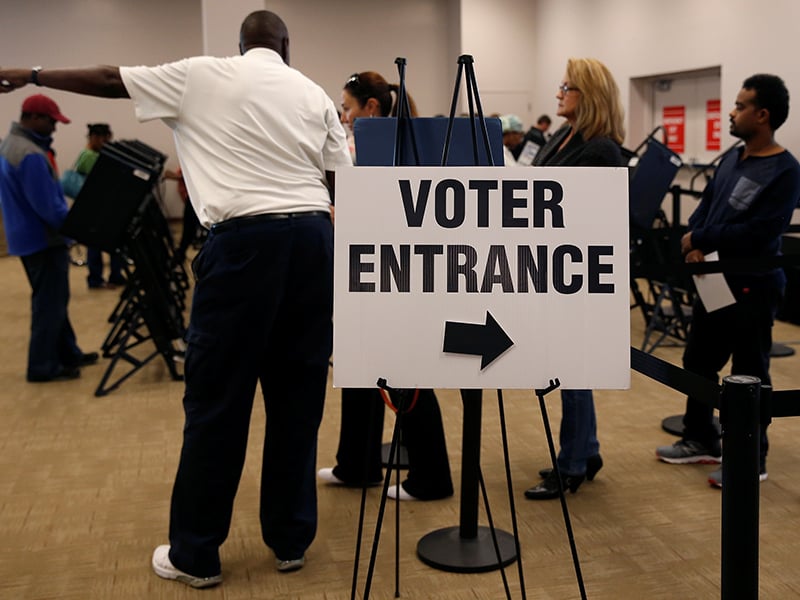 Voters wait in line to cast their ballots during early voting at the Franklin County Board of Elections in Columbus, Ohio, on Oct. 28, 2016. Photo courtesy of Reuters/Shannon Stapleton *Editors: This photo may only be republished with RNS-CATHOLIC-VOTE, originally transmitted on Oct. 31, 2016.

WASHINGTON (RNS) They are many, shift between parties and typically side with the candidate who ends up winning the White House.

That’s what makes Catholics the ultimate swing voters in the U.S. And this year they are going to throw their weight behind Democrat Hillary Clinton, a panel of political analysts said Monday (Oct. 31). 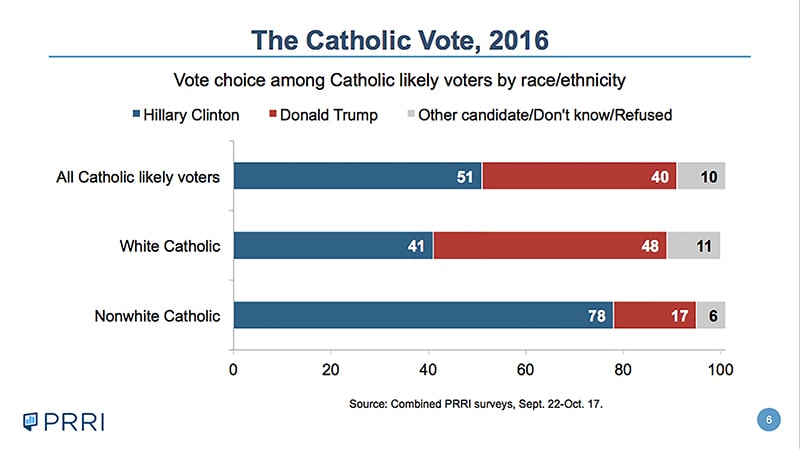 Catholics favor Clinton over Trump 51 to 40 percent, according to a recent survey from the Public Religion Research Institute, which co-sponsored the panel at the National Press Club.

But that’s not the end of the Catholic story this election season. Delve deeper into the poll numbers, and trends emerge that speak to the future of the group’s voting behavior in the U.S., where Catholics represent about 1 in 5 voters.

One reason that the group swings between parties is that “there really is no Catholic vote,” said Stephen F. Schneck, director of the Catholic University of America’s Institute for Policy Research & Catholic Studies, the panel’s other sponsor. Neither major political party sufficiently embraces Catholic teaching to be an easy fit for Catholic voters, he said.

The Democrats are often a more comfortable home for so-called social justice Catholics, who appreciate Pope Francis’ emphasis on the poor and welcoming the stranger. More traditional Catholics, particularly those who take the church’s opposition to abortion most seriously, more often side with Republicans, who consistently place a firm anti-abortion plank in their platform.

But one divide among Catholics makes itself clear in polls: the Latino/white split.

Catholics overall have gone with the winner in the presidential race consistently, said Robert P. Jones, CEO of PRRI. “But that’s happened because of some interesting push and pull underneath the surface of that water between white and Latino Catholics. … It’s not that Catholics overall are just evenly divided. But it’s these two subgroups that are pushing in opposite directions.”

Latino Catholics’ preference for Democrats in recent presidential elections has not been as overwhelming as it appears this year: Panelists noted how Trump has offended Latinos. He has demeaned Latino immigrants and promised to build a wall on the country’s Southern border, and said a respected Latino judge can’t be impartial because he is Latino.

The Latino vote might look less emphatically Democratic this year had the second or third place winners in the GOP presidential primaries — Sens. Ted Cruz and Marco Rubio are Latinos — won the nomination.

No matter who the parties nominate, the influence of Latino Catholics is bound to grow. Two-thirds of Catholics under the age of 18 are Latino. “That’s the future of the church,” said Schneck. “The Hollywood image of American Catholicism as white ethnics — Irish, Italian, Polish and so on … is less and less an accurate one.”

But don’t write off white Catholics yet. Though diminishing in numbers and in the proportion of Catholics, they concentrate in many critical states in the primaries and general election. In places like Pennsylvania and Wisconsin, white Catholics make up about 3 in 10 voters, and about a quarter of the electorate in Ohio, Iowa, Nevada, Michigan and Florida, Jones noted.

“This is a very important constituency as we’re looking down the homestretch of the election,” he said.

PRRI’s surveys show that the gender gap between Catholic men and women on Trump is wider than it is among most religious groups, with 58 percent of white Catholic men favoring Trump compared to 38 percent of Catholic women.