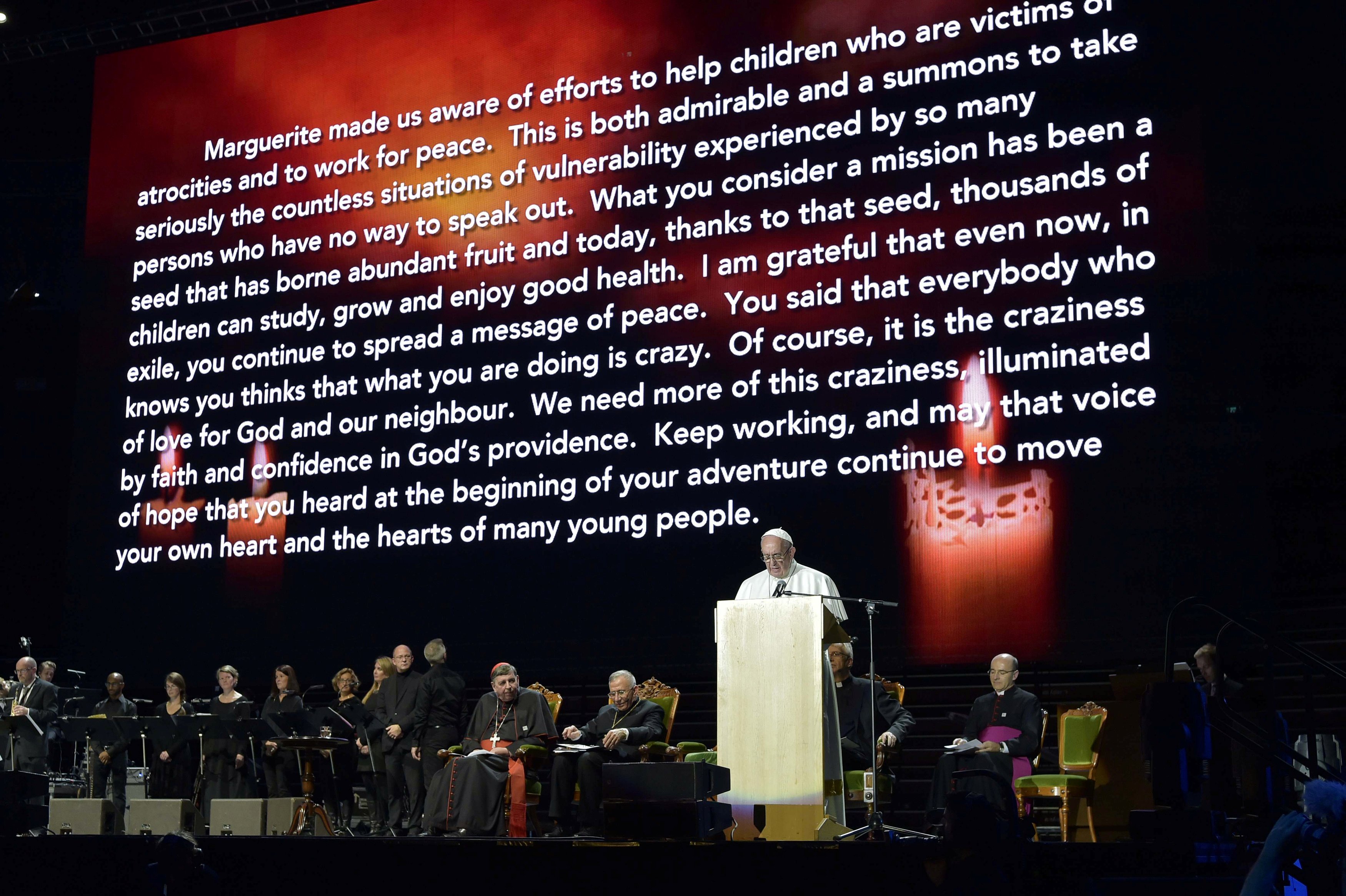 Pope Francis speaks during a meeting at the Malmo Arena in Malmo, Sweden, Oct. 31, 2016. Photo courtesy of Reuters/Osservatore Romano

ROME (RNS) Even by this pope’s standards it was a bold move.

Francis, the spiritual leader of more than a billion Roman Catholics across the globe, this week traveled to Sweden, one of the most secularized countries in Europe, to take part in events marking 500 years since Martin Luther kickstarted the Protestant Reformation.

Luther was excommunicated by Pope Leo X but Luther's ideas became a lightning rod for change in Europe and around the world, sparking brutal wars and leaving a long, lasting rift in Western Christianity.

But since Francis' election in 2013 he has made it his business to heal old wounds rather than dwell on the past -- be it helping the U.S. and Cuba re-establish diplomatic relations, opening up new channels with China or making overtures to Orthodox Christians, whose split with Rome is even older than the schism with Protestants.

His trip to Sweden was another piece in this radical reconciliation strategy, and it was rooted in a fervently held belief that Christians must overcome the “scandal” of their own divisions if they are to have any chance of presenting a convincing witness to others.

The Catholic Church has been formally engaged in discussions to bring about unity within Christianity since the reforms of the Second Vatican Council in the 1960s; the difference today is that it has a pope willing to speak to Protestant churches on equal terms.

In the past Rome acted a bit like the head teacher of ecumenical dialogue, suggesting other churches weren’t really churches and hoping to bring everyone over to its point of view.

Under Francis, however, Christian leaders are treated more like colleagues talking to each other on a level playing field.

During a joint Lutheran-Catholic ceremony in Lutheran Cathedral in Lund, the pontiff demonstrated this by going further than any of his predecessors in praising Luther, citing the former Augustinian friar’s once disputed idea that Christians achieve salvation through faith alone.

“The spiritual experience of Martin Luther challenges us to remember that apart from God we can do nothing,” Francis said on Monday (Oct. 31), the first day of his overnight visit, which began a year to the day before the official 500th anniversary of Luther nailing his 95 Theses denouncing Rome to the door of a German cathedral.

Francis also gave thanks to the Reformation for making Scripture a more central part of the Catholic Church’s life.

While some progress was made, and a path ahead seems clearer than ever on that crucial question, there is still a long way to go.

In the meantime, however, the two churches have found new divisions, mainly over homosexuality and the ordination of women.

While Lutheran churches worldwide have a diversity of approaches, the church in Sweden is one of the most progressive: It has openly gay pastors, it recognizes  same-sex marriage and its leader is a woman, Archbishop Antje Jackelen.

And to show how intractable the female ordination question is, on the flight back to Rome the pope ruled out women ever being ordained as priests in the Catholic Church.

“St. Pope John Paul II had the last clear word on this and it stands, this stands,” he said when asked about the issue during his in-flight news conference.

“But forever, forever? Never, never?” the Swedish reporter asked in a follow-up question.

Francis, referring to a 1994 document published by the late pope stating that female ordination was out of the question, replied: “If we read carefully the declaration by St. John Paul II, it is going in that direction.”

Aware of the difficulty these disagreements present, the pope used his trip to Sweden to emphasize instead the work Catholics and Lutherans can do together in helping refugees and saving the planet.

In front of a 10,000-strong crowd in an arena in Malmo, Francis heard from Rose Lokonyen, a refugee from South Sudan living in Kenya, who spoke about helping displaced people; from Pranita Biswasi, a Lutheran woman from Orissa, India, on the effects of climate change; and from the bishop of Aleppo, Antoine Audo, on the plight of Syrians.

But this focus on ecumenism as shared service left open the question over whether Catholics and Lutherans are pursuing what's been called an “NGO-style ecumenism,” where they in effect act like nongovernmental organizations working to try to save the planet while putting the doctrinal problems to one side.

The Rev. Martin Junge, secretary-general of the Lutheran World Federation, responded to these concerns by stressing that ecumenism has different strands, and they feed off one another.

Archbishop Jackelen added that it was refreshing to see the churches move away from condemning sexual transgressions and focus on sins against economic justice and the environment. These, she explained, had far “greater consequences.”

A pro-migrant and pro-environment stance can also be a successful strategy in a highly secular country such as Sweden, where polls show people have more faith in their country’s tax office than in the Church of Sweden.

Many Swedes praise the pope's openness to refugees and his efforts to reform the Vatican. Francis has also received good press for his friendship with Carlos Luna, an Argentinian living in Sweden whom the pope -- when he was a Jesuit in his native Argentina back in the 1970s -- disguised as a priest so he could escape the country’s military dictatorship.

Today, Luna helps refugees and other displaced people, and Francis donated one of his white skullcaps to be sold at an auction to raise money supporting Luna’s work.

These are the sort of stories and gestures that endeared Francis to Swedes: While a majority say they are nonbelievers, there is anecdotal evidence of an increasing interest in faith, if not organized religion. It is perhaps a nascent case of believing rather than belonging.

Furthermore, while most of the 9 million-strong population are nominally members of the Lutheran Church of Sweden -- founded after the Reformation by King Gustav Vasa and still closely tied to the state -- immigration is changing the religious landscape.

Numbers of Catholics are growing slowly and in some places are making use of underused Lutheran churches. Meanwhile, 5 percent of the population is Muslim, making Islam the second-largest religion in the country.

For Pope Francis, unity can’t be put on hold while debates about theology go on. Instead, he wants Christians to find an ecumenism that bypasses divisions and recognizes a simple truth he articulated in Sweden: “We realize that much more unites us than separates us.”

(Christopher Lamb is the Vatican correspondent for The Tablet of London, a Catholic weekly journal. He traveled to Sweden to cover the papal visit.)