If I were a member of the Religious Right’s old guard I’d be mad as heck at Russell Moore. “The movement’s institutional matrix,” Moore said last week in his Erasmus Lecture, “seems increasingly exhausted, resentful, and at war with its own future.”

“The internal family conversations about the brokenness of these movements and institutions were kept quiet, waiting for the inevitable generational transfers that could allow new starts. Those internal conversations were made cringingly public by the 2016 presidential campaign and the scandalous role of the institutional Religious Right in it.”

Sure, Moore didn’t actually name names. No “Jerry Falwell, Jr.” or “Pat Robertson” or “Ralph Reed” or “Tony Perkins” or “Robert Jeffress” or “James Dobson” or, indeed, “Richard Land,” the guy he succeeded as president of the Ethics & Religious Liberty Commission of the Southern Baptist Convention.

But everyone knows the names. They’re the generation, the institutional matrix, that’s backing Donald Trump, not that Moore could bring himself to name that name either.

The graver problem is with their flock, the white evangelicals who’ve sold their birthright for a mess of moral relativism. Just five years ago they were harsher than anyone else on politicians behaving badly. Now they’re more laid back than anyone else. 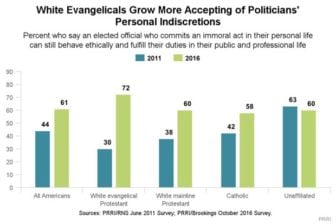 Thus, Moore told a questioner, religious folk had come to regard their political allegiances the way they regard their sports allegiances: “My party, my candidates, my ideology is an extension of me in a way that has become almost sacralized in American life.”

Meh. Here’s how one of Hillary Clinton’s rare prominent evangelical supporters put it to Politico: “I feel compelled to reject my community’s unquestioned political alignment with the G.O.P. and challenge my fellow evangelicals to reconsider.”

It’s not an artifact of American popular culture that white evangelicals are sacredly baked into the GOP. The alignment was the raison d’être of the Religious Right, going back to its birth in the 1980 presidential campaign. That’s why Trumpism trumped moral values this year.

Can a Religious Right exist independent of the Republican Party? If Russell Moore is as serious about saving it as he claims to be, he’s got to challenge his fellow evangelicals to reconsider too.