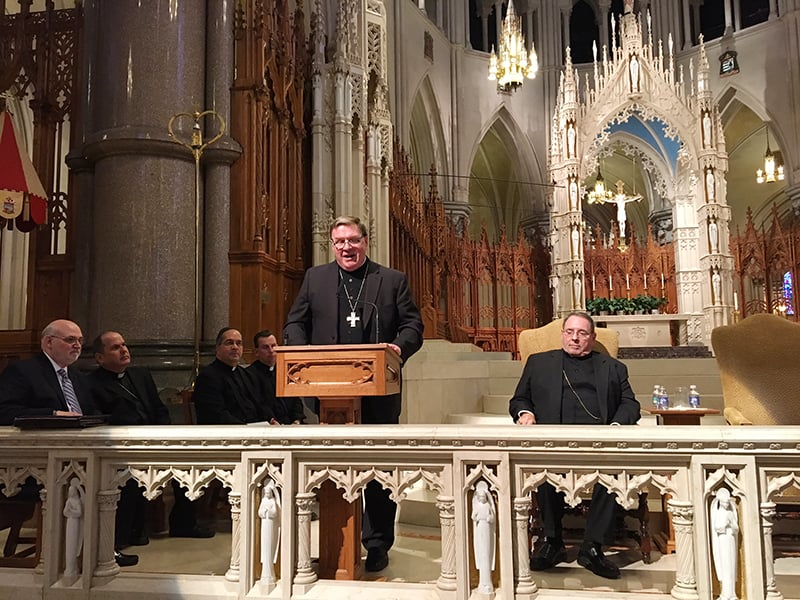 Cardinal-designate Joseph Tobin, 64, speaks to media at a news conference in Sacred Heart Cathedral introducing him as the next head of the archdiocese of Newark. Seated at his right is outgoing Archbishop John Myers, who reached the mandatory retirement age of 75. Tobin, who has been archbishop of Indianapolis, will be officially made a cardinal by Pope Francis later this month and he will become New Jersey’s first cardinal when he is officially installed in Newark on Jan. 6 next year. RNS photo by David Gibson

NEWARK, N.J. (RNS) New Jersey’s first cardinal knew he was walking into the global media spotlight and, as Pope Francis’ personal choice for the next archbishop of Newark, into a post that has suddenly taken on unusual significance for the future of American Catholicism.

But at a news conference on Monday (Nov. 7) introducing him to his new flock, Cardinal-designate Joseph Tobin, 64, handled it all with the grace, straight talk and self-deprecating  humor that have characterized his varied church career and made him beloved in the places he has served.

“Sometimes I think Pope Francis sees a lot more in me than I see in myself,” Tobin, who has been archbishop of Indianapolis, told reporters who repeatedly asked him why Francis had chosen him last month to be a cardinal and then promoted him to the Newark archdiocese.

Tobin repeatedly said he wasn’t sure why he was moved from his relatively small Midwestern diocese to this more prominent East Coast post, but it became apparent during his inaugural news conference — he took every question and stayed long afterwards to accommodate any interview requests — why he could be such a breath of fresh air.

Tobin is replacing Archbishop John Myers, who is 75 and retiring after a stormy tenure in which he alienated many with a hard-line approach to doctrine, with his questionable handling of clergy sex abuse cases, and with pricey renovations he made to a retirement home.

Francis had been looking for a replacement who shared his own pastoral approach to help heal the archdiocese, and he finally settled on Tobin, who pledged to listen and learn and move the archdiocese forward.

Still, both Tobin’s elevation to cardinal and his appointment to Newark, which was first reported by The Star-Ledger of Newark on Friday and made official by the Vatican on Monday, stunned church observers.

Indianapolis, which has just 230,000 Catholics, has never had a cardinal and no cardinal has ever headed the Archdiocese of Newark, even though it has 1.2 million Catholics. Such honors, and influence, were always reserved for prestige cities like New York and Philadelphia. But no more.

Tobin — who will officially be made a cardinal at the Vatican later this month and formally installed in Newark on Jan. 6 — also admitted he was shocked to be made a cardinal and then to get moved so quickly. “I am not sure my central nervous system can take much more news,” Tobin said, asking his audience to “forgive the occasional stutter or facial twitch.”

Tobin, a Detroit native, is a member of the Redemptorist order and has had a long and varied career, serving in parishes in the U.S. and in Rome as head of his global order from 1997 to 2009.

That’s when he was promoted to a job in the Roman Curia, the papal bureaucracy, working with religious orders.

But he ran afoul of the Vatican power brokers under then-Pope Benedict XVI when he objected to Rome’s investigation of American nuns over charges that they were not sufficiently orthodox.

In return, Tobin was sent to Indianapolis as a kind of ecclesiastical exile. Yet rather than a punishment, Tobin found a warm home there and said he shed many tears and spent “many sleepless nights” since he learned on Oct. 22 that Francis was sending him to Newark.

Tobin said again Monday that leaving Indiana was “gut-wrenching.” But he also called himself a missionary and welcomed the opportunity to learn about his new home and to do whatever he could to serve the church here and as an adviser to Francis, which is a role that will expand once he is a cardinal.

Tobin also made it clear that he considered himself a “Francis bishop” and wanted to bring a new direction to Newark. He cited Francis’ description of the church as a “field hospital” that must care for people wherever they are with mercy and tenderness and joy.

He also stressed that he intended to be “transparent” and to be in “regular and effective communication” with his flock and with city and state officials, and to show that the church preaches “not only with words but with actions.”

“I always feel like I’ve got my eyes on the other side of the tracks,” Tobin said in describing his approach to ministry.

As he has in the past, Tobin spoke of providing greater roles for women in the church, and he repeated that gay Catholics should never feel excluded; Tobin is one of the few bishops who uses the term “gay” to describe homosexuals. “We should call people what they call themselves,” he said.

Asked whether he would change the way his predecessor dealt with clergy sex abuse, Tobin said he was so new that he did not know the specifics of the situation and did not want to be drawn into details.

But he did blast what he called the “scourge” of abuse and added: “What I can promise is to look into anything that threatens the unity and witness of the church.”

He also did not directly answer questions about the controversy over hundreds of thousands of dollars that Myers spent renovating a retirement home. But he signaled that he has a much different style, noting that he has lived in many places and traveled often — and that he is the oldest of 13 children.

“You learn you can’t hog the bathroom, especially if you have eight sisters,” he said to laughs.

“I really don’t need very much to be happy,” he continued. “A cup of coffee in the morning, I can get through the day.”

Tobin was of course asked about Tuesday’s fraught presidential election — national political issues will come with his new, higher profile — an issue that has divided Catholics as much as the rest of the country.

He did not make any direct references to the candidates but he also did not adopt the culture warrior stance of some bishops who deplore both Donald Trump and Hillary Clinton but then insist that the Republican’s anti-abortion stances are the primary issue for Catholics.

Instead, Tobin lamented that Catholics seem to have “incorporated” the “blue state, red state mentality” into the church and said that rather than mirroring or amplifying divisions, the Catholic Church should serve as a tool of reconciliation once the bitter campaign ends.

He called political divisions in the church “obscene” and “blasphemous” and at the same time said he didn’t understand bishops who resisted Francis’ efforts to reorient the church’s ministry.

As for any rivalry with Cardinal Timothy Dolan across the Hudson River, Tobin responded with a laugh. Dolan, Tobin said, had called him that morning to congratulate him — and in typical Dolan style added, “There goes the neighborhood!”

The only real competition, Tobin said, would be in girth — both Tobin and Dolan would be in the big and tall department — and in who would work the hardest to minister to people.

And, perhaps, for who has the best laugh lines.