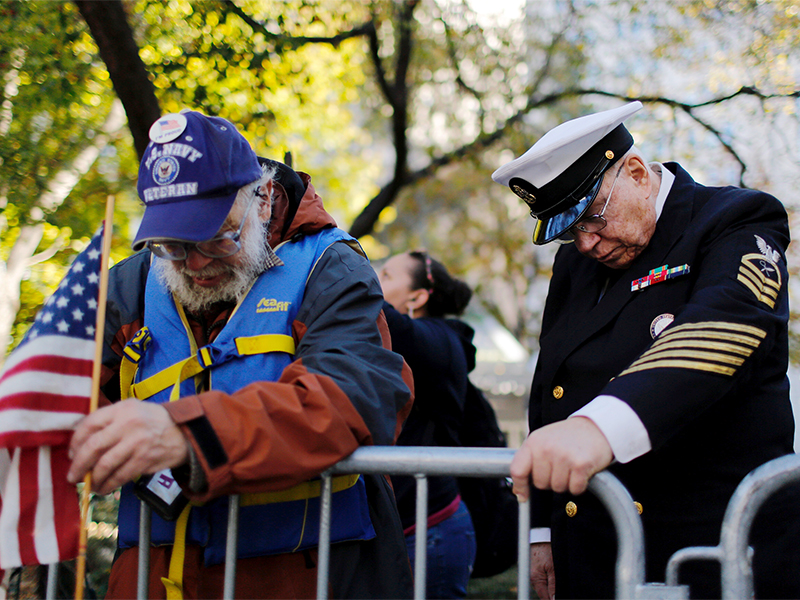 U.S. war veterans and military members pay their respects during a minute of silence while they attend a ceremony during the Veterans Day parade in New York City on Nov. 11, 2016. Photo courtesy of REUTERS/Eduardo Munoz
November 11, 2016
Yonat Shimron

(RNS) Veterans Day reminds me that I come from a military family. I call myself an “Army kid,” although some people surely consider me an “Army brat.” Growing up in Alexandria, Va., I spent much of my youth at nearby Fort Belvoir where my father was stationed.

He served as an Army officer for 25 years, including six years of active duty, and achieved the rank of lieutenant colonel. Both my parents are buried in Arlington National Cemetery not far from Alexandria, and their shared grave is in full view of the Pentagon building that houses the Department of Defense. My late brother was also an Army officer and served at Fort Bragg, N.C., the home of the famous 82nd Airborne Division.

So when I entered the U.S. Air Force as a chaplain immediately following my rabbinic ordination, I simply traded my family’s Army khaki uniform for Air Force blue.

During my years of active duty, I served in Japan at Itazuke Air Base, and made regular visits to Sasebo Naval Base, Iwakuni Marine Corps Air Facility, as well as Osan and Kunsan air bases in South Korea. I also was assigned to the Atomic Bomb Casualty Commission that was staffed by the U.S. Public Health Service in Hiroshima and Nagasaki.

My military rabbinic duties brought me into close professional contact with American Christian chaplains as well as Asian, Buddhist and Shinto leaders. My Air Force years left an indelible impression upon me and helped shape my later civilian career in interreligious relations.

Veterans Day is a good time to shatter the myth that clergy serving in uniform are not in any real physical danger because all they do is conduct religious services and teach classes in secure locations far from danger zones or actual combat.

The sad reality is far different. During World War I, 23 Christian chaplains were killed; 83 Catholic priests were killed in World War II, Korea, and Vietnam. More than 134 Protestant ministers have been killed since 1917, including one in Afghanistan. In 2011, a special section was dedicated at Arlington National Cemetery to honor the 14 rabbis who died while serving in the military: eight in World War II, two during the Cold War, and four in Vietnam.

The best-known rabbi killed in World War II is Alexander Goode who completed his seminary studies at Cincinnati’s Hebrew Union College in 1937 and then served congregations in Marion, Ind., and York, Pa. On Feb. 3, 1943 Goode died aboard the transport ship Dorchester in the frigid North Atlantic, 80 miles from Greenland, following a German submarine attack.

Tragically, there were not enough life preservers on the crowded troop ship, and Goode along with three other Army chaplains -- Methodist George Fox, Dutch Reformed Clark Poling and Roman Catholic John Washington -- gave their life jackets to others. Then, standing together and offering prayers, the four doomed chaplains drowned on the deck of the sinking vessel.

Of the 902 men aboard the Dorchester, a prewar cruise ship, 672 died, leaving 230 survivors. When news of the courageous actions of the chaplains reached the U.S., the nation was overwhelmed by a tragic sense of loss and moved by the extraordinary image of military clergy giving up their lives to save others. That image has become an iconic part of American history.

Being a chaplain provided me a unique view of the armed forces especially because military clergy preach peace, mercy and compassion within a large, highly diverse organization whose basic purpose is to employ deadly force to protect America. As a result, I discovered that military personnel frequently exhibit emotional tensions and personal ambivalences that are frequently absent in civilian life.

Military chaplains encounter many men and women who display extraordinary heroism and courage, often under enemy fire. Chaplains also recognize the inefficiency and waste frequently found within our armed forces.

Their unique personal faith commitment and pastoral training help them serve gifted and brilliant leaders as well as those men and women who hide their inadequacies and bad behavior behind uniforms decorated with rows of colorful medals and ribbons.

In other words, keen-eyed and spiritually acute military clergy are able to see the good, the bad, the beautiful, and the ugly within our armed forces, which, of course, reflect today’s American society.

(Rabbi A. James Rudin is the American Jewish Committee’s senior interreligious adviser. His latest book is “Pillar of Fire: A Biography of Rabbi Stephen S. Wise,” published by Texas Tech University Press. He can be reached at jamesrudin.com)