ANTEZANA DE FORONDA, Spain (RNS) The Iglesia de San Miguel is the pride of this tiny town in Spain’s Basque Country. Yet the 16th-century church, with its spectacular wooden carvings and baroque altarpiece, had fallen on hard times.

Residents had saved the church once, decades ago, when they mobilized to fight an airport extension, just steps away from their beloved sanctuary. In recent years, forces of nature and passage of time were taking their toll on the town shrine.

“We saw our cultural identity slipping away,” explained Diego Bermejo, a philosophy and ethics professor at the University of Deusto in Bilbao, who lives in the town, located near Vitoria-Gasteiz, the Basque capital.

“A town that lets its past die kills its future,” he said of Antezana, with scarcely 100 people and no public buildings other than the church. 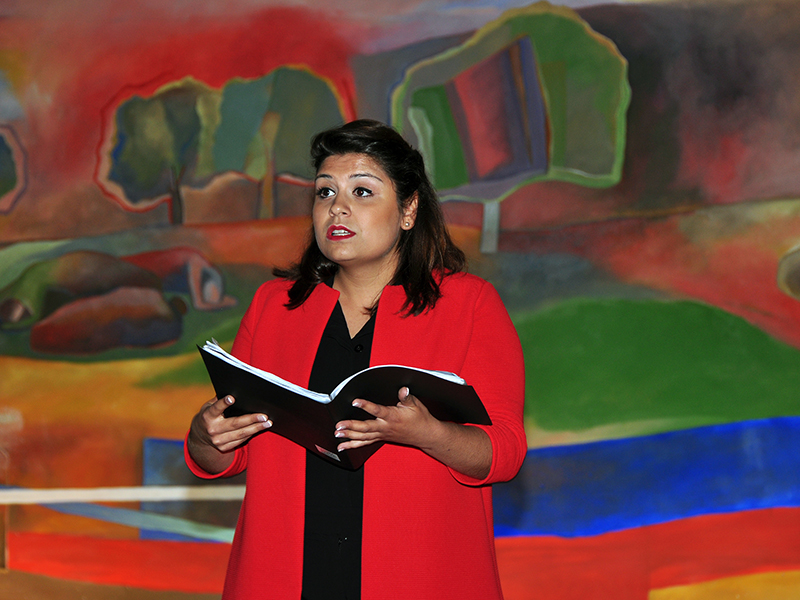 The Iglesia de San Miguel is an inviting backdrop for concerts like this one, featuring singer Helene Garcia Barrenetxea. Photo courtesy of Pablo Corres Ibanez

Bermejo and Mayor Jose Luis Alonso and other activists wanted to change that paradigm and revive and strengthen the cultural history of the town, preserving a space where church rituals would be observed, while welcoming people for concerts, dance performances and theater.

Once again the town pooled its resources, stabilized the church walls, sealed the cracks and repaired the roof.

But the townspeople were hardly finished.

It just so happened a 68-year old former Franciscan monk and fine artist undertook a spiritual journey to the Basque capital.

In 2011, when he stepped into the church for the first time, the bare walls and gilded baroque altarpiece spoke to him.

“I knew I was on a journey but had no idea where it would lead,” said Xabier Egana.

Egana had painted murals in the Basilica of Arantzazu, which is one of few examples of Spanish religious art and architecture from the second half of the 20th century.  (Antoni Gaudi’s Sagrada Familia in Barcelona is another.)

The project linked Egana with artists in the Basque Vanguard, a Neo-Expressionist movement that arose out of the Spanish Civil War and the rejection of dictator Francisco Franco.

Since that time Egana has had a career as a teacher and visual artist, with exhibitions and commissions in churches and civic buildings in Spain, Germany and Puerto Rico.

Largely retired, Egana offered to do the work in San Miguel for free.

“It was never about money. The town wanted their church back and I could help realize that dream and earn their gratitude,” he said. “That’s payment enough.”

Bermejo, frustrated with the delays, urged Egana to start what he calls a kind of “pirate art project,” painting the church portico before regional church authorities or civic officials granted permission to move forward.

“It would be an open invitation for residents, religious, civic and business leaders to join in the project,” Bermejo said. “If they didn’t like it, then we’d paint over it.” 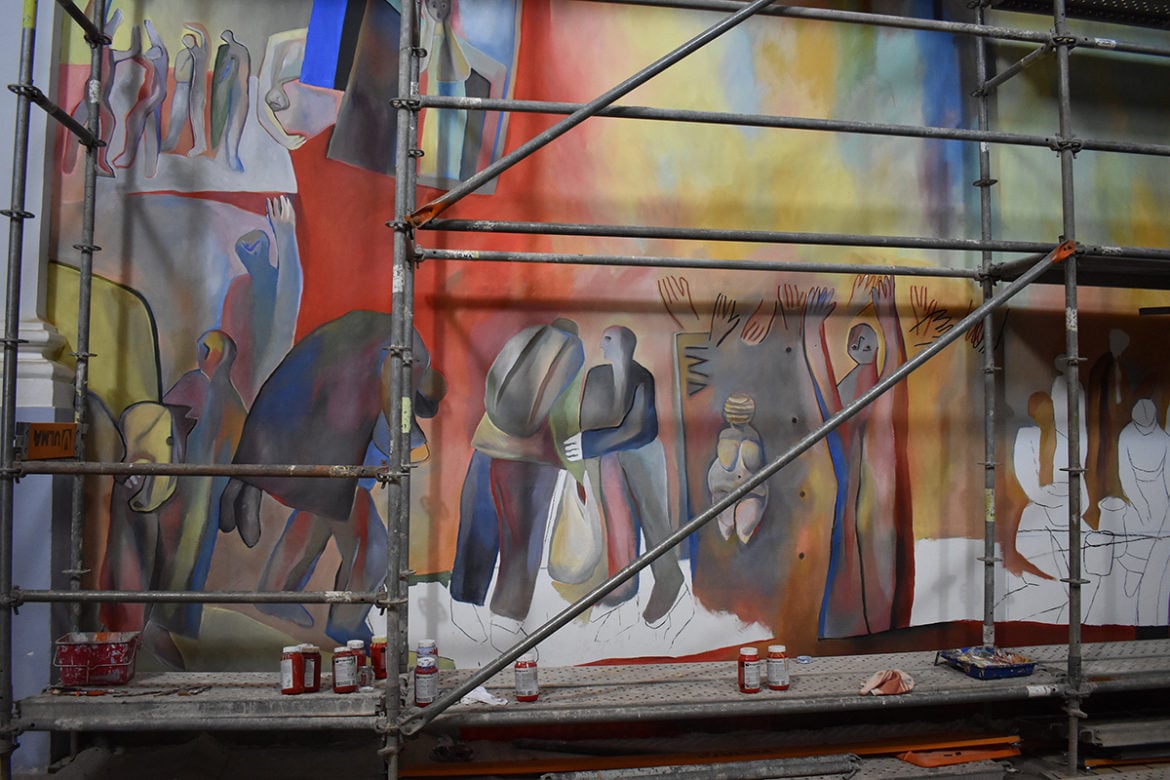 A wave of praise celebrates Mother Earth with a likeness of the tiny stone-age carving, the Venus of Willendorf. Photo courtesy of Jose Luis Alonso Quilchano

That summer Egana filled the gateway with familiar images: the nearby airport control tower, upside-down flying airplanes and a protest march leading to the airport with a figure of the Virgen de Armola, a reference to the imposing development.

Neighbors were also pictured singing and dancing under a deep blue sky in a romeria, a popular outdoor religious festival.

The town was captivated. “We showed what was possible,” said Bermejo. Support from the diocese followed shortly after that.

Egana began to map out the cavernous space for what would become “Pinturas Para La Vida” or “Paintings for Life.” 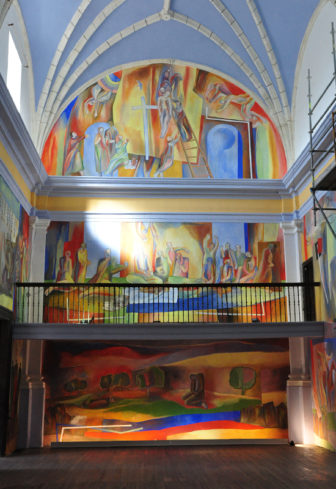 Images flooded his mind and notebooks. His idea was to join 50-foot-high by 25-foot-wide walls into a single narrative based on sketches he had made over the two previous years.

“You take steps, sometimes with assurance, other times with doubts,” he said.

Once scaffolding was erected and Egana set to work, what emerged was a mixture of the sacred and the secular with a resounding humanity.

“His work expresses what it means to be human confronting the meaning of existence, in the drama of life and death, hopes and dreams,” Bermejo said.

Egana stitched together biblical stories with historic events and literary allusions. The choir walls are a massive triptych that covers the final moments in the life of Jesus with the Last Supper, Judas’ betrayal, Jesus praying in Gethsemane and his death and resurrection under a tormented reddish sky. Larger-than-life looming black shapes represent Roman soldiers who have come to take Jesus prisoner.

Other dark shadows in the mural mirror the biblical narrative in contemporary times: the murder of five labor organizers killed in church during Franco’s dictatorship.

Drawings on the sidewalls chronicle Adam and Eve and the Four Horsemen of the Apocalypse, the former a commentary on the beginning of human history and the latter the end times as described in the last book of the New Testament.

Egana relates their stories to suffering and injustice in the modern world: He illustrates the psychological torment expressed by Edvard Munch’s “The Scream,” juxtaposed on the opposite wall with a young boy manically drumming, a reference to Nazi horrors as depicted in Gunter Grass’ novel “The Tin Drum.”

That kind of conversation is carried from one wall to the next. Among the nearly 150 vignettes woven into the mural: an Ottoman era bridge destroyed (and now rebuilt) in Bosnia and Herzegovina, a nuclear power plant, tombstones from the Old Jewish Cemetery in Prague. “Each has a purpose, a reason for being in relationship to everything else,” said Alonso.

Throughout Spanish history, the church and privileged classes called on artists in times of widespread illiteracy to decorate cathedrals, castles and monasteries with biblically inspired altarpieces, tapestries, sculptures and paintings, said Edorta Kortadi, director of the Religious Art Museum at the Santa Maria del Coro Basilica in San Sebastian.

“As life became more secular, so did church art,” Kortadi said. “During the 20th century the subject matter becomes thematically less religious in the hands of great masters like Picasso, Chagall, Matisse or Americans like Rothko, Pollock. Egana is clearly influenced by them.”

Egana has become a town treasure, with a crew of devoted fans who follow his daily work, helping to lug paint jugs up and down scaffolding and doing other chores that allow the work to go smoothly.

“The murals not only celebrate our cultural identity, but transcend it,” said Alonso, confident this hidden jewel in the Basque Country will draw people to Antezana.

Egana, now 73, is near the end of his pilgrimage.  He expects to complete the work by next summer.

“My intent was not to preach, but to inspire reflection,” he said. “I hope this becomes a spiritual space where anyone of any religion or any faith can contemplate the mysteries of life.”

(Rosanne Skirble is a freelance journalist) 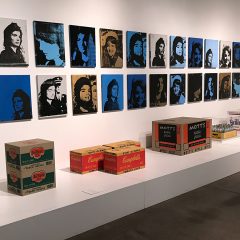 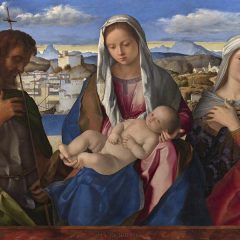