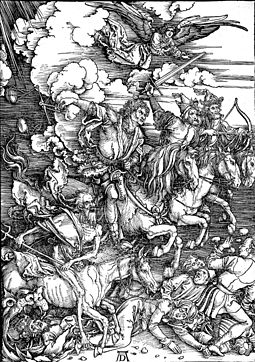 The Horsemen of the Apocalypse, woodcut by Albrecht Dürer
November 21, 2016
Mark Silk

The Horsemen of the Apocalypse, woodcut by Albrecht Dürer

Since the election, some Americans have found consolation in the line that Martin Luther King, Jr. adapted from the 19th-century Unitarian divine Theodore Parker: "The arc of the moral universe is long but it bends toward justice."

So maybe the arc just got longer. So maybe justice for the poor, the sick, and the stranger among us is farther off. We're still headed in the right direction.

But what if time runs out?

It is running out. The Four Horsemen of the Apocalypse -- famine, pestilence, war, and death -- are saddled up. Greenhouse gas emissions are raising the temperature of the Earth to a point of no return.

Global warming -- let's stop calling it "climate change" -- is more important than immigration, manufacturing jobs, Obamacare, ISIS, financial regulation, religious liberty, abortion, Medicare, black lives matter, and the white working class. It will destroy the moral universe itself, so far as it exists on this planet.

The only comparable threat, nuclear winter, requires the possessors of hydrogen bombs to detonate them. Global warming will destroy life as we know it without anyone doing anything. Only massive efforts by governments around the world can stop it.

Pope Francis recognized this in his remarkable 2015 encyclical Laudato Si'. The same year, the Paris Agreement indicated that governments were prepared to take some modest steps.

By all rights, there should have been a national discussion this election cycle on what steps the U.S. must take. It never happened. In three presidential debates and a vice presidential one, not a single question was asked on the subject.

We elected a man who has called global warming a hoax perpetrated by China. Who represents a party committed to doing nothing about it. Who has appointed a leading skeptic to head the transition at the EPA.

It's only human to put aside thoughts of death, inevitable and fast approaching as it is. We do so to get up in the morning, to enjoy what we can for as long as we can, to help those who will outlive us. But it is the job of religion not to let us forget our personal mortality.

It's also human to put aside thoughts of the collective mortality that is fast approaching. We need to get up in the morning and enjoy what we can for as long as we can. But if we care about our children and our children's children, we can't afford to put those thoughts aside.

Religion has a job to do here too.

In the second century BCE, the Roman senator Cato the Elder ended every speech he gave on any subject with the line, "And by the way, Carthage needs to be destroyed." Within a few years, it was.

Those who are in the business of giving sermons should think about ending each one with a comparable line on global warming. The arc of the moral universe depends on it.