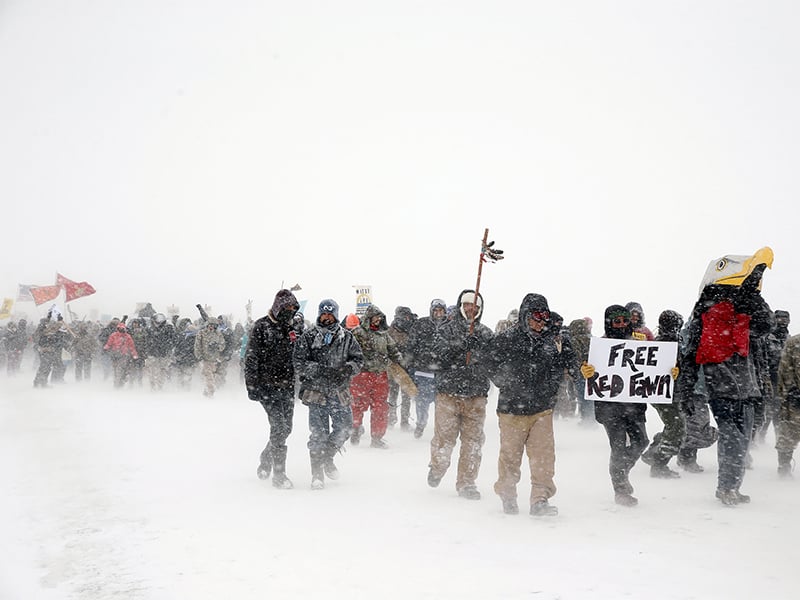 Veterans join activists in a march just outside the Oceti Sakowin camp during a snowfall as "water protectors" continue to demonstrate against plans to pass the Dakota Access pipeline adjacent to the Standing Rock Indian Reservation, near Cannon Ball, N.D., on Dec. 5, 2016. Photo courtesy of Reuters/Lucas Jackson *Editors: This photo may only be republished with RNS-SILK-COLUMN, originally published on Dec. 6, 2016.
December 6, 2016
Mark Silk

Let's not kid ourselves.

Sunday's decision by the Army Corps of Engineers to seek an alternate route for the last leg of the Dakota Access pipeline is no cause for rejoicing.

Yes, the Standing Rock Sioux Tribe succeeded in protecting the waters of the Missouri River and sites sacred to them, perhaps more than temporarily. A coalition of supporters on-site and around the world can take satisfaction in a show of solidarity for indigenous rights and environmental protection.

But we should be way past this point.

It was the usual liberal-left religious suspects who stepped up -- mainline Protestant denominations, Reform Jews, Evangelicals for Social Action, the Franciscan Action Network, the Leadership Conference of Women Religious. The dogs that needed to bark didn't.

Neither hide nor hair was seen of those staunch Catholic and evangelical defenders of the right of faith-based nonprofits to keep their female employees from getting free contraceptive coverage. Protecting sacred burial sites evidently doesn't count as religious liberty to Archbishop William Lori, the Becket Fund and the American Center for Law and Justice.

But these issues cut no ice with the Catholic bishops of North and South Dakota, or with the U.S. Conference of Catholic Bishops itself, whose silence on the Dakota Access pipeline was deafening. "Pope shmope" seems to be the USCCB's attitude when it comes to "Laudato Si'." Nary a peep either out of the National Association of Evangelicals or the Southern Baptists' Ethics and Religious Liberty Commission.

Meanwhile, the Obama administration, as usual, showed itself to be a late responder to climate change concerns. It should long since have called a halt to permitting fossil fuel infrastructure to be built on public land.

If you want a sense of what the latest science actually says about the imminence of the warming threat, read this. Even Republican senators, in thrall as they are to the fossil fuel industry, are alarmed.

Last spring, the Senate Appropriations Committee passed a proposed funding bill for the Department of Energy to start studying geoengineering techniques to reflect more sunlight from the Earth. Such "albedo modification" would cost trillions and carries its own huge risks to life on Earth.

God may, as Shane Claiborne writes, have heard the Standing Rock protesters' cry for justice. But the future of the planet requires an alternative route entirely different from the one the Army Corps is now seeking.