MUMBAI, India (RNS) On a recent hot afternoon, more than 200 women walked a winding path to the tomb of the Muslim saint Pir Haji Ali Shah Bukhari, one of the city’s most recognizable landmarks and a holy place visited by more than 30,000 people of all faiths every day.

For members of the Bharatiya Muslim Mahila Andolan, a Muslim women’s activist group, the 10-minute march was the culmination of a four-year battle.

Since 2012, women going to the dargah, or tomb, found themselves barred from entering the inner sanctum by trustees who said their entry was un-Islamic.

That sparked a campaign to reverse the ban. In August, the Bombay High Court agreed that nothing in Islam forbids their entry and that safety concerns were unsubstantiated. The interior of Haji Ali Dargah in Mumbai, India, on Feb. 25, 2013. Photo courtesy of Colomen via Creative Commons

The dargah trustees appealed the decision to the Supreme Court, but later said they would comply with the high court’s order.

“It’s a first of its kind victory from the point of view of equal access to an Islamic place of worship in India,” said Noorjehan Safia Niaz, co-founder of  the BMMA, a national platform for Muslim women, and one of the petitioners who took the matter to court.

On their Nov. 29 march to the tomb, the women were allowed in and invited to tea and prayers.

Raju Moray, the lawyer who argued the case for the group, said such struggles are difficult because courts are hesitant to interfere in religious matters.

The trustees argued from an Islamic standpoint. But Niaz said the group was able to counter those arguments with Quranic verses on gender equality.

The BMMA found that of 19 dargahs or tombs they surveyed in Mumbai, six prevented full access of women inside. Some however, never allowed women inside, making them different from the case of Haji Ali Dargah.

Moray said the Bombay High Court ruling would have a “persuasive value” in other court cases.

On the day of the judgment, some members of the group began dancing and rejoicing in the hallways of the court complex itself.

“It is a fight by all women, not just Muslim women,” said Bharthi Shetty, 32, a BMMA activist who identifies as Hindu and who came to hear the judgment pronounced. “It felt like a victory for all women.” 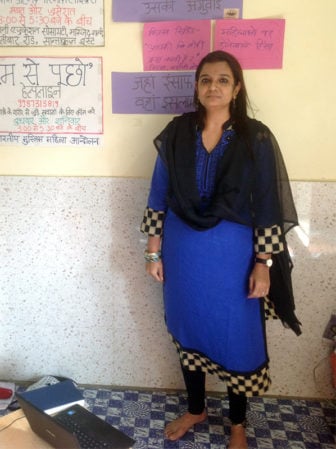 But for the BMMA this is only the first of many battles. The 10-year old organization of more than 50,000 members across the country has set its sights on nothing less than structural change.

“We are trying to create a voice for Muslim women in the community,” said Niaz. “One thing is to complain about existing structures, the other is to create alternative structures.”

The BMMA has been working on educating women as kazis — or Islamic scholars — and training them to hold Shariah courts to counsel Muslim women with marital problems. Such roles have been the preserve of men so far.

The group is also a party to a case before the Supreme Court that asks to annul the Muslim practice in which a Muslim man can divorce his wife just by uttering “talaq” three times.

For their work they have been targets of vicious attacks, especially from conservatives.

The battle for more gender-sensitive practices in religion has been particularly fraught in the past year.

At Shani Shingnapur temple in Maharashtra women tried to storm the temple after being refused access into the sanctum. The matter later went to court. While hearing another case in April, the Supreme Court questioned a ban on women ages 10 to 50 entering the Sabarimala temple in Kerala. That case has not been decided.

(Bhavya Dore is an RNS correspondent based in Mumbai)