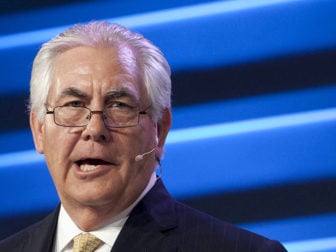 It is amusing, if you’re into gallows humor, to find Family Research Council Tony Perkins with his knickers in a twist over President-elect Donald Trump’s designating Exxon-Mobil Chairman and CEO Rex Tillerson as his secretary of state.

Perkins hates it that, as president of the Boy Scouts from 2010 to 2012, Tillerson successfully pushed for the admission of gay scouts. And that his company contributes to the evil Planned Parenthood.

He also doesn’t like Tillerson being real cozy with Russia, to the point of receiving its Order of Friendship from the hands of Vladimir Putin. Or that he is on record supporting a carbon tax, which I guess constitutes a grave sin against family values.

The truth is, the guy is a classic Establishment Protestant.

Though he comes from Texas, he’s no evangelical. He belongs to the National Association of Congregational Christian Churches, a small mainline Protestant body that declined to participate in the merger that created the United Church of Christ in the 1950s on the grounds that this might weaken congregational autonomy. In 2012, he and his wife gave the NACCC between $5,000 and $10,000 to support its mission program.

As to Russia, think of Armand Hammer, the president of Occidental Petroleum back in the last century, whose closeness to the Soviet Union was legendary even as he supported Republican politicians like Richard Nixon. Of course, no one ever suggested making Hammer secretary of State. He was a back-channel guy.

Which brings us to the carbon tax.

Compared to his predecessor at Exxon-Mobil, Tillerson seems reasonable on the issue of climate change. That was the whole idea in his elevation to the top job. In 2007 he stated, “We know the climate is changing, the average temperature of the earth is rising, and greenhouse gas emissions are increasing.”

At the beginning of the Obama Administration two years later he announced his company’s support for a carbon tax. Whether that support was bona fide, however, is open to question. As David Kaiser and Lee Wasserman describe it in the latest issue of the New York Review of Books:

The climate measure then under active discussion in Washington, however, was a cap-and-trade bill. There was almost no political support for a carbon tax at the time, and Tillerson’s announcement may have been meant to divert support from the reform that seemed most plausible.12 Indeed, since then, although ExxonMobil continues to claim that it supports a carbon tax, it has given much more money to members of Congress who oppose such a tax than to those who endorse one.13 As of last year it was still funding organizations that deny global warming or fight policies proposed to address it.14 And at its annual shareholder meetings it still fiercely resists almost all meaningful resolutions on climate change.15

If you don’t think Tillerson’s a smooth operator, just watch his speech at that bastion of the American Establishment, the Council on Foreign Relations, in June of 2012. With his gentle Texas drawl, he spins the position that his company worked out to spike the guns of global warming alarmists.

No, climate change isn’t the most important problem facing the world today. Poverty is — and those poor people desperately need electricity. As for the changing climate, well, “It’s an engineering problem, and it has engineering solutions.”

But if you’re looking for a silver lining in the incoming administration’s approach to climate change, Tillerson’s the closest thing to it. In contrast to Oklahoma Attorney General Scott Pruitt at the EPA and Rick Perry at the Department of Energy, he will understand the science and recognize the need for serious action to stop greenhouse gas emissions.

In this post-truth Christmas season, let us pray that he will take to heart Jesus’ words from John 8:32: “Ye shall know the truth and the truth shall set you free.”