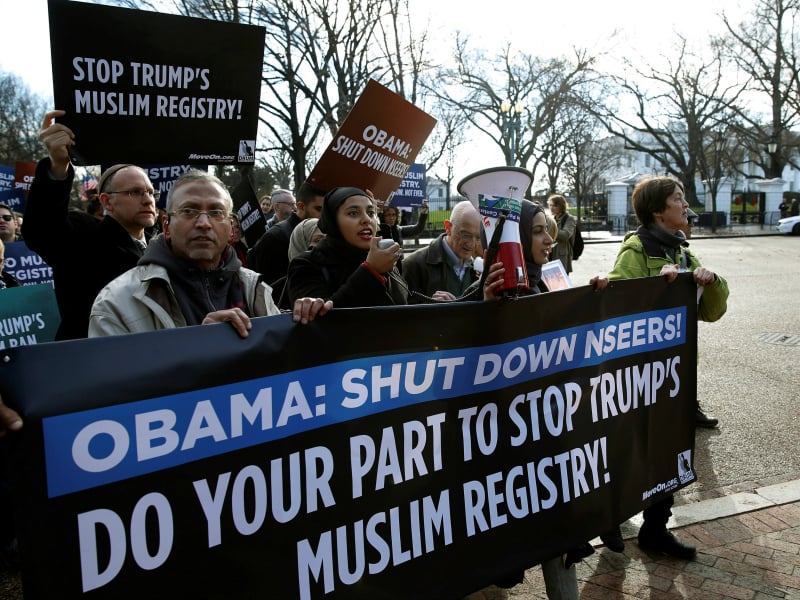 Members of Join MoveOn and DRUM march past the White House during a protest to shut down the existing Muslim registry program NSEERS in Washington, D.C., on Dec. 12, 2016. Photo courtesy of Reuters/Gary Cameron
December 22, 2016
Reuters

WASHINGTON (Reuters) — The U.S. government is canceling an inactive registry program for visitors from countries where extremist groups are operating, a plan similar to aMuslim registry considered by President-elect Donald Trump.

The rule change will be published in the Federal Register on Friday and takes effect immediately.

DHS concluded that the program, which was suspended in 2011, was redundant and inefficient and did not provide increased security. Begun a year after the Sept. 11, 2001 al Qaeda attacks on the United States, the program expanded within a year to require registration from visitors from 25 countries, most of them with majority-Muslim populations.

"The intervening years have shown that NSEERS is not only obsolete but that its use would divert limited personnel and resources from more effective measures," Hakim said.

Trump was asked on Wednesday whether he would support aMuslim registry, similar to the dormant DHS program, and he would not confirm or deny his plans to do so.

Several Trump transition aides have told Reuters the incoming Trump administration will not resurrect the program, although a key Trump immigration adviser, Kansas Secretary of State Kris Kobach, has advocated the idea.

The announcement came as a growing number of prominent tech companies including Facebook, Twitter and Apple have told various news organizations that they would not help the Trump administration build a Muslim registry.

Earlier this month, employees at dozens of technology companies also signed an online pledge vowing not to help Trump build a data registry to track people based on their religion or assist in mass deportations. The petition has been signed by more than 2,500 employees.

The Obama administration's decision to formally end the program drew praise from critics who said it was discriminatory.

"I applaud President Obama for his decision to dismantle NSEERS, the idle and ineffective federal registry that targetedMuslims and undermined our core values," New York Attorney General Eric T. Schneiderman said in a statement.

At one point in his campaign, Trump called for a temporary ban on Muslims entering the country as a means of fighting terrorism. That drew widespread criticism at home and abroad, and Trump revised his proposal to suspending immigration from regions deemed as exporting terrorism and where safe vetting could not be assured.

Trump adviser Kellyanne Conway was asked on Thursday if the president-elect has backed away from the idea of a Muslim registry.

"Well, he said during the campaign long after he had originally proposed that, that this would be more strictly tied to countries where we know they have a history of terrorism" Conway said on ABC's "Good Morning America."

"This is not a complete ban," added Conway, who was named Trump's White House counselor on Thursday.

Kobach, the Kansas secretary of state who helped write tough immigration laws in Arizona and elsewhere, told Reuters last month that Trump's policy advisers had discussed drafting a proposal to reinstate a registry for immigrants from Muslimcountries.