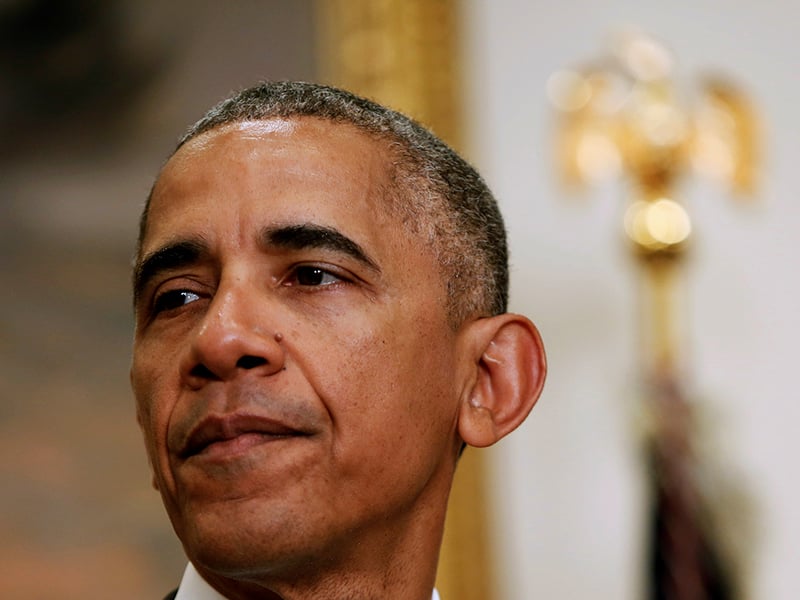 U.S. President Barack Obama, delivers a statement from the Roosevelt Room on Afghanistan at the White House in Washington U.S. on July 6, 2016. Photo courtesy of REUTERS/Gary Cameron
December 26, 2016
Jeffrey Salkin

(RNS) When it comes to Jewish politics, I live in the equivalent of a large cardboard box by the side of the road.

And the recent UN resolution only makes that clear to me.

On Friday, the Obama administration abstained from the United Nations Security Council vote on a resolution that condemned Israeli settlements.

After defending this President over the last eight years, I am angry and disappointed. As the late Leonard Cohen sang: "Hey, that's no way to say goodbye." (And check out what the crowd is singing to Leonard in the video!)

To be clear: I am not a fan of Israel's settlements.

But, not all settlements are created equal.

I remain opposed to those ideologically-based settlements in the heart of the West Bank that will prevent the creation of a contiguous Palestinian state.

But, other settlements, contiguous to pre-1967 Israel, would wind up in Israel as part of a comprehensive peace settlement, along with land swaps.

Furthermore, to include East Jerusalem in this conversation suggests that the Jewish Quarter is also a settlement. This is historically inaccurate and unacceptable.

So, why am I politically homeless?

To paraphrase the biblical description of the parted Red Sea: I have come up against a wall on the left, and a wall on the right.

The wall on the right: The United States abstention at the United Nations was a Hanukkah gift for right wing Jews.

And why? For the past eight years, they have been saying that Barak Obama is anti-Israel and even anti-Semitic.

America’s commitment to Israel’s security is unshakeable. Our friendship with Israel is deep and enduring. And so we believe that any lasting peace must acknowledge the very real security concerns that Israel faces every single day...

Israel, a small country of less than 8 million people, looks out at a world where leaders of much larger nations threaten to wipe it off of the map. The Jewish people carry the burden of centuries of exile, and persecution, fresh memories of knowing that 6 million people were killed simply because of who they are.

The Jewish people have forged a successful state in their historic homeland. Israel deserves recognition. It deserves normal relations with its neighbors. And friends of the Palestinians do them no favors by ignoring this truth, just as friends of Israel must recognize the need to pursue a two-state solution with a secure Israel next to an independent Palestine.

And, finally, the Jewish right should note that Obama was so close to the Jews that some Muslims accused him of "dancing to Jewish tunes."

Yes, the Obama administration blew it at the UN on Friday.

But, that failure is insufficient to damn that administration's entire relationship to Israel -- which has been, to say the least, complicated.

The wall on the left:  This vote will encourage the indictment of Israeli soldiers on war crimes charges. It will strengthen the BDS movement on college campuses, where Jewish kids are most vulnerable.

And it will further convince Republicans that they "own" support of Israel, continuing to make Israel into a partisan political issue.

I have admired President Obama -- for his character, family relationships, even and especially his sense of humor.

The way that he has handled foreign policy -- not so much.

Obama’s legacy is a half million dead in Syria, the refugee influx in Europe which could lead to the breakup of the EU and the rise of the radical right, the rise of Iran as a conventional power that is devouring one Sunni country after another even as it is on a slower but now-inevitable track to becoming a nuclear power, the diminution of American power and prestige—and now, legitimizing BDS and the criminalization of Israel.

What gives me hope?

Consider the criticism of the United States inaction that comes from my rabbinical group, the Central Conference of American Rabbis:

Peace negotiations belong between the two parties involved. Further, the UN's obsessive and relentless criticism of Israel, while ignoring the unspeakable repression committed by illegitimate regimes and terrorist organizations worldwide, falsely and maliciously labels Israel uniquely as a pariah state.

Likewise, the opposition to the UN action from the URJ.

Please note: Reform institutions are usually to the left. This latest condemnation means something powerful: that we can use the prophetic imperative to critique power, wherever it might be.

And so, I am not really homeless. My political home remains a narrow perch -- in the center, critiquing the pieties of both the left and the right.

Anyone want to join me?