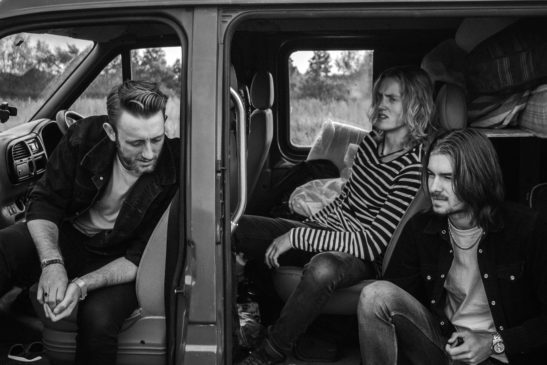 Nathan Clarkson's mother, Sally, is a popular Christian author and leader with a growing following. But growing up, he felt like the opposite of the picture perfect Christian kid. He often acted out in school, rebelled against his parents, and was bullied for being different. He battled depression and anxiety, and was diagnosed with OCD, OCC, ADHD and other learning disabilities. Each condition tried the strength of their relationship and tested the limits of their love.

Nathan is now in his twenties and he has coauthored a book with his mother about their journey titled, "Different: The Story of an Outside-the-Box Kid and the Mom Who Loved Him." In it, they share how they overcame relational obstacles through seeking to understand each other and seeing his "differences" as superpowers.

I decided to chat with Nathan about what it means to love, accept, and embrace someone despite their sometimes frustrating differences. His words illustrate the holiness of difference are helpful for anyone who's ever struggled to relate to friends and family that don't fit the mold you'd wish for them.

RNS: When did you realize that you were "different?" What does this word entail for you?

NC: I wish I could look back to one specific time in my life where I learned that I was different and fully accepted it. But the truth is I am still, even in my 20's, finding new ways I am "different" from the world around me.

The earliest I can remember is when I would look at all the other kids being able to sit still and listen. I would be moving non-stop, mind constantly changing channels, and unable to not question everything and everyone. When other kids could walk on the sidewalk, I was constantly climbing the rails. When other kids could be good, I was getting in trouble. So it was there--in the classrooms, home, and timeouts--that I began to realize that I work differently than others around me. RNS: What advice would you give to parents who realize their children are different? How can they make room to process without hurting their children?

NC: I think we have this picture in our head of what a “normal” child looks like. It’s my belief that every child is different. My differences might have been louder, but every kid is utterly unique, each with traits, strengths and weaknesses unique to who they are and the story only they can tell. I guess my advice would be let go of the expectations of what your child should be, and embrace who they truly are.

NC: I still struggle with the idea that I am “bad." I’ve had multiple teachers yell at me countless times to tell me that my obsessive compulsions and anxiety were just for attention. For years, I was bullied because I talked, walked and lived differently than those around me.

I think we fear what we don’t understand, and I am a whole heap of mysteries that even I don’t get. So, I understand that people react the way they do when confronted with something or someone out of their norm, someone they can’t fix or fit into a box of expectations. Bearing disapproval from the world at not being what they want can be a heavy load to bear.

RNS: You say “who we are is important, but finding where we are allowed to thrive as who we are is just as crucial.” How do parents make home a place for different children to thrive?

NC: I think it begins with listening to your child. Find out who they are, what they like and dislike, and who they want to be. From there you can begin, not controlling, but facilitating, and encouraging your child towards the best version of who they really are.

Being a “different” kid, my interests would fly from one thing to another, one day it would be drums, another day it would be large stage magic, then eventually it was  acting school. Yet, at every turn my parents were there, supporting what was on my heart, trusting that God had made me the way he wanted. So that now I can look back and see a pattern of support in who I was, and God created me to be, that led me to the story I’m telling now.

RNS: You say that you turned your difference into "superpowers." What does this mean?

NC: As a kid with OCD, ADHD, anxiety, and a whole list of learning disabilities, just getting through the day could be a daunting task. When I felt overwhelmed, I looked to stories. Stories are powerful, and they have a way of inspiring, empowering, and helping us see our own lives in a context of something greater than the struggles we face at any given moment.

My favorite was Superman. I connected to young Clark Kent as he struggled with feeling “different” resenting his powers, the struggle they brought, and the isolation he felt because of them. But I watched as eventually He embraced them, and they became the catalyst for how he would save the world. I thought that maybe all my “differences” could become the catalyst for me to tell a story in the world that no one else could. Perhaps all the “disorders” could help me see the world in a way that no one else can. Maybe because I struggled I can help those who are, too, thus allowing my “differences” to become superpowers.

RNS: What is a "confessor" and how did it help you to have one in your life?

NC: A confessor is that one person in your life, who you can bring your complete self to without fear. The person you can show the messy and dark parts of who you are, and then to receive only love. For me, it was my mom. No matter how hard life got, how badly I messed up, or how dark my doubts about life, God, or myself were, I could come to her and find grace. Having someone who fully knew me, and all my broken places but still believed in my potential enabled me to believe in myself, giving me the courage and support to keep going, even when I didn’t think I could.

RNS: Is there a Scripture passage that informs how you think about difference?

NC: Reading through the story that is the bible, even from the very first paragraph, it’s hard not to see God as an artist, the entire world points to a master creator who put thought, passion,  and love into his creation, even more amazing is His image on humanity. So just the knowledge that we were designed and bear the image of the creator is life-changing in and of itself-- it implies that the way I am is not an accident, or wrong, but actually a beautiful part of His design, and who I was made to be. The verse I constantly come back to is Psalm 139:13: “For you created my inmost being; you knit me together in my mother's womb.”

RNS: What would you say to kids languishing in their difference, feeling cut off from the world and wondering if they'll ever feel normal?

NC: I wish I could say that there came a day in which I felt “normal,” but so far it hasn’t happened. But there did come a day in which I felt valued. "Normal” is overrated. You weren’t created to be “average” you were created to be uniquely beautiful, to tell a story that no one else could. So while sometimes it’s so hard feeling different, and it can be so lonely looking at life from the outside. But if you keep trusting in the design God has created you in, you’ll find that the way you are is not only beautiful, but needed. You have the ability to change the world, not in spite of your differences but because of them.