(RNS) The ’Splainer (as in “You’ve got some ’splaining to do”) is an occasional feature in which the RNS staff gives you everything you need to know about current events to hold your own at the water cooler.

You thought the holidays were over. Technically, no — not until Jan. 6, when Christians all over the world celebrate Epiphany. In some places, the day is known as “Three Kings Day” after the wise men, or Magi, who, the Bible says, brought the infant gifts and proclaimed him the Son of God. In other places, the day is known for giving gifts, for extremely cold baths and for biting into babies. Let us ’splain …

What do you mean, the holidays are not over?

Maybe you’ve heard of “The Twelve Days of Christmas?” Besides being a catchy or crucifying little ditty, depending on your point of view, the title refers to the period between Christmas Day, when Christians celebrate the birth of Jesus, to Epiphany, when they mark his manifestation — “incarnation,” in some Christian traditions. In fact, the word “epiphany” is drawn from the Greek and means “manifestation.”

The period refers to the story in Matthew that tells of some kings who followed a star in the East to find the baby in the manger. They brought him gifts of gold, frankincense and myrrh. Ten points to you if you can name the kings (Melchior, Caspar and Balthazar) and 10 more points if you know what myrrh is (a scented oil).

But didn’t the wise men visit Jesus on the night of his birth? Like in the church Christmas pageants?

Who knows? The Bible isn’t exactly a timetable. In fact, the Bible says nothing about the number of kings, their robes, turbans or crowns they wear in every Christmas pageant in the world, nor does it say they rode on camels or how they learned the star would lead them to a baby in Bethlehem. People have just filled in all those blanks since Epiphany became a church feast in the second century, making it one of the oldest of Christian celebrations.

How is Epiphany celebrated? 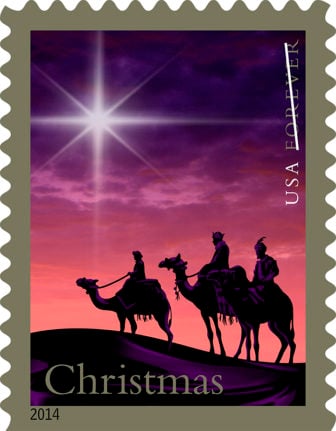 That depends on where you are and what kind of Christian you are. Most U.S. Protestants mark the day on the Sunday closest to Jan. 6 and it is usually limited to that day’s church service and sermon. But it opens the church’s “season of Epiphany,” a time when sermons and lessons focus on the miracles of Jesus;  the season ends on the Sunday before Ash Wednesday (this year on March 1), the start of the Lenten season.

Catholics also celebrate Epiphany on the actual day, and Pope Francis will deliver his annual Epiphany homily during Mass in St. Peter’s Basilica in Rome. The following Sunday, many Catholic priests will deliver homilies that focus on Jesus’ baptism. Eastern Orthodox churches, too, focus heavily on Jesus’ baptism at Epiphany, with priests in places such as Russia, Bulgaria and Greece tossing crucifixes or crosses into the water, which devotees then dive for. Some Orthodox churches, which use a different calendar to mark their liturgical year, celebrate Epiphany on Jan. 19 and won’t take the dive until then.

That sounds bracing. Are there any Epiphany traditions that don’t involve becoming a polar bear?

You bet. First, some Christians give gifts all over again on Jan. 6. In Spain, children leave their shoes outside in the hopes they will be filled with candy and presents if the youngsters have been good. Naughty ones are told they’ll get only clumps of coal.

In Italy, children receive gifts on the Epiphany morning from a witch known as “La Befana.” The story goes that the wise men visited an old woman when they were looking for Jesus and invited her to come along. She was too busy. Then the shepherds stopped at her shack and extended their invitation. “Sorry, too busy!” Since then, she flies through the air in search of the Christ child, leaving gifts for other good children in her search. Meanwhile, Venetian gondoliers mark the day by dressing in drag and cruising down the Grand Canal.

READ: Forget the Magi: Why Italian children await gifts from the good witch

In Spain, Mexico and other Latino countries, Jan. 6 is “Dia de los Tres Reyes Magos,” or Day of the Three Wise Kings. To celebrate, people make a “roscon de reyes,” or king’s ring cake, a pastry with a tiny figurine of a baby baked into the dough. The idea is that the baby will be revealed in a slice or a bite of bread, just as Jesus was revealed as the Son of God to the kings.

Catholics in New Orleans have taken the king cake to a new level. Bakeries all over the city offer elaborate, frosted, fruit-filled confections, all baked with a plastic baby on the inside. Customers eat them throughout the season of Epiphany, indulging right up to Ash Wednesday. Like plastic beads, hurricane glasses and “golden” doubloons tossed from parade floats, king cakes have become an emblem of that city’s Mardi Gras festivities.