(RNS) Cardinal Joseph Tobin was installed as New Jersey’s first Roman Catholic cardinal Friday (Jan. 6) at a solemn Mass in Newark’s Sacred Heart Cathedral during which he declared that the church “is neither an elite club nor static container of truth.”

Instead, Tobin said in his homily, the church “is a set of interlocking and dynamic relationships among people and with the Triune God.” It is the place, he continued, “where believers speak and listen to each other, and it is the community of faith that speaks with and listens to the world.” Archbishop Tobin walks up and down the aisle of the cathedral with the Vatican decree announcing he is the new Archbishop of Newark. Photo courtesy of Aristide Economopoulos via NJ Advance Media

The address was very much in line with Pope Francis’ welcoming and inclusive vision of Catholicism. This was not surprising given that Francis stunned church observers — and Tobin himself — when in October he announced he was elevating Tobin to the rank of cardinal while Tobin was head of the Archdiocese of Indianapolis, which has just 230,000 Catholics and never had a cardinal.

Then in November Francis said he was moving Tobin to head the Archdiocese of Newark, a much larger community of some 1.2 million Catholics but also one that had never been headed by a cardinal. Such honors were always reserved for archbishops in the neighboring cities of New York and Philadelphia.

Tobin’s appointment was in part a solution to the problems that had plagued the Newark archdiocese under now-retired Archbishop John Myers. Myers had a stormy 15-year tenure in which he alienated many with a hard-line approach to doctrine, questionable handling of clergy sex abuse cases, and pricey renovations made to a retirement home.

Morale in the archdiocese was low and an archbishop who Francis had sent in 2013 to take over from Myers had to be transferred to the Archdiocese of St. Paul and Minneapolis to clean up scandals left by the outgoing archbishop there.

But Tobin’s appointment was also viewed as another move by Francis to shake up the U.S. hierarchy and place a churchman in his own mold in a key post between two prelates with reputations as foes of the pope’s more flexible approach to ministry — Philadelphia Archbishop Charles Chaput and New York Cardinal Timothy Dolan.

Tobin — who was effectively exiled to Indianapolis from a Vatican post in 2012 after he criticized Rome’s investigation of the American nuns under former Pope Benedict XVI — has embraced Francis’ pastoral approach and has regularly defended Francis from his conservative critics. 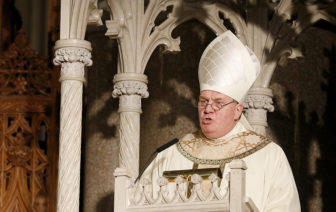 Archbishop Tobin delivers his homily after being installed as the Sixth Archbishop of Newark at the Cathedral Basilica of the Sacred Heart on Jan. 6, 2017, in Newark, NJ. Photo courtesy of Aristide Economopoulos via NJ Advance Media

In his homily on Friday, Tobin continued on that theme, saying the greatest challenge for the church is not one of the “so-called ‘hot-button’ issues that dominate the discourse, both inside and outside the church,” even though he said those topics are “noisy and divisive” and worry him.

Rather, he said it is the widening “chasm between faith and life” — between the faith that Catholics profess and how they live their lives.

To believe in Jesus “is not acceptance of a doctrine or a moral code, but of a person who lives now and is the source of life — and not just on Sunday morning!” he told an overflow crowd that included thousands of worshippers and hundreds of nuns and priests from Newark, Indianapolis and Tobin’s own Redemptorist order.

“The church senses a responsibility for the world, not simply as yet another institutional presence or a benevolent NGO, but as a movement of salt, light and leaven for the world’s transformation,” Tobin said. “For this reason, our kindness must be known to all.”

He said that joy must be the hallmark of the church today as it was for the earliest Christians who lived through much more difficult times.

“Rejoice,” Tobin concluded, “because we will grow in unity and humility and, in the process, discover joy and peace in our life together. Rejoice, because our kindness will be known to all: to the searching young and the forgotten elderly, to the stranger and the voiceless, to the powerful and the cynical.” 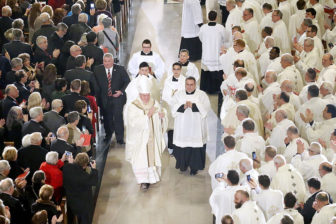 Archbishop Tobin walks back down the isle after being installed as the Sixth Archbishop of Newark at the Cathedral Basilica of the Sacred Heart on Jan. 6, 2017, in Newark, NJ. Photo courtesy of Aristide Economopoulos via NJ Advance Media

Dozens of bishops and several other cardinals also celebrated the Mass, including retired Cardinal Theodore McCarrick, who was archbishop of Newark before he went to Washington where he was given a red hat; Cardinal Donald Wuerl, the current archbishop of Washington; New York’s Dolan; Chicago Cardinal Blase Cupich; Boston Cardinal Sean O’Malley; and Cardinal Roger Mahony, retired archbishop of Los Angeles.

Republican Gov. Chris Christie was among the many civic and political leaders in attendance, and his presence pointed up one of the potential political flashpoints Tobin’s appointment could spark.

While in Indianapolis, Tobin clashed with then-Gov. Mike Pence — now the incoming vice president in the Trump administration — over Pence’s demand that the church stop resettling Syrian refugees.

Tobin refused to back down, saying Pence’s policy was “immoral, capricious and probably illegal,” and he continued to criticize Donald Trump’s proposals to bar refugees and immigrants based on their religion or ethnicity. Bishops file out of the Cathedral Basilica of the Sacred Heart during the end of Mass installing Cardinal Tobin as the Sixth Archbishop of Newark on Jan. 6, 2017, in Newark, NJ. Photo courtesy of Aristide Economopoulos via NJ Advance Media

Christie, a Catholic and vocal Trump ally, has also said New Jersey should not admit any refugees from the Syrian civil war, not even “orphans under age 5.”

“His leadership in Indianapolis, framed by his commitment to welcoming Syrian refugees in the face of political pressure, shows a humanitarian touch much needed in the public debate,” Murphy, also a Catholic, said.

“His stated desire to build bridges, especially in a diocese with an increasing immigrant population, and his call to resist against any efforts for mass deportations is especially welcome.”