ROME (RNS) More than 500 years after the Jews were expelled from Sicily, a tiny Jewish community will open its first synagogue in the island’s capital city of Palermo.

At an official ceremony to be held on Thursday (Jan. 12), the Catholic Archdiocese of Palermo will transfer to the Jewish community a chapel, the Oratory of Santa Maria al Sabato, which was built above the ruins of the Great Synagogue that once stood in the center of Palermo.

The Sicilian Institute of Jewish Studies and a Jerusalem-based organization, Shavei Israel, requested the transfer. It will formally take place on the anniversary of the decree that demanded the expulsion of Jews from Sicily during the Spanish Inquisition: Jan. 12, 1493. Sicily, at the time, was ruled directly by the kings of Spain via governors and viceroys. 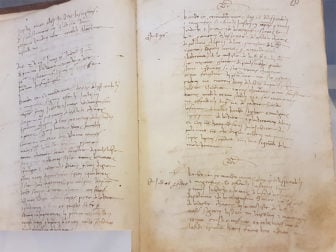 The original Expulsion Edict of 1493 from the king and queen of Spain, written in Sicilian. The decree demanded the expulsion of Jews from Sicily during the Spanish Inquisition. Photo courtesy of Shavei Israel

The archbishop of Palermo, Corrado Lorefice, described the initiative as a “gesture of hope” designed to build dialogue between Catholics and Jews.

“It is with great joy that we have responded to this request to have a place of study and worship for the Palermo Jewish community,” said Lorefice in a statement.

“This transfer is the product of a genuine friendship and ongoing dialogue between the church and Palermo’s Jewish community.”

Noemi Di Segni, president of the Union of Italian Jewish Communities, said: “It is a gesture that will recover centuries of history.”

Shavei Israel, which is committed to rebuilding Jewish communities around the world and reinforcing their links with Israel, said the Palermo synagogue would revitalize the local community.

“Ever since I learned about Sicily’s history, my goal has been to lay the groundwork for the establishment of the first Jewish community in Palermo in more than five centuries,” said Michael Freund, founder and chairman of Shavei Israel. “This is something that would have been unthinkable 50 or 100 years ago.

“I am grateful to the archbishop of Palermo for having the vision and courage to make such a grand gesture of reconciliation.”

The synagogue, which will include a study center (Beit Midrash) and a Jewish heritage center, will be operated primarily by Shavei Israel and overseen by Rabbi Pinhas Punturello, the former chief rabbi of Naples.

“It is a miracle that after more than 500 years there are still people in Sicily who proudly cling to their Jewish roots and it is testimony to the fact that neither the expulsion nor the Inquisition was able to extinguish the eternal Jewish spark in their hearts,” said Freund.

Jews have had a presence in Sicily for more than 1,400 years and some scholars believe they were brought to the island as slaves after the capture of Jerusalem in the first century.

They suffered forced conversions and systematic persecution over the centuries, culminating in the decree issued in 1493 by King Ferdinand and Queen Isabella of Spain.

Shavei Israel says it’s been working with a number of Sicilians descended from Iberians whose forefathers were forced to convert to Catholicism in the 14th and 15th centuries yet preserved Jewish traditions and are now rediscovering their roots.