(RNS) “Will our parish leaders petition Cardinal Tobin to lift the suspension of Rev. Hall? This parishioner requests it.”

That comment was posted on my Twitter feed on Jan. 6, the day that Cardinal Joseph Tobin was formally installed as the new archbishop of Newark, where I have served as a Catholic priest for 27 years.

The Rev. John J. Myers in 2008 as archbishop of Newark. Photo courtesy of John O’Boyle/The Star-Ledger

That was also the day that Archbishop John Myers, who had suspended me from priestly ministry for refusing to hide my identity as a gay man and for refusing to stop supporting others in the LGBT community, would be officially and completely retired.

I was very humbled and full of gratitude for the tweet from the parishioner, a member of Sts. Peter and Paul Church in Hoboken, N.J., where I had been serving until my suspension last Aug. 31. I had seen a few other postings expressing a similar sentiment since the announcement that Tobin would replace Myers, and I had been contacted by family members and friends asking the same question.

It has now been a year and a half since this whole saga began, when Archbishop Myers removed me from my job as chaplain at Seton Hall University in May 2015. He did this due to suspicions that a “NOH8” posting I made on Facebook standing against attacks on the LGBT community, plus my subsequent coming out as a gay man, reflected a “hidden agenda” that he claimed undermined Catholic teaching.

It has also been five months since Myers suspended me from all priestly ministry for my “disobedience” in continuing to be involved with that same work against LGBT discrimination.

That’s given me a lot of time to think about what would happen when a new archbishop came to Newark, and what my future would be.

But as I was contemplating it all the decision was effectively made for me, on Dec. 7. That’s when the Vatican issued a document reaffirming a 2005 instruction that gay men should not be admitted to the priesthood. Apparently, Pope Francis approved of the policy.

How he could assert this is as confusing as his famous “Who am I to judge?” comment when asked about gay men in the priesthood.

One of the reasons for the ban, per the latest document, is that “gay men find themselves in a situation that gravely hinders them from relating correctly to men and women.”

I’m thinking I would like to go back to all the men and women who I’ve had the privilege to minister with and to over my 27 years of priestly service to ask if I was hindered in relating to them.

Apparently, the parishioner cited above would not think so. We should keep in mind that the original 2005 teaching came out at a time when gay priests were made scapegoats for the clergy sexual abuse crisis. Since then science and mental health studies have proved that very few acts of pedophilia in general are committed by gay men.

The activity for which I was suspended last August was related to my speaking publicly to LGBT Catholics and encouraging them to stay in the Catholic Church. Yes, I said stay IN the church!

And yes, I met with groups that do not necessarily agree with our teaching. But those are the places Jesus went. I believe that today is comparable to many other times in the church’s history when the tenets of its teachings came face to face with developments in society, and things became “messy.”

Look at the Council of Jerusalem in the first century, when the debate was whether you had to convert to Judaism prior to becoming a Christian (you didn’t, they decided). Or when church authorities argued whether Catholics could marry non-Catholics. (They can, but to this day a Catholic who wants to marry a non-Catholic must request a “dispensation”!) 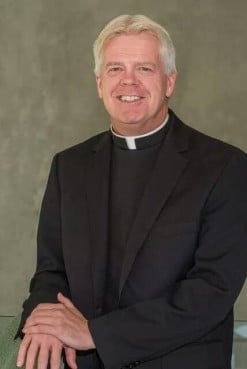 In May 2015, the Rev. Warren Hall was abruptly dismissed from his position as the popular campus chaplain at Seton Hall University in New Jersey because the Catholic archbishop of Newark said his advocacy against anti-gay bullying, and his identity as a gay man, undermined church teaching. Photo courtesy of Warren Hall

Is the language in the church’s teachings referring to same-sex attraction as “objectively disordered” and same-sex relations as an “intrinsic moral evil” offensive? I believe it is. Theologians will posit that these descriptors reference behavior and not the person but either way it’s still offensive.

So too was the language of the Good Friday Liturgy when it referred to the “perfidious Jews.” Pope John XXIII determined that the language was offensive to our Jewish brothers and sisters and he did not just change it but completely removed it from the Catholic lexicon.

Will the day come when “disordered” and “evil” referring to LGBT people are changed or, better, removed from Catholic teaching? I believe it will. But today is not that day. Therefore, until that day arrives, we have to keep discussing, debating and perhaps even being “disobedient.”

So, will I seek reinstatement as a priest in good standing?

I can’t, simply because I could not in good conscience take the Oath of Fidelity that all priests take upon ordination and when assuming a pastorate, namely, that I “accept and hold everything that is proposed by the hierarchy” and that I “adhere with religious submission of will and intellect to the teachings.”

I’m not talking about the matters of faith but matters of discipline. I’m sure pretty much all Catholics pick and choose what teachings to follow, and in a sense that’s what I’ll be doing when it comes to the church’s views on gay men and women.

But that teaching is hardly the most important one. I think the average Catholic wants the church to get back to the basics: feeding the hungry; clothing the naked; proclaiming the message of love, forgiveness and inclusion that Jesus taught his followers.

It’s a message the people are not hearing enough, and because of that their church is failing them and because of that many are abandoning their church, in droves! As bishops sit on their thrones the view has to be disturbing. What Cardinal Tobin saw from the altar at his new cathedral in Newark was a gathering of the faithful hoping for a kinder, gentler and more pastoral shepherd — and from all accounts they got one.

Yet as open as he is, I don’t believe the new archbishop can even make an offer to reinstate me. If he did it would be tantamount to a cardinal defying his own church’s teaching.

So I’ll continue to be Catholic, albeit the “pick-and-choose” kind, because I still love and have hope for my church. I have found a wonderful parish with terrific ministries, including one especially for its LGBT parishioners — I now count myself one of them.

At this point I consider myself a “former priest” and will just move on with life as a lay person. There will probably be some paperwork so the diocese is no longer legally responsible for me. But I don’t see any reason to bother with formal laicization.

I will work now in the secular world with that same sense of mission that was mine since I was a youth group teen and which I committed myself to on the day of my ordination.

In doing so, I’ll continue to live by the final command of the liturgy that we all celebrate: “Go in peace, glorifying the Lord by your life.”