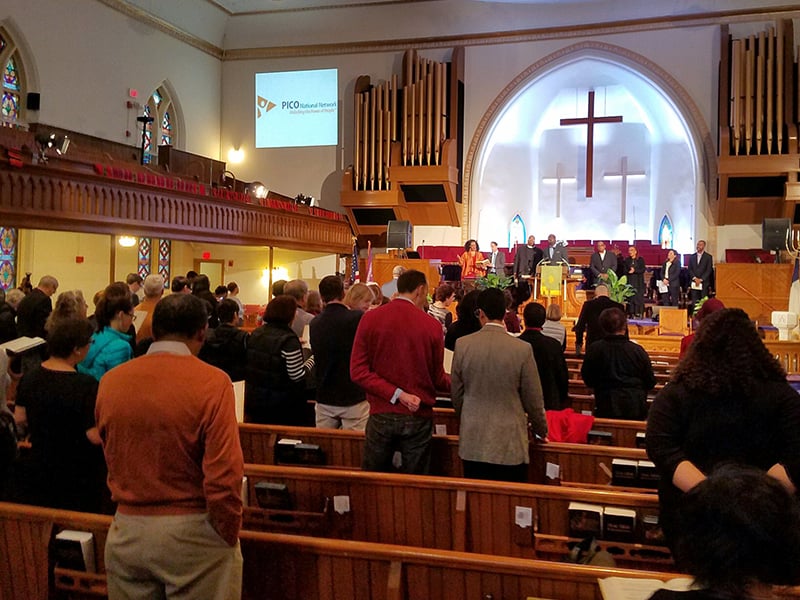 WASHINGTON (RNS) As crowds neared the Capitol for the swearing-in of President Donald Trump on Friday (Jan. 20), two churches within miles of the National Mall did more than watch: one strategized, the other served.

At Metropolitan African Methodist Church, a dozen groups gathered to pray and devise a plan for advancing its goals of justice for women, immigrants and religious and sexual minorities during an administration that is expected to present serious challenges to those groups.

Christian and Jewish leaders at the prayer service offered both fighting words and calls for unity at a gathering of black and white, young and old.

“We’re coming together because we are extending an invitation,” said Bishop Dwayne Royster, political director of PICO National Network, “to get engaged in your local community to do the work of resistance and opposition necessary so that we can really bring about a country that is not great but instead a beloved community.”

The Rev. William Lamar IV, senior pastor of Metropolitan African Methodist Episcopal Church in Washington, D.C., sings “Lift Every Voice and Sing” during The People’s Prayer Service held at his church on Jan. 20, 2017. To his right is Bishop Dwayne Royster of PICO National Network. RNS photo by Adelle M. Banks

Leaders sing “We Shall Overcome” at the end of The People’s Prayer Service at Metropolitan African Methodist Episcopal Church in Washington, D.C., on Jan. 20, 2017. RNS photo by Adelle M. Banks

The Rev. Jennifer Lathrop, a hospice chaplain from the San Francisco area, on Jan. 20, 2017. RNS photo by Adelle M. Banks

Speakers said the church service, bookended by the hymns “Lift Every Voice and Sing” and “We Shall Overcome," was for people of faith and no faith to learn from past lessons and seek solidarity to counter the new administration when necessary.

“Help us to do deep interrogation of the things we have believed that led to this moment,” prayed Lisa Sharon Harper, chief church engagement officer of Sojourners. “And so, God, I pray that you will give us strength, strength to resist.”

Participants took notes in their program as Royster ticked off the websites of progressive organizations that planned to challenge the new administration: Sojourners, Religious Action Center for Reform Judaism, the United Church of Christ.

Some already have vowed to stand with people who fear they will be marginalized by Trump and the new Congress. They include Washington rabbis like Rabbi Aaron Alexander of Adas Israel Congregation, a Conservative synagogue, who talked after the prayer service while an organist continued to play “My Redeemer Lives.”

“When deportations begin, we will create sanctuary. If there’s a registry, we will be the first ones in line,” he said of the Muslim registries that Trump has proposed. “We will register as Muslims.”

Seven blocks away, New York Avenue Presbyterian Church opened its doors — and its bathrooms — to inauguration spectators as a big screen in the same room where it hosts homeless people for Sunday breakfast showed the transition of power taking place on the Capitol steps.

The Rev. Jennifer Lathrop, a hospice chaplain from the San Francisco area, stepped out of the nearby chapel, where she had prayed for “the things that endure” on the historic day: hope, strength, wisdom.

“We were just going to go upstairs to the church to see if we could move away from the inaugural speech,” said Lathrop, who was traveling with her daughters for the Women’s March on Washington the next day. She had stopped to see the historic church where President Abraham Lincoln had a designated pew.

Merlene Debas, on the other hand, sat with a couple of dozen people in front of the screen, listening to the speeches and the closing prayers, and wearing her red “Make America Great Again” cap.

“I’m happy to be here,” the Haitian native and Mormon said of her seat at the church, which she learned was an option after she ran into a barricade that kept her from the Mall. “We pray and God shows up.”

Though the gathered watchers didn’t applaud the speech, Debas, a nurse was happy with the outcome and said, just before Franklin Graham prayed, that she expects Trump will improve on Obamacare.

Volunteer Barry Tindall said the church open house this time was more low-key than eight years earlier when it hosted visitors escaping much colder weather while marking the historic inauguration of the first African-American president.

“You didn’t hear any hooping and hollering during the speech” on Friday, said Tindall. He pointed to the contrast between the people nearby who snacked on cookies the church provided with the crowd on the Mall that they watched on TV. “But there were a lot of people cheering and we respect that as well.”