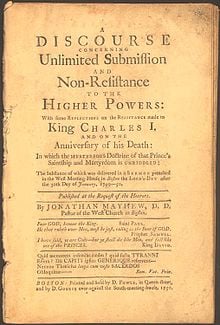 In 1750, a Boston minister named Jonathan Mayhew made his name by preaching that when the Apostle Paul wrote that the powers that be are to be obeyed and honored because they are “ordained of God,” he didn’t mean all the powers that be.

According to Mayhew, Paul’s injunction in Romans 13:1-7 refers to righteous civil authorities but not to unrighteous ones. It “no more proves it to be a sin to resist such rulers, than it does, to resist the devil,” he said.

Published in London as well as in Boston, his Discourse concerning Unlimited Submission and Non-Resistance to the Higher Power was a best seller, and later was considered to be the first volley of the American Revolution.

It seems relevant for Americans again.

Amidst President Trump’s anti-immigrant campaign, including his signing of an executive order to cut federal funding from sanctuary cities, a good case can be made that this particular civil authority is unrighteous. Obedience to the Trump Administration will soon become problematic for any number of individuals and institutions, secular and religious.

Besides civil disobedience, what about the obligation to honor the powers that be by, for example, offering up prayers on their behalf?

“You should pray for Donald Trump no matter how you voted” ran the Washington Post‘s headline on an Inauguration Day op-ed by Russell Moore, the foremost non-supporter of Trump in American evangelicalism.

Consistently, no matter who is in office, we are to pray for success. That doesn’t mean we pray for all of any leader’s ideas to be realized. But it means that we pray that he or she would succeed, would carry out an agenda that leads to the flourishing of the rest of society and, particularly, so that the church may “lead a peaceful and quiet life, godly and dignified in every way.”

And, alluding to Romans 13, Moore went on to say, “The biblical command to render honor also means we cannot in good conscience undermine the legitimacy of our new president.”

That’s all a bit too Pauline for my taste.

The new president has made it abundantly clear what his agenda is, and from the environment and health care to minority rights and the rule of law, it’s a disaster in the making. Not to mention that he is undermining his legitimacy himself by his mendacity, vulgarity, and contempt for ethics.

Thankfully, Romans 13 has no authority in the Jewish tradition.

To be sure, we Jews have been offering regular prayers for government leaders since the Middle Ages. But we also have a rich tradition of complaining to, arguing with, and assailing the powers that be — up to and including the highest one of all.

Consider Psalm 44, a reproachful prayer that asks, “Awake, why sleepest thou, O Lord? arise, cast us not off for ever. Wherefore hidest thou thy face, and forgettest our affliction and our oppression?”

Shmuly Yanklowitz, an Orthodox rabbi in Phoenix active in liberal causes, has taken this tradition to heart, replacing the traditional prayer for rulers in order to ask God to avert the evil decrees that appear to be upon us.

Guide the incoming leader of this country away from his basest instincts, thwart his plans to target certain groups and strengthen white supremacy; for You know, God, that all were created in Your image.

We pray that the decrees from the Executive office do not harm the innocent. We pray that any policies that are meant to harm the vulnerable in prioritization of the powerful and privileged will be quashed. Should there be plans that will merely benefit the most privileged Americans, but not all of humankind and the planet we call home, may they fail. May our nation not consort or conspire with totalitarian despots but reaffirm our commitment to freedom and democracy. Grant us the strength to demonstrate spiritual resistance, to imbue our sinews with the highest integrity. Give us the wisdom and courage to do what’s right to protect the most powerless and defenseless in society.

Yanklowitz’s prayer has caused a kerfuffle in Orthodox circles. Shmuley Boteach, the celebrity rabbi who ran unsuccessfully for Congress as a Republican in 2012, tweeted out, “A rabbi rewriting a prayer to attack the POTUS? There is no room for politics in religion, only values.”

Boteach might recall that once upon a time the prophet Amos came down from his sheepfold to declare God’s judgment against Jeroboam and his kingdom: “Hear this, O ye that swallow up the needy, even to make the poor of the land to fail.”

Praying that the civil authorities not harm the innocent is hardly without precedent in the Judeo-Christian tradition.