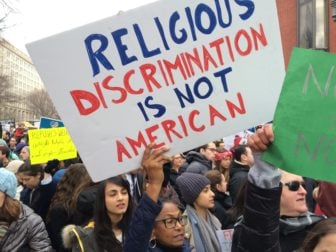 (RNS) On Sunday, North Country Public Radio’s Brian Mann was in a corner of the Adirondacks, talking with Bill Jackson and his brother Tim about President Trump’s executive order temporarily banning immigrants from seven Muslim countries.

Bill Jackson was totally down with it.

“I feel that if a Muslim woman wants to move into this country, she needs to leave her towel home. Because the reason this country is here and safe today is because of Jesus Christ,” he said. “We were one nation under God. The Muslims are into Allah.”

“What about the idea of religious liberty, that this is a nation where you can worship whatever God you want?” asked Mann.

“That is something I believe that has come along with political correctness and all this other garbage,” Bill replied.

Well sure, as long as we’re talking about late-18th-century political correctness.

“Be it enacted by the General Assembly [of Virginia],” Thomas Jefferson wrote in 1777, “that all men shall be free to profess, and by argument to maintain, their opinions in matters of Religion, and that the same shall in no wise diminish, enlarge or affect their civil capacities.”

A just government “will be best supported by protecting every Citizen in the enjoyment of his Religion with the same equal hand which protects his person and his property,” James Madison wrote in 1785, opposing a bill in the Virginia legislature to pay clergy out of state funds.

Such an establishment, Madison declared, “is a departure from that generous policy, which, offering an Asylum to the persecuted and oppressed of every Nation and Religion, promised a lustre to our country, and an accession to the number of its citizens.”

What followed, in 1787, was a Constitution for the new American republic that foreswore anything like the English test acts barring Catholics and nonconformists from public office.

Instead, with little debate, the framers decided that “no religious test shall ever be required as a qualification to any office or public trust under the United States.”

To be sure, not every framer was down with that.

Luther Martin, the anti-federalist attorney general of Maryland, reported to his state legislature that “there were some members so unfashionable as to think that a belief of the existence of a Deity, and of a state of future rewards and punishments, would be some security for the good conduct of our rulers, and that, in a Christian country, it would be at least decent to hold out some distinction between the professors of Christianity and downright infidelity or paganism.”

A couple of years later, after the Bill Rights provided that “Congress shall make no law respecting an establishment of religion, or prohibiting the free exercise thereof,” he wrote a letter to the Jewish community in Newport, Rhode Island, stating his understanding of the country’s religious regime.

The Citizens of the United States of America have a right to applaud themselves for having given to mankind examples of an enlarged and liberal policy: a policy worthy of imitation. All possess alike liberty of conscience and immunities of citizenship. It is now no more that toleration is spoken of, as if it was by the indulgence of one class of people, that another enjoyed the exercise of their inherent natural rights. For happily the Government of the United States, which gives to bigotry no sanction, to persecution no assistance requires only that they who live under its protection should demean themselves as good citizens, in giving it on all occasions their effectual support.

It must be admitted that Martin’s unfashionable wish to make invidious religious distinctions has from time to time prevailed, both in legislation and in popular outbursts.

When the Know-Nothings briefly gained power in 1850s, anti-Catholic laws were put on the books in a number of states. Anti-Mormonism took legal as well violent extra-legal form.

For the most part, however, U.S. presidents have pushed back against expressions of religious bigotry. When Gen. Ulysses Grant banned Jews from his military district in 1862, President Lincoln insisted that he revoke his order.

Now, however, we have a president who seeks to have religious bigotry codified. As his sometime advisor Rudy Giuliani told Fox News, Donald Trump asked him to find a legal way to put a “Muslim ban” into effect.

As with actions against Catholics, Mormons, and Jews in the past, the excuse is that these people pose a danger to American society.

Jefferson, Madison, Washington, and Lincoln are turning over in their graves.