(RNS) Religious organizations and leaders were swift to react to new Trump administration policies that will widely expand deportations of undocumented immigrants.

“These policies are destructive to families,” said Bishop Dwayne Royster, political director of the PICO National Network, an interfaith organization that provides services to immigrants. “The president, with malicious intent, is attempting to destabilize our nation and communities by breaking up families through deportation and detention.”

The policies, laid out in a memorandum released Tuesday (Feb. 21) by the Department of Homeland Security, are the result of an executive order signed by President Trump on Jan. 25. They will expand Obama-era laws to allow “expedited removals” of any undocumented immigrant who has been in the U.S. for less than two years anywhere within the U.S.

The Obama administration’s policy had been limited to two weeks and within 100 miles of a U.S. border.

Under President Obama, expedited removals — detention and deportation without an appearance before a judge — were limited to those convicted of serious criminal offenses. The new policy also allows expedited removals of any undocumented immigrant who has committed “any criminal offense.” It does not specify if that includes minor offenses such as traffic violations and jaywalking, nor does the new policy require a conviction for deportation.

That has some religious leaders active in the immigrant community very worried.

“From the way it is written, that could be any infraction,” said the Rev. Jon Pedigo, a Catholic priest in San Jose, Calif., who runs the local diocese’s social ministry programs. “We are really, really, deeply — I don’t know another word besides deeply — fearful and we are expecting the worst.”

Some organizations lauded the new policies, though. “Trump promised to take strong action against illegal immigration, and he is,” conservative activists John and Andy Schlafly, sons of the late Phyllis Schlafly, said in a statement. “We applaud these significant steps forward by the Trump Administration.”

Phyllis Schlafly, who died in 2016, founded the Eagle Forum and was a leader in the anti-abortion movement.

“What we are hearing from some of our immigrant members is this is violent,” he said, referring to the new policy. “They are being terrorized; they are being persecuted. The feeling is it is this administration and these policies that are criminal.”

A state-by-state breakdown by the Public Religion Research Institute found that only a minority of Americans favor mass deportations, even in states won by Trump in the 2016 election.

The Rev. Daniel Schultz, pastor of a rural Wisconsin United Church of Christ congregation that runs a food pantry serving immigrants, said the new policy is unclear on whether so-called sensitive locations such as schools and churches can be targeted.

“Are we going to have to worry about ICE agents swooping down on our clients on distribution day?” he said. “What if my congregation chose to offer sanctuary to an immigrant facing deportation? Would we have to worry about immigration officers and sheriff’s deputies kicking down our front door?”

Bishop Mark Beckwith, who heads the Episcopal Diocese of Newark in New Jersey, says at least 10 of the 100 congregations in his diocese have parishioners who are affected by the new policies. He described a heightened sense of urgency as his diocese investigates what its collective response should be.

“What is so upsetting about this is we don’t know what a safe space is,” he said, citing uncertainty about whether the traditional status of churches as sanctuaries will be respected. “We need to move as fast as these executive orders are moving. That’s the challenge. We are grounded in our biblical faith and we need to respond.”

Rabbi Jordan Ottenstein, whose Reform synagogue in Fort Worth, Texas, encounters undocumented immigrants through several interfaith programs, said the new policies put him in mind of the Jewish poet Emma Lazarus, who composed the words at the base of the Statue of Liberty: “Give me your tired, your poor.”

“She was keenly aware of the text in our tradition that reminds us we know what it is to be strangers, for we were strangers in the land of Egypt,” he said. “We need to live that way and we need to act that way rather than showing these people the door.”

Royster of the PICO Network said he has had one question running through his head since he read the new policies.

“I keep asking, where are God’s borders?” he said. “If Jesus was a Mexican, would Donald Trump deport him?” 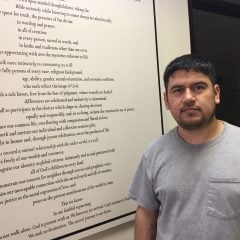 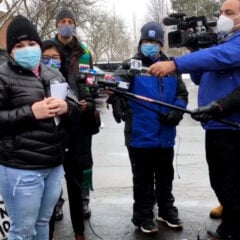