(RNS) On Saturday (Feb. 25) the Conservative Political Action Conference meeting in Washington will host a panel called “If Heaven Has a Gate, a Wall and Extreme Vetting, Why Can’t America?”

Maybe the title is meant to be taken no more seriously than one of those cartoons with St. Peter questioning would-be entrants to the Good Place. But let’s unpack it anyway.

For starters, the metaphor of getting into heaven through a gate comes from the Sermon on the Mount, where Jesus tells his flock (Matthew 7:13-14):

So heaven seems to be for the few. As Jesus goes on to say a few verses (21-22) later, “Not everyone who says to me, ‘Lord, Lord,’ will enter the kingdom of heaven, but only the one who does the will of my Father who is in heaven.”

We’ll get to the business of doing the will of the Father in a moment. What about the extreme vetting part?

Consider the religious persuasions of the three politicians who’ll be sitting on the panel: former congressman and would-be governor of Colorado Bob Beauprez, a Catholic; U.S. Rep. Andy Biggs of Arizona, a Mormon; and U.S. Rep. Ken Buck of Colorado, who calls himself a Christian, i.e., an evangelical.

Catholicism says that we get past St. Peter by working off our sins in purgatory. Mormonism says just about everybody gets into one or another of its three heavens. As for evangelicalism, i.e., Protestantism, it says the things we’ve done, i.e., our “works,” have nothing to do with it.

In other words, church doctrine denies the premise. Heaven does not have extreme vetting.

But OK, Jesus himself suggests what we do in this life is determinative. And according to Matthew 25, he himself is coming back to do the vetting — separating the sheep who will make it into heaven from the goats who won’t according to specific criteria:

34 Then the King will say to those on his right, “Come, you who are blessed by my Father; take your inheritance, the kingdom prepared for you since the creation of the world. 35 For I was hungry and you gave me something to eat, I was thirsty and you gave me something to drink, I was a stranger and you invited me in, 36 I needed clothes and you clothed me, I was sick and you looked after me, I was in prison and you came to visit me.”

In other words, if getting into heaven is the benchmark for America’s immigration and refugee policy, the vetting we should worry about has to do with us, not them; with what we’re doing — or not doing — for the least of these.

Which suggests a different name for the CPAC panel: “If Heaven Has a Gate, a Wall and Extreme Vetting, Why America Can’t Get In.” 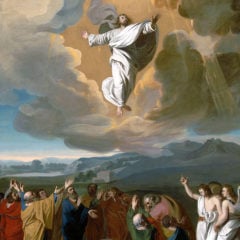 Signs of the Times
Who would you choose, Jesus or the Spirit?