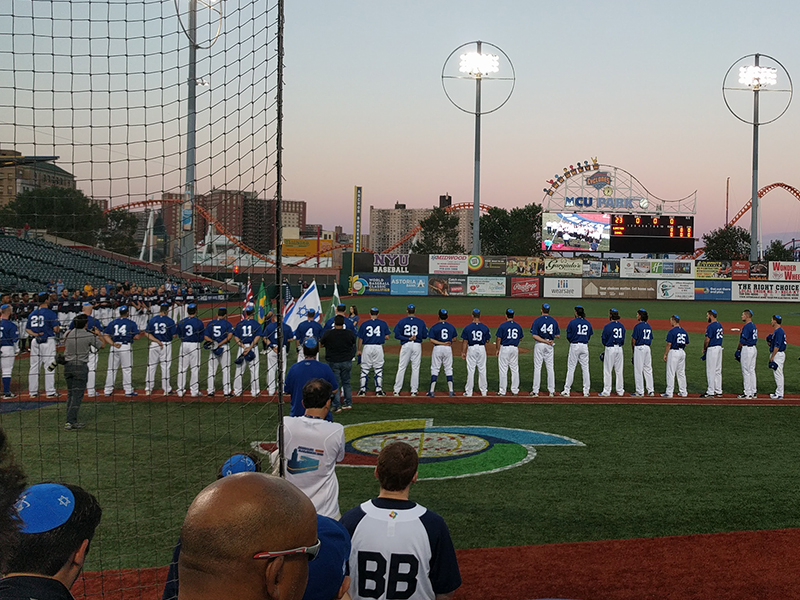 Team Israel members wear their yarmulkes during "Hatikvah," the national anthem of Israel, before a game against Great Britain on September 22, 2016. Photo courtesy of Creative Commons
March 13, 2017
Yonat Shimron

JERUSALEM (RNS) In a soccer-crazed country like Israel, the unlikely success of an Israeli baseball team at the World Baseball Classic hasn’t attracted much local attention.

And it has helped mend ties between Israel and American Jews that have been flagging recently due to backtracking of a government-funded egalitarian prayer space at the Western Wall and a new law that forbids entry to foreign nationals who call for economic, cultural or academic boycotts of either Israel or the settlements.

"I often disagree with my Israel-based relatives over Israel's policies vis-a-vis the Palestinians, but we've all been rooting for Team Israel and it's been a great way to bond," said Benjamin Levy, a California-based college student. "The team exists because Israelis and Americans are working together, and that's an important model for other spheres."

Danielle Barta, Jerusalem director of the Israel Association of Baseball, said the players have become role models. “They’re proud to be Jewish and to support Israel, and they’re also great ball players,” she said.

The IAB helped recruit the team’s players; all but one of them are U.S.-born minor leaguers or former major leaguers with Jewish ancestry. According to WBC’s rules, players can join a team if they would be eligible for citizenship.

Members of Team Israel, created to compete in the WBC tournament, wear blue and white uniforms, the state colors of Israel, and Stars of David on their sleeves.

Their 5-foot-tall stuffed mascot, Mensch on A Bench, wears a black hat and a Jewish prayer shawl. During the holiday of Purim last weekend (March 11-12), the players prayed together in the dugout in South Korea.

Last week the team, which ranked 41st before the start of the competition, made it to the WBC’s second round after winning four games in a row.

Soccer and basketball dominate in Israel, where baseball is a virtually unknown sport. But there is growing interest in the sport, thanks in part to the team’s success.

At a festive gathering of Team Israel supporters in the alcohol-free room of a Jerusalem sports bar, dozens of adults and children watched their team lose to the Netherlands 12-2 on Monday in Tokyo. But that didn’t dampen their enthusiasm.

“I love baseball, and seeing the team get this far gives me hope that I can play for them in a few years,” said 13-year-old Akiva Moss, one of the 800 children who plays on an IAB youth team.

"I love the Mensch on the Bench and the fact that they’re proud of being Jewish," he added. "I am, too."

September 3, 2020
Related Posts
By Emily McFarlan Miller
Meet the Catholic sister nominated for an ESPY Award for her wicked curveball
By Bobby Ross Jr.
He’s a major-league pitcher — and a plumber — whose faith helps keep him focused
By Lauren Markoe
What baseball can learn from religion
By Jerry Pattengale
'Purpose over politics' at the National Prayer Breakfast
By Bobby Ross Jr.
Faith helped baseball coach Tony Beasley beat cancer