(RNS) Sebastian Gorka, President Trump’s top counterterrorism adviser, is reportedly a member of a Hungarian far-right group that is listed by the U.S. State Department as having been “under the direction of the Nazi Government of Germany” during World War II.

The elite order, known as the Vitézi Rend, was established by Admiral Miklos Horthy, a staunch Hungarian nationalist. He was a self-confessed anti-Semite and Nazi collaborator, who deported hundreds of thousands of Jews into Nazi hands.

Last month, journalists noticed that Gorka has worn a medal affiliated with the group on multiple occasions, and that he has further ties to anti-Semitic groups in Hungary. Gorka said he wears the medal as a tribute to his father.

Three Democratic senators have called for an investigation into whether Gorka, who was born in the United Kingdom, “falsified his naturalization application or otherwise illegally procured his citizenship” by failing to disclose his membership in the banned Hungarian group.

Let’s face the historical facts. There has never been any kind of European nationalist movement, especially in central or Eastern Europe, that has been good for the Jews.

Because those groups always define themselves over and against the Jews. The Jews are what they are not. In fact, European nationalists crafted their nationalisms as a deliberately binary way of saying that the Jews are not us.

Now, what do Jewish groups think of Gorka?

As Noah Kulwin reports, those reactions fall pretty much along political lines.

Take centrist and left-leaning Jewish organizations — like J Street, the Anti-Defamation League, and the Anne Frank Center. They have criticized Gorka’s reported links to Vitezi Rend.

What about right-wing groups? The Zionist Organization of America released a statement saying “Gorka is a friend of Jews/Israel.”

The Orthodox Union? For the time being, undecided.

But, in the words of Allen Fagin, its executive vice president: “There are serious people within the community that I’m aware of who have said very, very positive things about Dr. Gorka.”

So, this is what you are wondering.

“Jeff, are you saying that the groups that we would assume to be most defensive of Jewish interests are the most supportive of this man with links to Hungarian fascism?”

So it would seem.

But, wasn’t it people like these right wing ant-Semitic nationalists that made Israel necessary in the first place?

Because here’s the real mind scrambler: You can actually love Israel but be totally meh on the Jews.

How is that possible?

It all depends on what you think Israel represents.

Nationalism. Let’s say that you support Israel because you are a nationalist — and you don’t really care which nationalism it happens to be. Hungarian, Czech, Albanian, an imagined American nationalism — whatever. In that case, you’ll admire Israel, because Israel represents Jewish nationalism.

Militarism. Let’s say that you admire states that embody strong defense. Since Israel has done admirably well (albeit by necessity) in this regard, you would be likely to admire Israel.

Anti-Muslim or anti-Arab sentiment. Let’s say that you hate Islam, Muslims, and/or “Ay-rabs.” You assume that Israel embodies your bouquet of bigotries. In that case, you would be likely to support Israel.

Pro-American. This is real simple. You love America; Israel is one of America’s closest allies — ergo, you love Israel.

Several years ago, in the wake of Israel’s incursion into Lebanon in order to fight Hezbollah, a gentile man in the Deep South, overhearing that I had recently visited Israel, shook my hand and said: “I just want to thank your people for fighting that war for us.”

He wasn’t wrong; Israel’s battle against militant Islamic extremism is, in fact, the first front in that sordid ideology’s war against Western values. But, Israel’s status as a Jewish state was actually irrelevant to this man.

Yes, Israel needs all the friends it can get. Support for Israel cannot become a restricted ideological country club.

But, let’s differentiate “pro-Israelism” from Zionism.

“Pro-Israelism” treats the Jewish state as a football team. We sit in the bleachers and yell: “Hit ’em again — harder, harder.”

Zionism is something else altogether. Whatever else it is, Zionism is also about the moral excellence of the Jewish people.

Let’s play that traditional Jewish game — “what about the kinder (children)?”

Let’s not mess around with this. If young Jews perceive that, say, Gorka, is the kind of person that we snuggle up to, simply because they like Israel, the disconnect will be ferocious.

If Gorka is actually sympathetic to Hungarian fascist nationalism, his ideology is uncomfortably close to alt-right thinking and Breitbart-ism.

How well he fits in with the emerging ideology of the White House.

And how depressing that is. 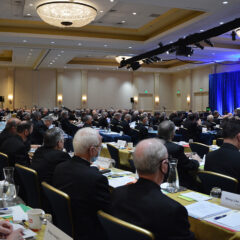 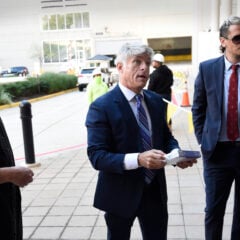 News
As Catholic bishops gather, so do protesters on right and left