(RNS) Within 20 years, the number of Muslim babies being born is expected to surpass Christian births — though there will still be more Christians in the world.

Muslims currently account for about 24 percent of the world population, compared with 31 percent for Christians, according to the Pew Research Center.

But a new Pew study found that due to higher fertility rates and a relatively young population, the share of Muslim babies being born is growing. 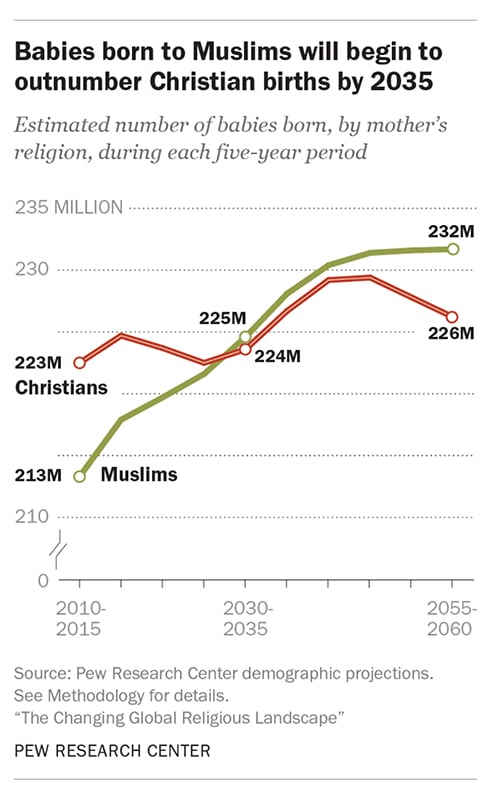 So while 31 percent of all births between 2010 and 2015 were in Muslim families as compared with 33 percent in Christian ones, the proportions are expected to be nearly equal at around 225 million in the early 2030s.

The study projects that two decades later, between 2055 and 2060, around 36 percent of babies will be born to Muslim mothers and 35 percent to Christian women. That will amount to a gap of 6 million babies.

While Christianity is growing in sub-Saharan Africa and other parts of the world, Christians are generally older and are dying at a faster rate than Muslims — particularly in Europe, the study’s authors conclude.

“In Germany alone, for example, there were an estimated 1.4 million more Christian deaths than births between 2010 and 2015, a pattern that is expected to continue across much of Europe in the decades ahead,” the report notes.

But in four decades, 9 percent of babies will be born to the religiously unaffiliated.

The report relied on a database of more than 2,500 censuses, surveys and population registers from around the world.