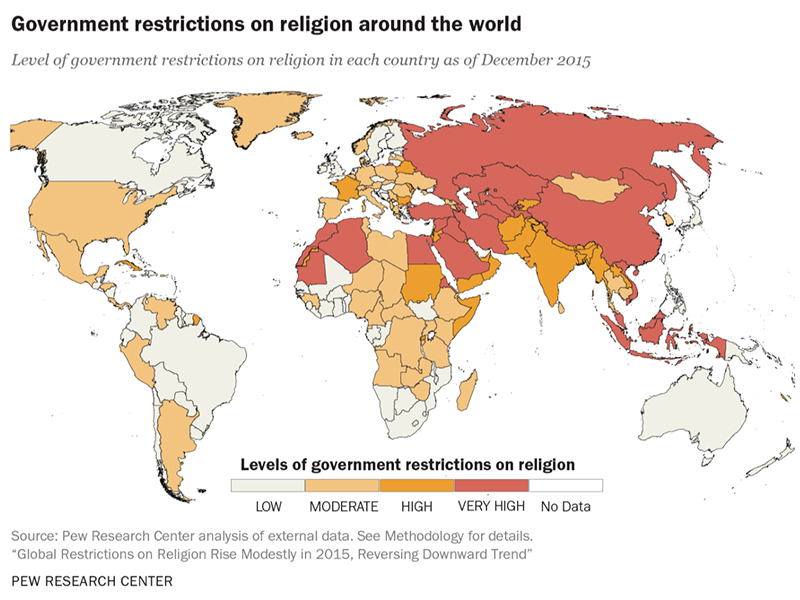 (RNS) The number of countries with "high levels" of restrictions on religion due to government policies or actions of people increased in 2015, reversing a downward trend, according to a new study.

A total of 40 percent of surveyed countries registered "high" or "very high" levels of overall restrictions, according to Pew Research Center’s annual study on global restrictions on religion, released Tuesday (April 11). That's up from 34 percent in 2014, according to the data.

The percentage had declined during the previous two years, tumbling from 43 percent in 2012 to 39 percent in 2013, according to Katayoun Kishi, the primary researcher on the study.

Of the 198 countries Pew surveyed, 25 percent reported "high" or "very high" levels of government restriction, up just slightly from 24 percent in 2014. And 27 percent reported "high" or "very high" numbers of acts of religious hostility by individuals, organizations or groups, a jump from 23 percent in 2014, according to the data.

That happened in a year when European countries welcomed an increasing number of refugees, religion-related terror attacks rocked France and people with albinism were targeted for rituals by witch doctors in sub-Saharan Africa, the report said.

Kishi said it's too soon to tell if the increase is a blip or a trend.

"I think we'd have to wait and see till next year whether or not this trend continues or if this is sort of a one-off just because it is such a modest increase," she said.

Of the five regions surveyed by Pew, the Middle East-North Africa region had the highest percentage of countries registering government harassment or use of force against religious groups: 95 percent.

“Europe sees largest increase in government harassment and use of force against religious groups.” Graphic courtesy of Pew Research Center

Some of those instances in Europe could be linked to the influx of refugees to the region, according to Pew.

The number of people seeking asylum in Europe nearly doubled in 2015, reaching 1.3 million migrants. Of those, more than half were from Syria, Afghanistan and Iraq, where the majority of the populations are Muslim, and Kishi noted some European public officials made the assumption most refugees also were Muslim.

Instances of harassment included derogatory statements such as those by Hungarian Prime Minister Viktor Orban, who wrote in September 2015 that Europe should close its borders to Muslim immigrants in order to "keep Europe Christian." There were also incidents of force, like the German police raid of the Islamic Cultural Center in Bremen, later ruled unlawful.

The uptick came as Europe experienced several religion-related terror attacks, such as the shooting at the offices of Charlie Hebdo and the shootings and bombings at the Bataclan concert hall and across Paris, attacks later claimed by ISIS.

Muslims in France and other European countries faced violence by groups or individuals after those attacks, and the report noted a considerable uptick in social hostilities against Muslims in Europe in general, from 58 percent of European countries experiencing such hostilities to 71 percent, according to Pew. Those numbers rose less significantly for Christians (from 38 percent to 47 percent) and remained high for Jews (71 percent to 73 percent).

Overall, Egypt had the highest levels of government restrictions on religion in 2015, and Nigeria, the most social hostilities toward it.

Pew's eighth study of global restrictions on religion rates 198 countries using two 10-point indexes, the Government Restrictions Index and the Social Hostilities Index. Its primary sources include reports from U.S. government agencies, the United Nations and nongovernmental organizations such as the Anti-Defamation League.