(RNS) “We ask for God’s wisdom as we face the challenge of our very troubled world,” President Trump said in his address to the nation after firing 59 Tomahawk missiles at Syria.

Are we to believe Donald Trump has ever asked for God’s wisdom? More on that in a second.

But first, the reaction from faith leaders to the Syria airstrikes has been underwhelming, but that’s not surprising since public theology has become synonymous with abortion clinic protests in the United States.

Fifty years after Martin Luther King Jr.’s famous speech at the Riverside Church in New York City denouncing militarism, nobody in the United States seems to care or expect our religious leaders to weigh in on matters of war and peace.

The sad state of affairs for religion and public life in the United States doesn’t mean Christian social teaching has nothing to offer the current moment. It just means you’re unlikely to hear about a Christian response on cable news. (You’ll have to make do with Brian Williams calling the bombs “beautiful.”)

The two major streams of Christian engagement on war are pacifism and just war theory, which comes out of Catholic social teaching. The pacifist response to Syria strikes is clearly opposed. As for the just war analysis, it takes a little explaining, but reaches the same conclusion.

Just war theory lists six criteria for waging war. There is certainly a case to be made that Trump’s attack on Syria satisfies three of the criteria.

The use of chemical weapons by Bashar Assad on the town of Khan Sheikhoun, confirmed by the World Health Organization, represents a clear violation of international law.

A limited and targeted military strike to disable Assad’s capabilities appears, from the reports we have in news media, to be a proportional response.

President Obama already tried to use whatever means possible short of force.

Trump bypassed not just Congress, but also European and Middle Eastern allies that joined the United States on similar campaigns in the past.

In the days after the attack, Assad has continued to fly planes from the base we targeted and even attacked the same town. If the goal was to stop Assad’s tyranny, did Trump believe 59 missiles would accomplish the mission?

What’s left of public theology in the United States could debate the previous five points. But any discussion of Trump, Syria and just war theory really should begin and end with just this criterion.

Force may only be used if the intent is to really pursue a just cause such as addressing grave wrongdoing. This excludes giving a humanitarian reason to justify a war while acting on other intentions. We might call this, in the president’s own parlance, FAKE NEWS!

And now we return to the question of Trump and God. The president’s statement on what Rep. Barbara Lee, D-Calif., rightly called an “act of war” included this doozy: “No child of God should ever suffer such horror.” Who is this Donald Trump, benevolent caretaker of foreign children?

Is this the same Donald Trump who sought to bar Syrian refugees from entering the United States? The same Donald Trump who campaigned on an “America first” slogan that was first used to urge the U.S. to stay out of World War II? The same man who heralded the use of pig’s-blood-coated bullets by American soldiers in the Philippines to massacre Muslims? The same man who asked a foreign policy adviser, “If we have [nuclear weapons], why can’t we use them?”?

If you answered “sure, why not, maybe he’s changed” to these rhetorical questions, let me impress on you further.

First, there’s the whole issue concerning the president’s pathological lying. As Glenn Kessler of The Washington Post recently tweeted: “Trump has made 367 false claims in 77 days. On two of three days he did not make false claims, he played golf.” Judging the right intention of our commander in chief would need to begin with our having any capacity at all to believe anything that comes from his mouth.

Second, even the most “cultural” of Christians knows repentance is a big part of the whole God thing. When asked by GOP pollster Frank Luntz if he has ever repented for anything in his life, Trump answered: “I don’t think so. I think if I do something wrong, I think, I just try and make it right. I don’t bring God into that picture.” It’s hard to imagine a God-fearing, God-inspired president who has never done anything in his life worthy of repentance.

When Trump can’t even begin to meet the right-intention criterion, the whole endeavor should be called into question. In a tweet-length statement he might get: Syria attack is “loser” use of force. Sad! 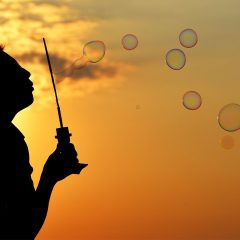