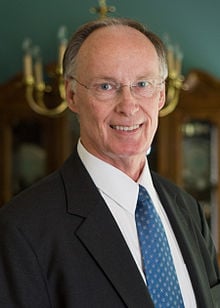 The "irretrievable breakdown" of the marriage resulted from Dianne finding her state-issued iPad filled with electronic billets doux between her 74-year-old husband and his beautiful 40-something aide Rebekah. (The iPad was synced with his state-issued smart phone, oops.)

As an historian, I can say with some confidence that old guys becoming besotted with beautiful younger women antedates same-sex marriage.

Let it be noted that this particular instance featured more than a dollop of hypocrisy on the part of the Southern Baptist deacon and Sunday School teacher known for bringing the Bible into the public policy arena. Oh, and claiming that God had personally elevated him to the Alabama governorship.

As an historian, I can say with some confidence that hypocrisy also antedates same-sex marriage.

Whatever, the circumstances go some way towards explaining why Bentley took the plea bargain and resigned the governorship this week.

It's not that Alabama is unfamiliar with divorce. The state has the seventh-highest divorce rate in the lower forty-eight -- extramarital affairs no doubt being responsible for a lot of that.

But it was just real hard for this paladin of the Alabama Baptist Convention to 'fess up to what he did, such that he broke some ethics and campaign finance laws trying to cover it up.

In another state, like maybe New York, the marriage breaks up but the governorship goes on. Just ask Rudy Giuliani. Or Andrew Cuomo.

The whole affair, reports the New York Times, has been a "bitter blow" to Alabama Christians. Partly because Bentley fell from grace, but even more, it seems, because it took a year and a half to extrude the sinner from the governorship.

Back in the good old days, it seems, he would have been out of there in a New York minute.

"The idea that moral hypocrisy hurts you among evangelical voters is not true, if you’re sound on all of the fundamentals," retired Auburn historian Wayne Flynt told the Times. "At this time, what is fundamental is hating liberals, hating Obama, hating abortion and hating same-sex marriage.”

That's fundamentalism in 21st-century Alabama. I think I prefer the old-time religion.