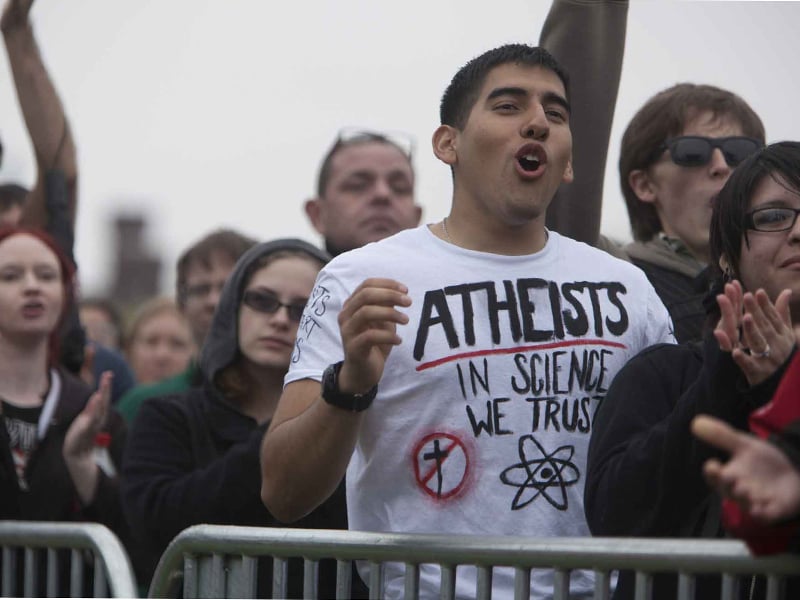 Thousands of atheists and unbelievers, including Alberto Valdez from Del Rio, Texas, gathered in 2012 on the National Mall for the Reason Rally. RNS photo by Tyrone Turner
April 17, 2017
Kimberly Winston

(RNS) A new study shows there may be more than twice as many atheists in the U.S. than previous studies have found.

The report by two University of Kentucky scholars suggests that because people may be embarrassed to admit they don't believe in God, the number of Americans who say they are non-believers may be artificially low. Polls from Gallup, Pew and Barna have reported that number between 3 and 10 percent.

But the real number of American atheists may be as high as 26 percent, according to psychologists Will Gervais and Maxine Najle.

“There’s a lot of atheists in the closet,” Gervais told Vox in an interview. “And ... if they knew there are lots of people just like them out there, that could potentially promote more tolerance.”

Gervais and Najle's work — which will be published in the next issue of the journal Social Psychological and Personality Science — shows that people are less likely to be truthful when answering a direct "yes or no" question about their faith, such as, "Do you believe in God?"

The pair polled two groups of people, asking each how many of several statements were true for them, such as "I am a vegetarian," "I own a dog," and "I believe in God."

“According to our samples, about 1 in 3 atheists in our country don't feel comfortable disclosing their lack of belief,” Najle told Vox.