NASHVILLE, Tenn. (RNS) Kurt Vonnegut believed that Albert Einstein’s general theory of relativity, as an intellectual contribution for the benefit of humanity, could be compellingly paired with another compact formula as radical and revolutionary as any scientific discovery.

Also the product of Jewish thought, it comes from the peasant-artisan Jesus of Nazareth, and it goes like this: “Forgive us our trespasses as we forgive those who trespass against us.”

Hold up, we might think to ourselves. This is dangerous territory. Let us not praise imaginative men by forsaking that bright red line between the sacred and the secular. We’ve had enough of that already, especially now.

When any and all research can be contemptuously waved away with the smear of “political correctness” and every verifiable fact can be beaten back with talk of “media bias,” we’ve got to fight for the right to make certain distinctions. The centuries-old battle is on: We have to protect the sanity of science from the madness of religion. With denialism on the march in Washington, let’s please leave our lonely genius Albert out of it. Why risk tarring him with talk of faith? Einstein delivers us from dogma. He wanted nothing to do with it.

True enough. And were the history of religion the sad tale of countless souls submitting sadly to the reigning dogmas of their times and places, the question would be settled. Einstein was in no way religious. He was, in fact, religion’s opposite. But what if his own witness is a model for thinking these matters through more carefully?

Consider one of Einstein’s most essential sayings: “A foolish faith in authority is the worst enemy of truth.” Consider how hard-won this insight remained throughout his life. Anyone who’s been accused of not being “a team player” can relate. Imagine the young student finding it increasingly difficult to accept as fact the presumed existence of ether as the substance through which starlight travels.

Rejection of received wisdom (or that which passes for wisdom) doesn’t generally go unchecked. Then as now, the pressures of friends, family, and alleged educators often insist that not accepting certain concepts “on authority” is a sign of an intellectual incapacity at best or a willful refusal to get with the program at worst. For those of us who imagine creative nonconformity is essential to the evolution of any and all souls, Einstein goes before us as a kind of saint, the geek boy who lived.

Even the most cursory examination of any sacred tradition reminds us that this is how religion works. The heretic now is the saint later. Father Abraham left behind the rituals of Ur. Siddhartha Gautama fled the pleasure palaces of his upbringing. The Prophet Muhammad said no to the Meccan status quo.

And like every imaginative pioneer of the human barnyard, Einstein refused to accept received knowledge as settled. He was righteously skeptical of that which passed for incontrovertible fact. When he decreed, as he did, that nationalism is an infantile disease (the measles of humankind), it wasn’t a renunciation of every attachment or any and all forms of allegiance. It was the denunciation, then and now, of a death-dealing idol.

As a German who lost his country to fascism, he knew all too well what a murderous misunderstanding of self and others can do to a culture and the globe in which it nests. By his lights, right realization of mystery — the miracle of cosmos and consciousness —serves as a summons to humility and awe in our consideration of other people. The imperatives of neighborliness, Einstein helped us to see, must be taken up globally. While this position isn’t unique to any sacred tradition exclusively, it’s enough to render Einstein an at least occasional prophet within most.

The animating awe we associate with Einstein came from his lifelong consideration of invisible forces. This isn’t to sneak God in by way of metaphysics, but to note, with Einstein, that so much — maybe most — of what’s out there remains invisible to us on the human scale. The poet Emily Dickinson made a similar observation when she said that what we call supernatural is, in one sense, only the natural we have yet to see or to even try to explain. To be agnostic, from this angle, is to simply know that you don’t know.

Einstein’s faith seems to have borne a deep resemblance to that of one of his heroes, Baruch Spinoza, the 17th-century Jewish philosopher and lens-grinder who was famously unwilling to credit a definitive distinction between God and nature. When it comes to seemingly ultimate questions that won’t submit to proofs, both men viewed relentless humility as the only posture befitting good faith. Einstein was known to accept, from those who chose to affix it, the label of agnostic, but he bristled at the thought of being pushy about it: “I prefer an attitude of humility corresponding to the weakness of our intellectual understanding of nature and of our own being.”

Similarly, Spinoza himself argued that the best place to land, if land we must, on these questions of faith is wherever it is we need to land in order to fortify ourselves in walking humbly and loving mercy and actively seeking the welfare of our neighbor. Dogma we will always have with us, I can imagine Einstein saying, but the dogma that denies the fact of deep relationship — the relativity within which we live and move and have our being — we can and must do without. It’s as if, for Einstein, anything we might call sin is, at its core, a denial of the fact of relationship. A deeper awareness of relationship, meanwhile, can overcome estrangement at any time.

Or as that other famously sweatered figure of the 20th century, Fred Rogers, once observed, “We are all intimately related. May we never pretend that we are not.” Like Rogers, Einstein invites us to lean into the mysterious fact of others and all that remains unfathomable in our shared existence. We can be inspired by complexity instead of fearing it. In a world where the powerful often deal in conversation-stoppers, shutting down honest inquiry as a threat and freethinking as a danger, Einstein starts the conversation up again and again with the alternative ethic — the better faith — of a curiosity without borders. May his tribe increase.

(David Dark is an author and a religion professor at Belmont University in Nashville, Tenn. He wrote this commentary to coincide with “Genius,” the National Geographic series on Einstein that premieres on Tuesday (April 25)) 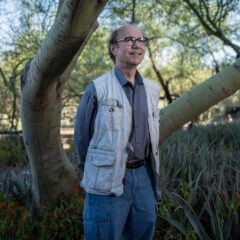