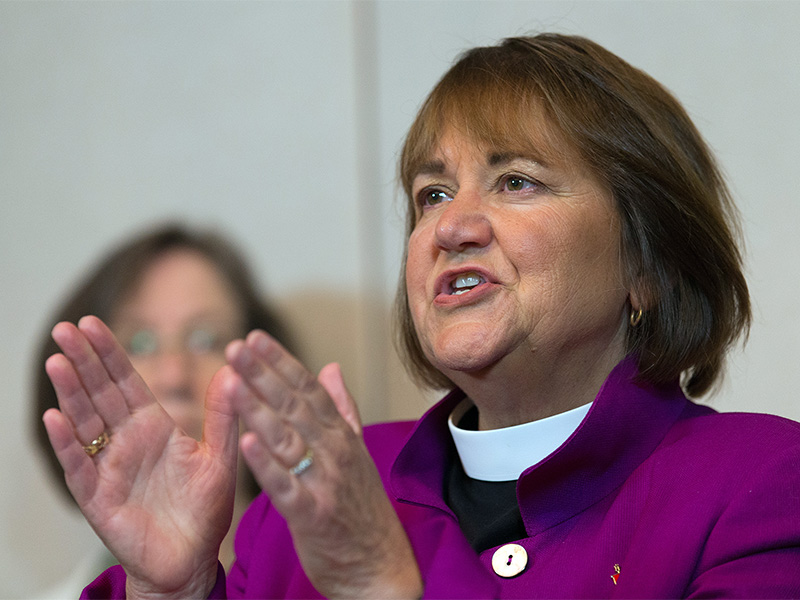 United Methodist Bishop Karen Oliveto talks about the denomination's more than 40-year history of struggle with LGBTQ issues during a news conference after arguments before the church's Judicial Council meeting on April 25, 2017, in Newark, N.J. The council heard arguments on whether a gay pastor can serve as a bishop in the United Methodist Church. Oliveto is the denomination’s only openly gay bishop. Photo courtesy of UMNS/Mike DuBose
May 1, 2017
Emily McFarlan Miller

(RNS) Last week's decision by the United Methodist Church's top court on the consecration of openly gay bishops may have been muddled, but that just shows that the Judicial Council is "a very good representation" of the denomination, said Bishop Karen Oliveto.

"We are not of one mind when it comes to the role of LGBTQI people in the life and ministry of the United Methodist Church," Oliveto said.

The 6-3 decision announced Friday (April 28) found that while the consecration of an openly gay bishop violates church law, Oliveto's consecration is not in question. She remains a bishop "in good standing" until an administrative or judicial process is finished.

Opponents of Oliveto's election and consecration have said the Judicial Council's decision did not go far enough since it did not remove her from office. Among them, Good News — an evangelical ministry within the United Methodist Church — released a statement calling it "convoluted and ultimately unsatisfactory."

"By allowing Oliveto’s election and assignment to stand, the decision has sown further confusion across the connection," it said.

The second-largest Protestant denomination in the United States has debated the role of LGBTQ people in the church at least since its global decision-making body, the General Conference, first deemed the "practice of homosexuality" to be “incompatible with Christian teaching” in 1972.

While the same debate has vexed the denomination for years, Oliveto said, "what's different is now there's someone in the room."

"It's no longer an issue. It's about people. My presence changes the conversation, and that’s my hope for the commission."

Friday's Judicial Council decision said that while “self-avowal does not nullify the consecration and cause removal from episcopal office,” it is enough to subject the bishop’s office to review. It also raised the possibility an “openly homosexual and partnered bishop,” as well as any clergy who participated in his or her consecration, could be charged with disobedience.

Several complaints — the beginning of judicial proceedings — already have been filed against Oliveto since she was made bishop last July of the Mountain Sky Area, which encompasses Colorado, Utah, Wyoming, Montana and Idaho.

It was just one of several decisions the council made last week impacting LGBTQ clergy. The council also ruled that the denomination’s regional New York and Northern Illinois annual conferences must consider all qualifications of a candidate for ministry. Both previously had decided they would not consider sexuality when evaluating candidates.

"They’ve made it even tougher for LGBTQI people to serve the church they love — to follow God's call to serve in this church. And it gives anyone the opportunity to file a complaint, to do a witch hunt, to do searches online of marriage certificates. It raises a veil of suspicion on people’s humanity, and that’s not the gospel," Oliveto said.

"It sends a chilling (message) at a time when more and more people are not having to stay in the closet because society has changed so much."