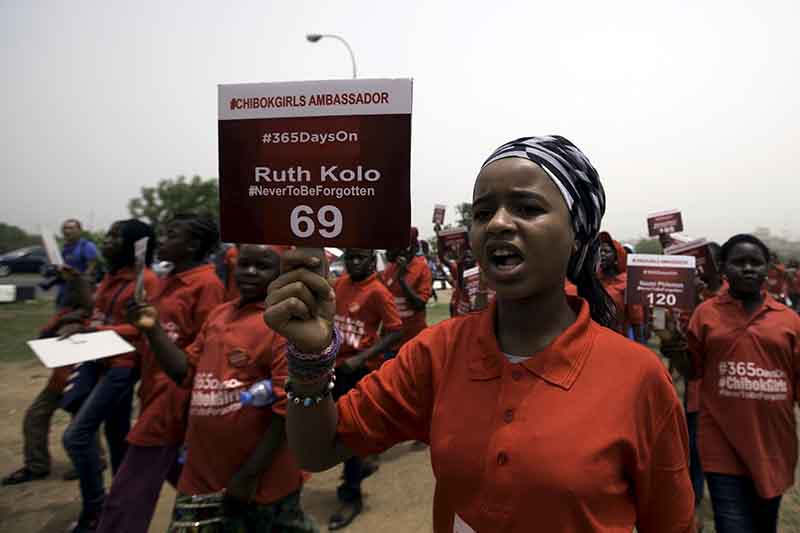 A girl holds a sign during a march on April 14, 2015, in Abuja, Nigeria, to mark the one-year anniversary of the kidnapping of more than 200 schoolgirls from a secondary school in Chibok by Boko Haram militants. Photo courtesy of Reuters/Afolabi Sotunde *Editors: This photo may only be republished with RNS-NIGERIA-GIRLS, originally transmitted on April 14, 2015.
May 6, 2017
Yonat Shimron

ABUJA/LAGOS, Nigeria (Reuters) Boko Haram militants have released 82 schoolgirls out of a group of more than 200 whom they kidnapped from the northeastern town of Chibok in April 2014 in exchange for prisoners.

Switzerland and the International Committee of the Red Cross helped secure the 82 girls in "lengthy negotiations," the presidency said on its Twitter account on Saturday (May 6).

President Muhammadu Buhari will receive the girls on Sunday in the capital, Abuja, it said, without saying how many Boko Haram suspects had been exchanged or disclosing other details.

A military source said the girls were currently in Banki near the Cameroon border for medical checks before being airlifted to Maiduguri, the capital of Borno state. From there they will be flown to Abuja.

The kidnapping was one of the high-profile incidents of Boko Haram's insurgency in Nigeria's northeast, now in its eighth year and with little sign of ending. About 220 girls were abducted from their school in a nighttime attack.

More than 20 girls were released last October in a deal brokered by the International Committee of the Red Cross. Others have escaped or been rescued, but 195 were believed to be still in captivity before this release.

Buhari said last month that the government was in talks to secure the release of the remaining captives.

The release of the 82 girls may give a boost to the former military ruler who made crushing the Islamist militant Boko Haram insurgency a key pillar of his election campaign in 2015.

He has hardly appeared in public since returning from Britain in March for treatment of an unspecified sickness.

Although the Chibok girls are the most high-profile case, Boko Haram has kidnapped thousands of adults and children, many of whose cases have been neglected.

The militants have killed more than 20,000 people and displaced more than 2 million during their insurgency aimed at creating an Islamic caliphate in northeast Nigeria.

Although the army has retaken much of the territory initially lost to Boko Haram, large parts of the northeast, particularly in Borno state, remain under threat from the militants. Suicide bombings and gun attacks have increased in the region since the end of the rainy season late last year.

Boko Haram, which last year pledged loyalty to the Islamic State group, has kidnapped hundreds of men, women and children in its campaign to carve out a medieval Islamist caliphate.