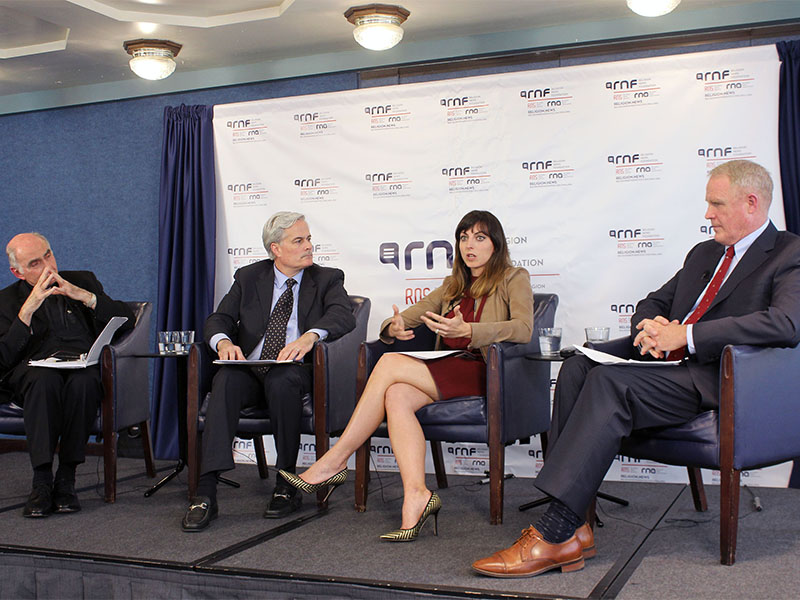 Simone Petrella, chief cyberstrategy officer of CyberVista, speaks during a panel discussion on “Cyber Attacks and Just War Theory” at the National Press Club on May 22, 2017. RNS photo by Adelle M. Banks
May 22, 2017
Lauren Markoe

WASHINGTON (RNS) Ethicists are only just beginning to grapple with the growing problem of cyberattacks, a form of aggression that challenges traditional ways of thinking about morality and war.

Some argue that the advent of cyberwar, as with the invention of nuclear weapons, pushes civilization across a boundary, said the Rev. Bryan Hehir, who teaches religion and politics at Harvard University's Kennedy School of Government. Assessing and responding to cyberthreats must differ from our moral approach to conventional warfare, Hehir said.

"The question is, how are we going to judge it?"

Hehir spoke on a panel Monday (May 22) that mulled the application of "just war" theory to cyberattacks, an increasingly damaging weapon wielded by governments, criminals, thrill-seekers and others trying to influence, destabilize and destroy. Ongoing investigations by several federal agencies link Russia to cyberintervention in the 2016 presidential elections.

Just war theory, rooted in the fifth-century writings of St. Augustine of Hippo, takes a middle ground between pacifism, which never allows for violence, and realpolitik, which is suspect of moral considerations in defense and warfare.

But cyberattacks present unique questions to their victims, who often can't figure out the perpetrators, said panelist Simone Petrella, chief of cyberstrategy at CyberVista, a Washington-based firm that helps companies defend themselves from cyberattacks.

"When you can't do attribution it is very difficult to figure out what your retribution is going to be," she said.

Retired Marine Corps Brig. Gen. David G. Reist, who has a background in cybersecurity, posed the question of governments' culpability for cyberattacks generated on their soil. "Are you responsible for what goes on in your own house?" he said.

Tom Gallagher, CEO and publisher of Religion News Service, who moderated the panel at the National Press Club, asked when a cyberattack might trigger a military response.

"What's your sense of the amount of harm that needs to be experienced," asked Gallagher, who is also CEO of the Religion News Foundation.

Hehir favored a large "gap" between a cyberattack and a conventional response.

War, he said more than once during the panel, is "at the edge of the moral universe."