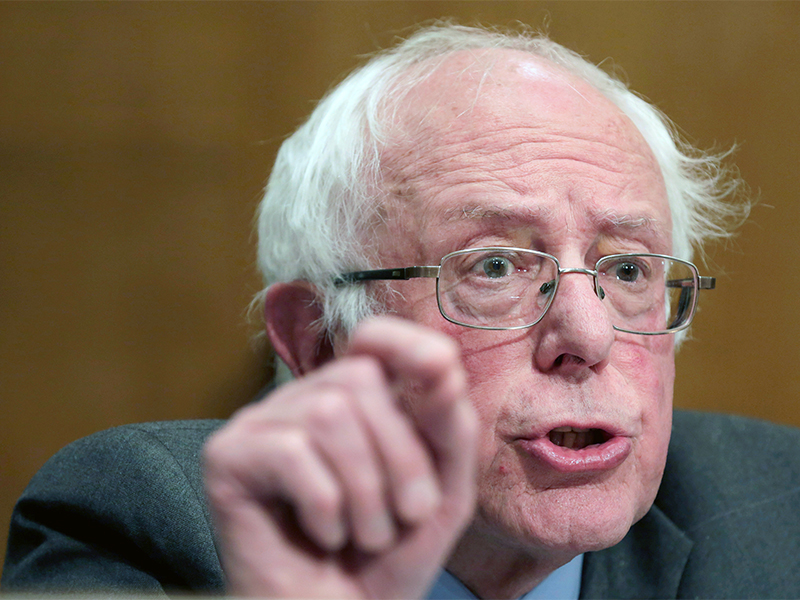 Over the past couple of weeks Bernie Sanders has caught unshirted hell from left, right, and center for criticizing a statement of religious belief by Russell Vought at a Senate Budget Committees hearing on Vought's nomination to be Deputy Director of the Office of Management and Budget.

In so doing, Sanders had, it was asserted, violated or all but violated the Constitution's ban on religious tests for office. Really?

In January 2016, Vought, vice president of Heritage Action, wrote a blog post for Erick Erickson's new right-wing website The Resurgent in which he defended the effort of Wheaton College (his alma mater) to terminate tenured political science professor Larycia Hawkins for saying that Muslims and Christians "worship the same God."

"Muslims do not simply have a deficient theology," Vought wrote. "They do not know God because they have rejected Jesus Christ his Son, and they stand condemned."

Fast forward to June 7, when the ACLU issued a press release from its legislative and advocacy counsel quoting the two sentences and suggesting that they raise concern whether Vought can "serve our entire nation in good faith." At Vought's hearing the following day, Sanders also quoted the sentences and asked, "Do you believe that that statement is Islamophobic?"

There followed an interchange in which Vought said he was simply a Christian speaking "in accordance with the statement of faith at Wheaton College," and Sanders responded: "I don’t know how many Muslims there are in America. Maybe a couple million. Are you suggesting that all those people stand condemned? What about Jews? Do they stand condemned too?"

Sanders proceeded to ask whether Vought thought that saying that non-believers in Jesus Christ stand condemned is "respectful of other religions," whereupon the following exchange concluded the colloquy.

Vought: Senator, I wrote a post based on being a Christian and attending a Christian school that has a statement of faith that speaks clearly in regard to the centrality of Jesus Christ in salvation.

Sanders: I would simply say, Mr. Chairman, that this nominee is really not someone who this country is supposed to be about.

So did Sanders violate the injunction of Article Six, Section 3  that "no religious test shall ever be required as a qualification to any office or public trust under the United States"?

Nope. The clause refers to formal religious requirements for government service, such as the English Test Acts of the 17th and 18 centuries, which were contrived to bar Catholics from serving in Parliament.

But let's consider Sanders' concern about Islamophobia. Does Vought's blog post justify it?

I'd say yes, based on Silk's First Rule of Anti-Muslim Prejudice (FRAMP): "If a conservative Christian condemns Muslims for not acknowledging Jesus Christ but avoids condemning Jews for the same reason, you can be pretty sure it's Islamophobia."

In his blog post, Vought quotes from Hawkins' defense of her position as follows: "I understand that Islam (and Judaism) denies the deity of Christ and the Holy Spirit, and leaves no room for the Cross and the Resurrection, but my statement is not a statement on soteriology or trinitarian theology, but one of embodied piety."

At the hearing, Sanders asks whether Jews stand condemned too.

In both cases, Vought fails to answer the Jewish question. Ergo, FRAMP can be invoked.

If you think that the Larycia Hawkins affair was just a Christian school's theological dispute regarding the "centrality of Jesus Christ in salvation," I've got a piece of the true cross to sell you. If you think Vought wasn't really avoiding mention of Judaism, just imagine a public figure writing on a leading political website: "Jews do not simply have a deficient theology. They do not know God because they have rejected Jesus Christ his Son, and they stand condemned."

For some decades now, social conservatives have insisted that religious belief cannot be separated from religious behavior. If that's so, it's fair game to ask a nominee with exclusivist beliefs whether he will be respectful of those of other faiths.