Much of my recent career has been spent analyzing and resisting right-wing politics, often mixed with religion.

But today I say that there is plenty to worry about on the left, too. There is left-wing politics and religion (or anti-religion), that also should be alarming to thoughtful people.

Here are a few of the most recent examples:

James Hodgkinson, the man who shot up the congressional Republican baseball practice, was clearly a disturbed and angry individual whose life had already done desperate harm to others before the shootings. But he found an outlet for some of that anger in liberal politics and strongly anti-Republican social media groups. Hodgkinson’s online presence is a case study in the echo chamber of angry social media. His targeting of the Republican baseball practice can only be described as political violence, indeed, as attempted political assassination. This marks a very disturbing new descent in recent American politics.

This past weekend, a gay rights march in Chicago called the Dyke March became national news when three marchers carrying Jewish Pride flags (which are Israeli flags superimposed on a rainbow) were reportedly harassed and finally ejected from the march. In a march intended to represent “intersectional” justice causes, pro-Palestinian and anti-Israel sentiment was too strong for the “Wider Bridge” group representing lesbian and queer Jews to be allowed a presence in the march. (Everybody should read the full news story I have linked to here from the “Windy City Times,”  which reflects the peculiar nature of internal liberal-radical politics right now.)

Madonna fantasizes about blowing up the White House. Kathy Griffin displays a likeness of Trump’s severed head. Stephen Colbert uses a crude term to describe Trump as Putin’s sexual boy toy. [Bill] Maher suggests that Trump and his daughter Ivanka have engaged in incest. I don’t question the earnestness of these entertainers’ objections to Trump, which are wholly warranted. I ask whether they’re converting even one person with a contrary point of view.

A number of recent campus incidents around the country also suggest that a kind of left-wing fundamentalism is on the rise. Sometimes these incidents are egged on by the presence or words of outside provocateurs, but other times it is simply professors who are perceived as crossing liberal orthodoxy boundaries and then facing the rage of their students and some of their colleagues.

Why is all of this disastrous for liberals?

It is disastrous culturally, because it widens the gulf between our warring tribes, which degrades the environment all of us live in.

It is disastrous politically, because left-wing fundamentalism hurts the image of the Democratic Party and liberals in general and is a sure loser in state and national races in most of the country.

It is disastrous intellectually, because it shuts down intelligent reflection on difficult issues and leaves dissenters or potential dissenters afraid to express themselves. 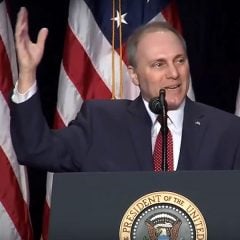 General story
‘Purpose over politics’ at the National Prayer Breakfast
Follow us on Facebook!
Submit your photos to RNS