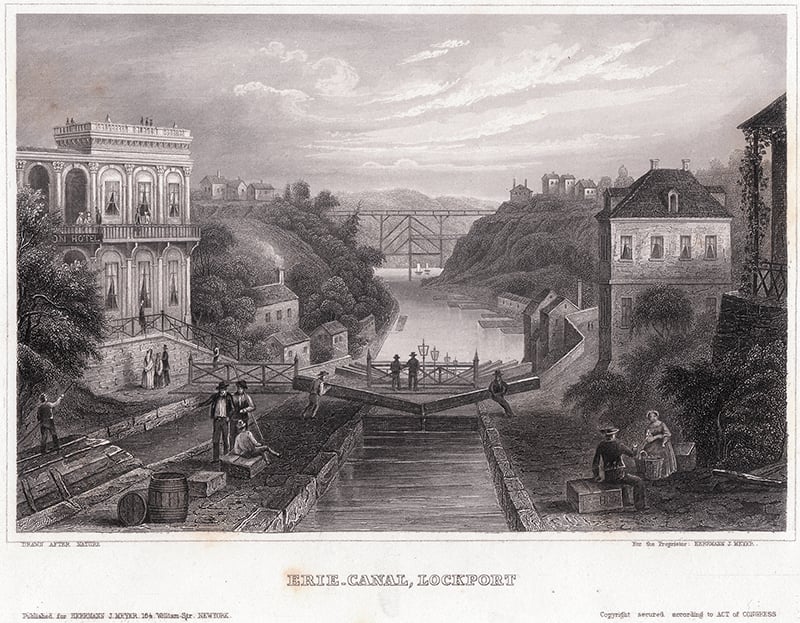 A lithograph of the Erie Canal at Lockport, N.Y., around 1855. Image courtesy of Creative Commons/published for Herrmann J. Meyer

It was an artificial river, 4 feet deep and 40 feet wide, cutting across New York state.

Like the Silk Road in Asia, the Erie Canal not only established physical links across geographic regions, it also remade the social and religious lives of everyone it touched.

Albany newspapers, Genesee flour, Syracuse salt and Western timber traveled on the canal alongside theater groups, former slaves, tourists, industrialists and religious revivalists. This “one thronged street, from Buffalo to Albany,” as Nathaniel Hawthorne phrased it, exceeded its transportation uses to become an empire builder, a political-economic superpower that was inextricable from a spiritual empire.

Physical work on the Erie Canal began on July 4, 1817, when upstate New York was one vast wilderness in the eye of the young nation. Within three decades of its opening this “psychic highway” cultivated experimental spiritual groups, including the Mormons, the Adventists, spiritualists, followers of a revived apocalypticism and utopian communal societies such as the Oneida Community, with the Amana Colony and the Shakers passing through. The emotion-laden revivals of the Second Great Awakening also ignited along the way, giving rise to the evangelicalism that we know today.

Meanwhile, the canal engendered the religiously infused social movements of the abolition of slavery, women’s suffrage and temperance. Little wonder the 19th century’s most famous preacher, Charles Finney, called this area the “Burned-over District.” Even so, this term belies a deeper truth: Flowing through the ashes were currents of American faith that continue to influence us today.

A map of the Erie Canal through New York. Map courtesy of Creative Commons

The Erie Canal is the place where the young United States, and its religiosity, ceased looking to the East and the past — Europe and New England — and began looking West and to the future — to a grand unfolding continent.

The canal follows the only significant gap in the Appalachian mountain chain extending from Maine to Georgia, a geographical fact attributed by George Washington and his contemporaries to the goodness of “Providence.” This was God’s gift to the fledging nation, inspiring citizens to move west and glean benefits from the natural riches of the continental interior. National mythologies about Manifest Destiny flowed from geographical realities and a good dose of Yankee engineering.

Far from the shackles of church authorities that dominated European life for centuries, land along the canal provided ample imaginative possibilities for working out one’s salvation and ushering in the reign of God’s kingdom on earth. Apocalyptic fever ensued, resulting in a series of self-styled prophets who believed themselves to be voices crying in the wilderness.

Joseph Smith was one, and the global phenomenon that is Mormonism today began in the canal town of Palmyra, N.Y., near where Smith had his visions and discovery of the golden plates. The first 5,000 copies of the Book of Mormon were printed on a press that arrived via canal boat in 1830. The next year, as Smith and his followers were driven out of town by angry fellow citizens, they got on a canal boat heading west, into frontier history.

Elsewhere, John Humphrey Noyes responded to the imminent end of the world by establishing the utopian Oneida Community in 1848, supported through canal-based trade in agriculture and animal traps (and eventually, silverware). The group was founded on principles of “biblical communism,” meaning that all things were shared equally among members, including children and spouses. Noyes himself coined the term “free love” more than a century before the hippies, while his sectarian impulses let us know there is little new about the “Benedict Option” making waves at the moment.

Noyes and Smith were never too specific about the coming end of the world. But up the interconnected Champlain Canal, a wheat-farmer-turned-Baptist minister named William Miller predicted the second coming of Jesus on specific dates in 1843, and then 1844. The failed predictions led to what would become known as the Great Disappointment (lucidly portrayed in the season three opening of HBO’s “The Leftovers”).

Many of Miller’s followers lost faith and turned to a host of fledgling Christian sects for connection, while others regrouped in Albany and formed the Adventist tradition, a movement that is thriving today across the Southern Hemisphere.

An aqueduct over the Mohawk River at Rexford, N.Y., in the early years of the Erie Canal. It was one of 32 navigable aqueducts on the Erie Canal. Photo courtesy of Creative Commons/Clifton Park Collection

God’s coming kingdom was not awaited passively, but needed to be worked toward, creating a more equitable world in the here and now. The 19th-century canalway allowed the mingling of former slaves and outspoken abolitionists such as Frederick Douglass and Sojourner Truth as they worked alongside women’s rights activists Elizabeth Cady Stanton and Susan B. Anthony in Rochester and Seneca Falls. Collectively they sought to articulate social applications for the religious roots of freedom and equality.

Over in Syracuse, Matilda Joslyn Gage worked with local education boards to get women elected, became involved with the native Iroquois people in the area, worked with Stanton and Anthony on the multivolume “History of Woman Suffrage” and had long conversations with her son-in-law L. Frank Baum, canalway resident and author of the great American utopian mythology, “The Wonderful Wizard of Oz.”

Stanton was the cousin of Utica native and Christian reformer Gerrit Smith, who funded John Brown’s raid on Harpers Ferry, promoted the Underground Railroad along the Erie Canal and worked alongside Douglass in publishing anti-slavery newspapers in Syracuse and Rochester. Gage’s life alone amply shows the six degrees of separation created through social life along the canal.

When telegraph and railroad lines were established in the middle of the 19th century, the canal’s influence began to decline. Even so, many of these new routes followed the path of the canal and fed off the deeply established urban areas: Canal towns became rail towns, and what were once new spiritual experiments became part of the establishment, primed and ready for export, seeping their way into religious life across the westering nation.