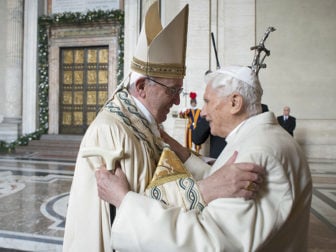 Although Crux’s John Allen likes to pretend otherwise, Roman Catholicism is now clearly divided between the Party of Francis and the Party of Benedict. Not since the days of the Jesuits and the Jansenists has the Catholic elite — clerical and lay intellectual — been at daggers drawn as it is now.

Yesterday, the New York Times nicely encapsulated the partisan divide in profiling the two big Irish-American archbishops facing each other across the Hudson — Timothy Dolan of New York and Joseph Tobin of Newark. Can anyone doubt that by making one of the country’s most progressive bishops a cardinal and sending him into its dominant media market Francis wasn’t sending a shot across the bow of Benedictine conservatism?

On the other side, Pope Emeritus Benedict delivered a shot of his own Saturday in the form of a eulogy for the cardinal archbishop of Cologne, Joachim Meisner, who retired in 2014.

“We know that it was hard for him, the passionate shepherd and pastor of souls, to leave his office, and this precisely at a time when the Church had a pressing need for shepherds who would oppose the dictatorship of the zeitgeist, fully resolved to act and think from a faith standpoint,” Benedict wrote. “Yet I have been all the more impressed that in this last period of his life he learned to let go, and live increasingly from the conviction that the Lord does not leave his Church, even if at times the ship is almost filled to the point of shipwreck.”

Meisner, the leading conservative in the German hierarchy, died the day after Francis announced that he would not be reappointing Cardinal Gerhard Mueller, the man Benedict selected to head the Vatican’s orthodoxy bureau (the Congregation for the Doctrine of the Faith). Can anyone doubt that Benedict intended a criticism of the state of the Church under his successor?

But the most explicit articulation of the divide came last week, by way of an article in La Civiltà Cattolica, the Jesuit bimonthly that has led the way in promoting the Franciscan agenda. Co-authored by editor Antonio Spadaro, the article takes aim at what it considers the unholy alliance between “Evangelical Fundamentalism” and “Catholic Integralism.”

Although, as Michael Sean Winters points out over at the National Catholic Reporter, it is possible to find flaws in Civiltà‘s account of political evangelicalism, there’s no doubt that the alliance between conservative evangelicals and Catholics promoted by the late Richard John Neuhaus and George Weigel is now a real thing. And as you might expect, the Jesuit journal recognizes in this alliance a latter-day version of the Protestant fellow-traveling of the Jansenists of old.

That includes a dualism (Manichaeism) that insists that the world is irremediably divided between the children of light and the children of darkness. It includes a love affair with capitalist success, now in the form the prosperity gospel. And it involves a hyper-valorization of religious liberty.

“The erosion of religious liberty is clearly a grave threat within a spreading secularism,” writes La Civiltà Cattolica. “But we must avoid its defense coming in the fundamentalist terms of a ‘religion in total freedom,’ perceived as a direct virtual challenge to the secularity of the state.”

Can anyone doubt that this is a direct smack at the United States Conference of Catholic Bishops’ ill-conceived Fortnight for Freedom?

Integralism is the dream of a self-sufficient Catholic social, intellectual, and political culture capable of reasserting the Church’s power in Catholic countries and guaranteeing the orthodoxy of Catholic populations in non-Catholic ones. This was resoundingly rejected by the Second Vatican Council — a rejection that lies at the core of the Jesuit pope’s attempt to revivify his church.

In the words of La Civiltà Cattolica:

Francis wants to break the organic link between culture, politics, institution and Church. Spirituality cannot tie itself to governments or military pacts for it is at the service of all men and women. Religions cannot consider some people as sworn enemies nor others as eternal friends. Religion should not become the guarantor of the dominant classes. Yet it is this very dynamic with a spurious theological flavor that tries to impose its own law and logic in the political sphere.

You may consider this the platform of the Party of Francis.