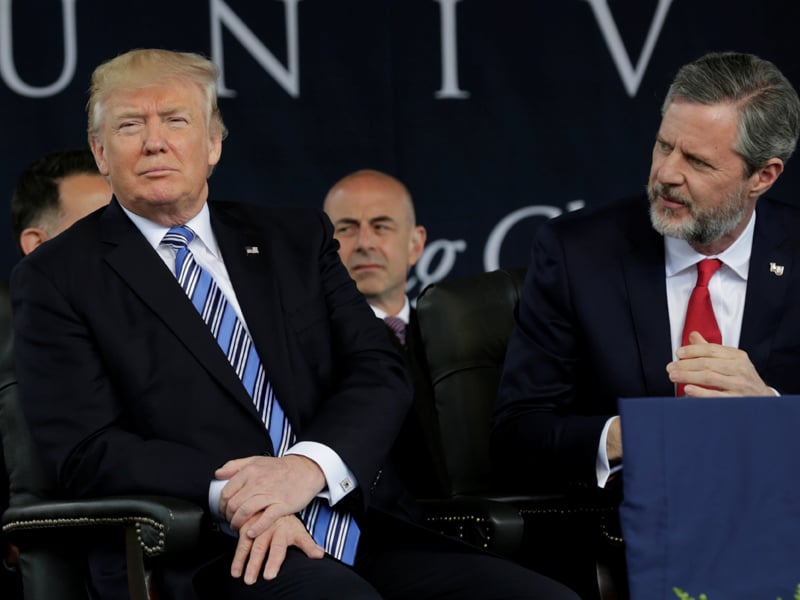 Take popular Bible teacher Beth Moore. On Sunday she made clear that President Trump’s prevaricating response (“on many sides … on many sides”) to Charlottesville was woefully inadequate.

We cannot renounce what we will not name. It’s called White Supremacy. And it is from hell. Call it. Condemn it.

Then there’s Russell Moore, who heads the Southern Baptist Convention’s Ethics and Religious Liberty Commission, who retweeted one of his tweets from two months ago:

The so-called Alt-Right white supremacist ideologies are anti-Christ and satanic to the core. We should say so. #SBC17

There were even members of Trump’s evangelical advisory board — which the Moores (no relation) are not — who were quick to condemn what needed to be condemned. Like Ronnie Floyd, past president of the Southern Baptist Convention, who on Saturday tweeted out a statement that said “white nationalism and white supremacism are anathema to the teachings of Christ.”

But then there was evangelist Rodney Howard-Browne, sounding the tocsin for moral equivalence:

We strongly condemn all white supremacists, KKK, Antifa and Black Lives Matter, Main Stream Media in the strongest of terms !!!!!

Shame on the politicians who are trying to push blame on @POTUS Trump for what happened in #Charlottesville, VA. https://t.co/K28uWp6MnR

Meanwhile, from Jerry Falwell Jr., not so much as a word about Charlottesville, just an hour and fifteen minutes down the road from Liberty University. Nada from Richard Land either.

On Monday afternoon Trump read a statement declaring that “racism is evil” and that “those who cause violence in its name are criminals and thugs, including the KKK, neo-Nazis, white supremacists and other hate groups that are repugnant to everything we hold dear as Americans.”

But not before, earlier in the day, responding to Merck Pharmaceuticals CEO Kenneth Frazier’s principled resignation from a White House management council with:

Now that Ken Frazier of Merck Pharma has resigned from President’s Manufacturing Council,he will have more time to LOWER RIPOFF DRUG PRICES!

Does anyone believe that that’s not the real Donald Trump?

It’s time for members of Trump’s evangelical advisory board to follow Frazier’s lead. Some of you have talked the talk. Now walk the walk.