JERUSALEM (RNS) – The arrest of five antiquities dealers who allegedly helped Hobby Lobby purchase illegally obtained ancient artifacts has shone a spotlight on the sale of antiquities in Israel and revived questions about the ethics of the trade in general.

On July 30 five Jerusalem-based Palestinian dealers were arrested and charged with tax evasion on the sale, which took place in the United Arab Emirates. Israeli and American authorities believe the dealers drafted bogus invoices and receipts for antiquities sold to Steve Green, president of the national craft store chain.

The Justice Department last month announced a $3 million settlement with Hobby Lobby, after an investigation into its acquisition of 5,500 artifacts that originated in Iraq. The artifacts, which Hobby Lobby has since returned, were earmarked for the Museum of the Bible, which is being funded chiefly by the Green family and slated to open in Washington, D.C., in November.

Israel is the only country in the Middle East that permits state-licensed antiquities dealers to sell ancient artifacts. This, critics say, encourages unscrupulous people around the region to loot and smuggle valuable items via licensed Israeli dealers.

“In all other countries – Jordan, Lebanon, Iran, Saudi Arabia, Turkey, Iraq — it is illegal to deal antiquities. The problem is that the dealers that we gave permission to deal antiquities are using our law to deal in looted artifacts,” Eitan Klein, deputy director of the Israel Antiquities Authority’s Unit for Prevention of Antiquities Looting, told The Times of Israel.

READ: Despite smuggled antiquities purchase, some say criticism of Bible museum is unfair

The country’s 1978 Antiquities Law was enacted to protect artifacts through strict regulation, according to the authority.

The law requires the authority to approve the transfer of antiquities from a museum or private collection. Dealers must be licensed and keep a precise inventory of any item that dates from before the year 1700. They are prohibited from selling antiquities considered to be “of national value.” And no antiquities may be taken out of Israel without the written approval of the IAA.

The law was tightened in 2012 and again last year, so that all licensed dealers are now required to share images of everything in their inventory. Fraudulent transactions are easier to detect now, but the reforms did not come soon enough to prevent the Hobby Lobby scandal.

In 2010 Hobby Lobby, which is headquartered in Oklahoma City, paid $1.6 million for 5,500 ancient artifacts from Iraq. Six years later, an investigation by U.S. and Israeli law enforcement and tax officials determined that dealers in the United Emirates and Israel had intentionally misidentified the items as Turkish ceramics.

“We should have exercised more oversight and carefully questioned how the acquisitions were handled,” Green said in a July 5 statement. “We have implemented acquisition policies and procedures based on the industry’s highest standards.”

READ: Experts say Hobby Lobby must have known it was illegally importing artifacts

Many archaeologists in Israel and elsewhere “are against the sale of antiquities because it leads to the destruction of cultural heritage,” said Aren Maeir, an Israeli archaeologist in charge of excavations at Gath, the home of the biblical Goliath. “If there is a market for illegal antiquities, some person will go out and excavate illegally.”

In many cases, Maeir said, those doing the digging are untrained peasants whose unprofessional means of excavating end up destroying both antiquities and vital information about an artifact’s provenance.

If it were up to Maeir, the sale of antiquities would be seen as just as problematic as game hunting.

“In the first half of the 20th century many rich people had the heads of animals mounted on the walls of their studies. Today that’s considered despicable. That’s how people should feel about the archaeological grave robbers who are robbing nations of their national heritage.”

“The removal of artifacts from a country belongs to the imperial era and this should not be happening anymore. It dates to a time when archaeologists thought the nations where they excavated were primitive and saw themselves as the guardians of cultural treasures.”

“In 2000 there were 120 licensed dealers; today there are only 37,” Ganor said, pointing to Antique-Net, a new system through which they must list and upload photographs of every item in their inventory. Only after the Antiquities Authority approves a sale will it be transferred to the buyer’s inventory list.

Ganor said he is against a ban of all antiquities sales “because sometimes we get a unique or important item, such as the Dead Sea Scrolls, and bring it to a museum in Israel, where it is protected.”

The first Dead Sea Scrolls were discovered by Bedouin shepherds who sold them to an antiquities dealer. They eventually came to the attention of archaeologists.

“We need even better cooperation between law enforcement authorities and between countries. We already cooperate with the U.S. Department of Homeland Security and with Interpol and other Middle East countries.

“When the people who sell antiquities on the black market understand that we are jointly working against them, illegal sales will end,” Ganor said. 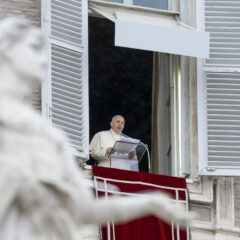 Opinion
The world’s largest Muslim pilgrimage site? Not Mecca, but the Shiite shrine in Karbala 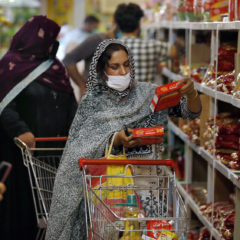 News
Women in Muslim countries prepare for ‘least, most’ Ramadan 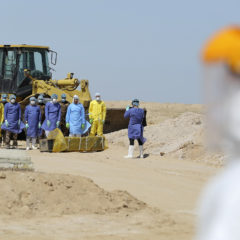