(RNS) — There is a way for conservative Christians to make a strong, winsome case for traditional views of sexuality and gender. Unfortunately, the Nashville Statement isn’t it.

This week, a group of prominent evangelicals released a “Christian manifesto,” which argued that LGBT people who embrace their sexual or gender identity are living in sin. The statement was coordinated by the Council on Biblical Manhood and Womanhood, and many intelligent and respectable people, including my father, signed it. I assume most did so because of their convictions, however misguided, rather than hatred.

When the statement was released, a broad coalition of progressive Christians responded with disbelief, anger and mourning by turns. But dissenters can take a deep breath and put their sackcloth back in mothballs. A closer look at this statement reveals a number of fatal flaws, which are likely to render it impotent. And the history of similar efforts indicates the Nashville Statement will almost certainly fail to shape broader conversations on the issues it addresses.

A casual reader of the Nashville Statement can quickly spot its problems, regardless of theological convictions. But here are the three most consequential:

Terrible timing: Set aside the content itself for a moment, and consider when this coalition decided to release its statement. An unprecedented hurricane was ripping through Texas, leaving countless people homeless and many others dead. The nation still sits in shock and grief as images of the carnage assault us on television and social media. Choosing to release this statement now, rather than waiting even a few days, is not just kind-of-sort-of misguided. It is inexplicably callous and exhibits Trump-level tone-deafness.

When it comes to messaging efforts, the when is just as important as the what. Or to frame it with a phrase my dad often spoke to me when I was a child, “The right words spoken at the wrong time are the wrong words.”

A quick review of the history of this sect of American Christians reveals a pattern of aggressive and harmful behavior against LGBT people. Growing up, I heard preachers aplenty talk about gays and lesbians like animals. They were spoken of as filthy, disgusting abominations that made God’s blood boil. I am not the exception. To wit:

Acknowledging these failures would have softened the edges of an otherwise blunt statement, and in the process, would have ceded no theological ground. That the drafters of this statement did not realize the need to address their own history, or realized it and yet simply chose to ignore it, is grounds for questioning whether they are as smart and culturally savvy as they think they are.

Christian theology generally asserts that repentance is the key that unlocks the door of conversion. The Nashville Statement attempts to convert the culture while refusing to repent of its own failures on these very issues.

Marginalization tactics: An earmark of fundamentalism is marginalization. It is how the movement remains pure. Whenever someone disagrees or dissents, even if they themselves are not implicated in the “sin,” the person must be cut off and cast out. Article X of the Nashville Statement repeats this error by rejecting that Christians can “agree to disagree” on these matters.

Instead, the document asserts that “it is sinful to approve of homosexual immorality or transgenderism and that such an approval constitutes an essential departure from Christian faithfulness and witness.” In other words, if you hold to every doctrine in every Christian creed since Jesus’ resurrection but you disagree with the signers on this issue, you are no longer a faithful Christian.

The problem with these kinds of heavy-handed tactics is that they often backfire. And a case in point is the LGBT debate itself.

Three decades ago, gays and lesbians merely wanted some sort of civil recognition of their unions. They wanted the ability to visit their loved ones in the hospital and leave their inheritances to their partners. Conservative Christians rejected even modest compromises at the time.

But then the balance of power shifted. Now conservative Christians are in the minority. They are crying “uncle” in similar fashion, asking to be left alone so they can live their lives (and refuse to bake cakes for whomever they like). LGBT people and advocates aren’t having it. They are returning the favor, refusing to compromise with the ones who oppressed them for decades.

Solomon said that if a man rolls a rock, it will be rolled back onto him and if a man digs a pit, he will fall into it. Or to paraphrase the words of Jesus, “Those who live by marginalization tactics will die by them also.” Conservative Christians are quickly becoming the minority on these matters. For better or worse, they will soon be the ones who are considered unfaithful and sinful.

These three flaws, and many others, will likely shipwreck the Nashville Statement. But there is one other glaring reason that progressives should slow their roll: Signing statements almost never lead to lasting cultural change.

I think of the 1978 “Chicago Statement,” which made a case for the inerrancy of the Bible. This became a rallying cry for many who were already committed to the doctrine, but I’ve never met someone who was convinced to change their mind as a result of reading it. In fact, some of the most popular and influential books on the Bible in recent years have argued against this doctrine. If the Chicago Statement shaped culture, you can’t tell it.

Or one might consider the 1997 “Colorado Springs Guidelines,” which made a case for keeping gender-inclusive language out of Bible translations. Despite the support of influential leaders like James Dobson, you’ll be hard-pressed to find a person outside of evangelical academia who has even heard of this statement. Subsequent conservative translations that claimed to follow the Colorado Springs Guidelines would have presumably done so with or without the statement. Meanwhile, several popular Bible translations have violated the principles of these guidelines in their translation decisions.

Or for a more recent example, consider the “Manhattan Declaration” from 2009. This statement made a case for conservative positions on marriage, abortion and religious liberty. Like the Nashville Statement, it was met with much fanfare and criticism at the time. Organizers of the Manhattan Declaration even hired a full-time spokesperson, Eric Teetsel, to promote its message. In no time, the fledgling organization was broke and Teetsel was sent packing. Its effect on the American society and public policy was nil.

Conservative Christians seem to love issuing statements, all of which share two common characteristics: They oddly bear the name of the city in which they were drafted or released, and they all fail to shape the broader culture.

When it comes to issues of sexuality and gender, a statement like this is unlikely to move the needle with those who aren’t already in agreement. It is all head and no heart. It speaks to your mind but fails to look you in the eyes. It is intellectual, but not pastoral. It dialogues about people, rather than with them. It acknowledges the theology of these issues but never the humanity. It is all words and no word-made-flesh.

So progressives who hope for change should take a deep breath and stay the course. Keep comforting your friends. Keep making space for those whom others refuse to welcome. Keep loving your neighbors, and don’t forget that these signers are your neighbors, too.

Like so many before it, this statement won’t change anything. But if you keep leading with love, you can change everything. Proclamations don’t shape history; people do. 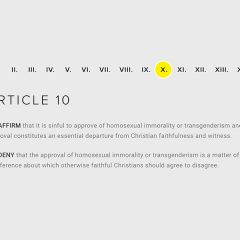 Beliefs
American Christianity’s divisions go all the way down

Arts & Culture
The Nashville Statement is a vision of Christian salvation, Trump-style

Gender & Sexuality
Evangelical leaders try to hold the line on gender
Follow us on Facebook!
Submit your photos to RNS