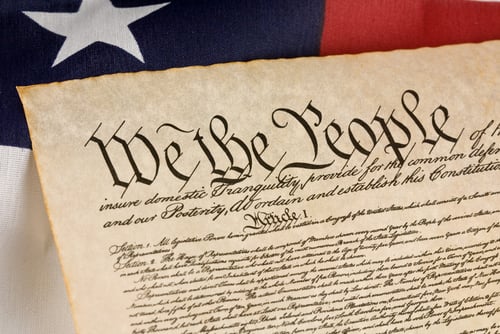 The U.S. Constitution with an american flag.
October 10, 2017
Jeffrey Salkin

(RNS) — The president of my congregation shot me an email yesterday. “Rabbi, a reminder: we need your parsonage allowance for the board meeting on Thursday evening.”

So, I sat down with a pad of paper and a calculator.

Very simple: a member of the clergy, who performs sacred duties for a religious organization, can exclude all housing expenses from taxable income.

But, now, clergy of all theological stripes are gulping in fear. The other day, a federal judge in the United States District Court for the Western District of Wisconsin declared that the longstanding clergy housing allowance violates the establishment clause of the First Amendment.

The plaintiff in this matter is the Freedom From Religion Foundation, an atheist group.

Which raises the question: is it “right” for members of the clergy to be able to exclude their housing expenses from income for tax purposes? (By the way: they are not alone in this regard; members of the military can take advantage of a similar deduction). Isn’t this a violation of the idea of the separation of church and state?

Let me respond – not as an accountant, nor as an attorney (and I play neither on television), but as a rabbi who knows something about America and its complex relationship to religion.

First, despite the well-publicized salaries and life styles of rich and famous mega-church clergy people, this is hardly the norm for most members of the clergy.

There is a reason why the phrase “poor as a church mouse” exists. It was the original reason for this ruling — to protect ill-compensated ministers.

Many clergy members couldn’t afford to do what they do without the parsonage allowance.

And, neither could their congregations afford to keep them as pastors.

Second, once we start messing around with parsonage allowance, we will be travelling down a very slippery slope. It could lead to the removal of tax-free status for synagogues, churches, and mosques. It will make it impossible for many of them to function.

Third, this allowance does not seem to constitute a violation of the separation of church and state.

As I understand it, separation of church and state means that the government cannot establish a state religion. This was clearly a reaction to the European situation, in which every country has a default religious identity.

This, it seems to me, is the overarching philosophical architecture that brings us personage allowance.

America is among the most religious of all Western nations. Church attendance in America is higher than that of almost any other Western country.

More than 90 per cent of Americans believe that there is a God – whatever He or She or They are called. Belief in God is profoundly American – so American, that an avowed atheist would have serious trouble getting elected to a major political office.

It is also true of the various protest movements that are popping up all over this country, like dandelions on a lawn.

You simply cannot discount the role of faith in American public life. At the dawn of the Enlightenment, the great Jewish philosopher Moses Mendelsohn put it this way: The role of religion is comfort, and instruction, and admonition. That is how religion has functioned in America.

You are free to say: yes, religion has been important in America. But, so, too: education, music, art, social work – and we don’t give tax incentives to those professions – many of whose practitioners earn far less than clergy. And you would not be wrong.

You are likewise free to say: Jeff, as a rabbi, you have a personal stake in this conversation, don't you? And you would not be wrong. I never took any kind of oath to totally foreswear self interest, and the interests of my religious community.

Nevertheless, parsonage — as a privileged status for clergy — comes out of an American way of viewing religion. Religion, despite its many design flaws and bad practitioners, is a societal good. That is why I hope that parsonage, and the various tax breaks for religion, remains an American reality.

Without it, our religious institutions would be far weaker.

And so would American life, in general.

August 10, 2020
Related Posts
By Adelle M. Banks
From changing lives to preaching at iPads: How clergy are coping with the new normal
By Alejandra Molina
Months into COVID-19, funeral directors and clergy continue to innovate death care
By Thomas Reese
Four ways to tell a prophet from a political puppet
By Melinda Moore, Glen Bloomstrom
Giving back to those who serve: Caring for our faith leaders
By G. Jeffrey MacDonald
How a part-time pastor can keep a financially strapped church alive