Ground zero for spiritual politics this fall is Alabama, where Roy Moore, paladin of the religious right, is seeking Jeff Sessions’ old seat in the U.S. Senate. You figure that Moore, the Republican in the race, would walk into office pretty comfortably.

So it comes as something of a surprise that the latest poll, from Fox News, shows him tied with Democrat Doug Jones, a former U.S. Attorney who successfully prosecuted two Ku Klux Klan members for their roles in the notorious 1963 16th Street Baptist Church bombing.

But Moore, whose defiance of federal court orders led to his being twice forced out of office as the state’s chief justice, is pretty far out even for Alabama. If you look carefully, you can see that even white evangelicals have their doubts about the guy who planted a Ten Commandments monument in the state judicial building and ordered probate judges not to hand out marriage licenses.

To be sure, Moore wins the support of white evangelicals by a wide margin, 68 percent to 17 percent. But of those that support him, 41 percent do so “with reservations.” Less than half (49 percent) support him “strongly.”

When asked how they feel about Moore’s views, only 54 percent of white evangelicals say they are “just what we need in our senator,” while 24 percent view them as “out of step with where Alabama is today.”

Of course, it will take the state’s non-white evangelicals to push Jones over the top on December 12. And the smart money says that when the time comes, Moore’s support among the most likely voters — older ones, especially — will prevail.

But between the lukewarmness of Moore supporters and the intensity of his opposition — 32 percent of Jones supporters cite opposition to Moore as the main reason for their support — the smart money may turn out to be on the wrong horse. 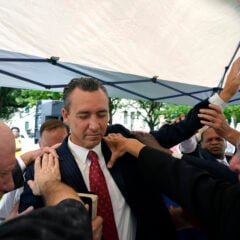