(RNS) — Amid revelations that extremist groups have exploited social media platforms like Facebook and Twitter to influence voters and steer readers toward fake-news, the nation’s premier anti-Semitism watchdog is training its eye on the tech world to combat hate speech online.

The Anti-Defamation League will hold a summit in San Francisco on Nov. 13 featuring Reid Hoffman, the co-founder of LinkedIn, along with executives from Facebook, Twitter and Reddit to discuss ways of fighting the growing menace of cyber hate.

There it is expected to announce the Silicon Valley location of its new Center on Technology and Society. The center, funded in part by the Omidyar Network, a philanthropic investment firm established in 2004 by eBay founder Pierre Omidyar and his wife, Pam, was first announced at the South by Southwest Interactive conference in March.

“We’re doing it in the Bay Area specifically because of the fact that we see the battleground in fighting hate on Facebook and in social media,” said Jonathan Greenblatt, ADL’s CEO.

The second annual “Never is Now” summit — held last year in New York — is part of an expanded ADL effort to put its energy and resources toward partnering with the tech companies to promote best practices and other solutions to online extremism.

Much of the spike in harassment against Jews and other minorities may be a result — many trackers of online hate believe — of the 2016 presidential election and the rise of nationalism and the so-called alt-right under President Trump.

But the ADL’s work with the tech community precedes the election. Its Working Group on Cyberhate, a collaboration with Facebook, Google/YouTube, Microsoft, Twitter and Yahoo, published its “Best Practices” initiative in 2014.

The organization is also a partner to Twitter’s Trust and Safety Council developing tools and practices to combat abuse, harassment, and bullying on the social media site. In addition, it is working with Google on an artificial intelligence project.

“We’re engaged with the companies on an almost daily basis trying to deal with this problem,” said Greenblatt, who added that the ADL does not receive money from the tech giants.

“Should they be doing more?” he asked. “Yes. Should they be responding more quickly? Yeah. Should we be pushing them to do so? Yes. But I’ve seen a change in the way the companies are responding to this in the last 12 months. And I’m encouraged because we need them and they seem increasingly interested in trying to tackle the issue.”

The one-day conference will feature talks such as “Speaking Truth to Hate in an Age of Texts & Tweets,” and “Where the Real and Virtual Intersect: Re-thinking Tech’s Role,” in addition to sessions on American Judaism and Israel. 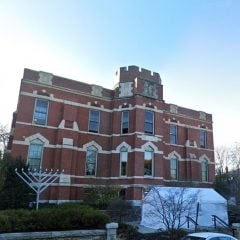 Religion Hub
Suit seeks to limit anti-Muslim speech on Facebook but roots of Islamophobia run far deeper
Follow us on Facebook!
Submit your photos to RNS