Since taking office, Donald Trump has done everything in his power to win the hearts and minds of white evangelicals, and they in turn have become his staunchest supporters. In Virginia Tuesday, Ed Gillespie and his fellow Republicans discovered the perils of this strategy.

Gillespie campaigned according to the Trump playbook, hitting the issues of abortion and immigration hard. And he had Ralph Reed’s Faith and Freedom Coalition (successor to Reed’s Christian Coalition) littering the churches with their voter guides.

And yes, white evangelicals turned out in big numbers. The problem was, there weren’t enough of them. And the other side was loaded for bear.

For all the talk of shrinking numbers of white evangelicals, their proportion of the turnout was almost identical — 27 percent in 2013 and 26 percent in 2017.

What accounts for Northam’s victory — and the anti-GOP tsunami across the state — is the bigger Democratic vote in the rest of the population — 67 percent in 2017 versus 61 percent in 2013.

It’s also worth noting that Northam did 26 percent better than McAuliffe in the populous D.C. suburbs, 69-30 versus 62-33. Tuesday night, Jerry Falwell, Jr., standard-bearer of Trumpian evangelicalism in the Commonwealth, emitted:

Conflicted, bud? I’m pretty sure the federal employees in Northern Virginia knew exactly what they were doing. 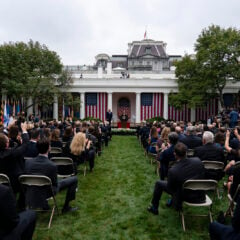 Opinion
Voter guides show the power and duplicity of American evangelicalism
Follow us on Facebook!
Submit your photos to RNS