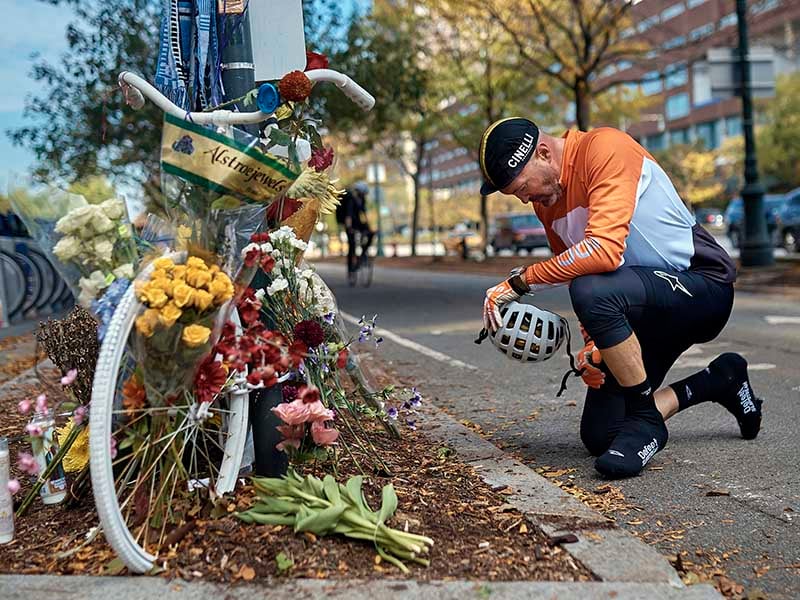 Eric Fleming, 41, stops by to express his condolences Nov. 2, 2017, in front of a bike memorial where people leave flowers to remember the victims of the attack in New York. A man in a rented truck mowed down pedestrians and cyclists along the busy bike path near the World Trade Center memorial on Oct. 31, killing eight and seriously injuring others in what the mayor called "a particularly cowardly act of terror." (AP Photo/Andres Kudacki)
November 9, 2017
Chloe Breyer

(RNS) — The similarities and contrasts of two terrible attacks in recent days — one in Manhattan and one in Sutherland Springs, Texas — begs the question: When do we as Americans pray, and when do we act?

In one case, after a man driving a truck ran over scores in New York City, our president demanded new immigration restrictions immediately without qualms about offending the friends and family of victims, who came from Argentina, Belgium, New Jersey and New York.

And after a gunman attacked a Texas church five days later,  President Trump called for prayers and skirted any discussion of policy change. Conservative lawmakers argued that discussing gun control would be an offense to the 25 people between the ages of 1 and 77 who, like the innocent civilians in New York, were also killed in cold blood.

As an Episcopal priest and director of the Interfaith Center of New York, I believe the dichotomy between prayers and action portrayed in the Twitter feeds of our leaders is a false one and serves neither the dead, the bereaved, nor our nation as a whole. It reveals a narrow view of prayer on the one hand and a shortsighted understanding of action on the other.

Last Tuesday evening (Oct.31), after establishing that friends weren’t in the path of the attacker’s van, I saw an email from a member of the Majlis Ashura (Islamic Council of New York), a fellow member of New Yorker Interfaith Coalition Against Islamophobia. The email read, “I hope and pray someone will be organizing an interfaith vigil.”

Along with the Muslim Community Network and other faith groups, we began a now all-too-familiar drill: Find a location, secure a permit, put up a Facebook invite, get co-sponsors, rent sound equipment, locate electric candles, draw up a speakers list and send out invitations. By early Wednesday morning, a plan was in place.

Who arrives at a moment’s notice to something like this? Who showed up at this vigil on Wednesday night on the steps of Foley Square to commemorate the dead and to pray for the city? Debbie Almontaser, a co-organizer of the vigil and the chair of Muslim Community Network, welcomed the assembled crowd and introduced  Manhattan's borough president. Then came an inspiring slate of diverse religious leaders from all over the city.

We heard from a member of Sadhana: The Coalition of Progressive Hindus, a bicyclist herself who brought her bike up on our makeshift stage as she said her Hindu prayer. Rabbi Sharon Kleinbaum of Congregation Beit Simchat Torah and Evan Bernstein of the Anti-Defamation League offered their Jewish perspective. Three prominent Christian pastors spoke as well: the Rev. Winnie Varghese from Trinity Church Wall Street, the Rev. Jacqueline Lewis from Middle Collegiate Church and the Rev. Kaji Dousa from Park Avenue Christian Church.

Aldo Rafael Perez of the Islamic Leadership Council of New York — in Spanish and English — mourned the dead, prayed for the families, condemned terrorism and gave thanks for the police and first responders who put their lives on the line to stop the carnage.

Family and friends of Nicholas Cleves introduced themselves to us at the vigil. Nicholas was the 23-year-old software developer, Skidmore College graduate and only native New Yorker of the eight people murdered last Tuesday. Bahij Chancey, Nicholas’ childhood friend, carried a piece of cardboard with his name on it and photographs of Nicholas smiling astride his bike. The religious leaders and Nicholas' family and friends read the names of the dead one at a time, by the light of the plastic candles we all held up.

This understanding of prayer — a collective, public expression of grief and solidarity inclusive of Islam, the very religious tradition so desecrated after the suspect, Sayfullo Saipov, reportedly said he committed his atrocities in its name — this vision of prayer that recognizes our common humanity across faith lines and national borders, seems wider than the definition of prayer many of our political leaders express after American mass slaughters.

A narrow understanding of both prayer and action was on display from the White House in the recent inconsistent response to the two terrible tragedies.

According to our national leadership, prayer actually has a narrow and specific meaning: It is something that Christian Americans do when they lose their loved ones to indiscriminate violence. Other prayers, such as those expressed in New York, with the outpouring of grief from Buddhist, Hindu, Jewish and Muslim religious leaders, are deemed less valid.

How else do we explain that in the Sutherland Springs church shooting, the administration deems discussion of policy change as an affront to the prayers of the bereaved? But in the case of New York, the prayers of bereaved families and fellow citizens should apparently not be offended by a same-day call to end the green card lottery.

The prayers and heartache of some were less valid than others and therefore not worth the sign of "respect" that a pause in policy advocacy apparently indicates.

And what about action? The juxtaposing of the New York City and Sutherland Springs attacks again reveals a shortsighted and narrow definition of the word in the mouths of our national elected leaders. The action we need at this time – across both acts of mass violence – is coming together across our diverse backgrounds to find solutions rooted in evidence, not religious discrimination.

We need inclusive prayer and farsighted action together.

Rabbi Abraham Joshua Heschel, the civil rights leader and scholar who marched with the Rev. Martin Luther King Jr., when challenged by some people in his community as to why he would march on the Sabbath, replied famously that he was praying with his feet. Heschel, like King, embraced the prophetic strand of his religious tradition as much as he did the pastoral. He knew his civil rights activism for policy change was sacred because Jim Crow laws and legally justified segregation denied the God-given equality of all people regardless of race, religion, gender or national origin.

With the benefit of hindsight, we know King and Heschel's "actions" to be prophetic. At the time, plenty of their pro-segregationist enemies would have been quick to call their activism disrespectful for whatever reason happened to be lying around at the time.

Policy or action, then, when it is portrayed by politicians as "disrespectful" to the prayers and grief of those who mourn the death of their loved ones in the recent senseless killings in New York and Southerland Springs, deserves a qualifier when it is pronounced as such by our political leaders. What they really mean is "certain policy actions" are disrespectful to "a particular kind of expression of prayer."

(The Rev. Chloe Breyer is executive director of the Interfaith Center of New York and and associate priest at St. Philip's Episcopal Church in Harlem. The views expressed in this opinion piece do not necessarily reflect those of Religion News Service.)