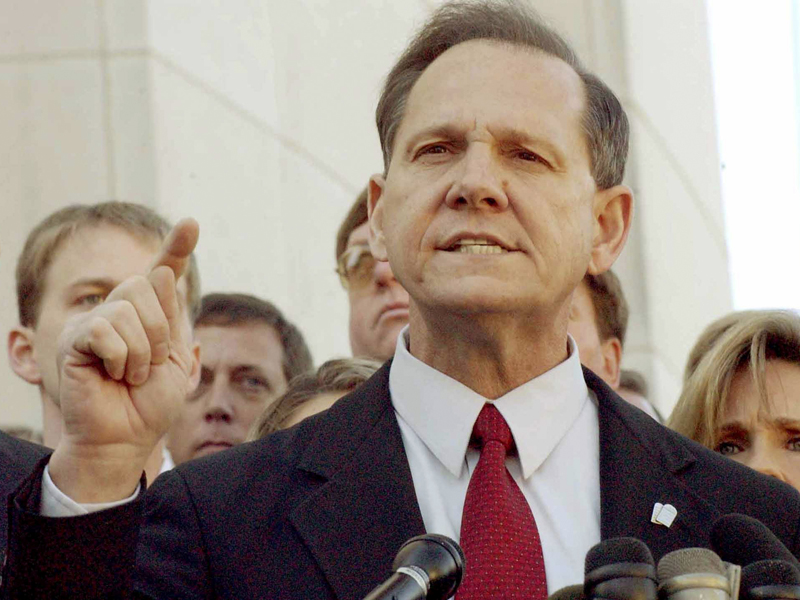 (RNS) — The story of Roy Moore's alleged sexual abuse of a teenaged girl when he was a thirtysomething attorney comes heavily charged with hypocrisy. Lest anyone miss the point, the Washington Post published a sidebar next to its carefully sourced investigative report listing "the many righteous things Roy Moore has said about sex and morality."

But Alabama's Republican senatorial candidate, who made his name by placing a Ten Commandments monument in the state judicial building, is hardly the only hypocrite caught up in the post-Weinstein tsunami of sexual harassment accusations.

Harvey Weinstein himself stood out in Hollywood as a great promoter of women's causes, going so far as to establish a (now rejected) $5 million foundation to support women directors at USC. The foul-mouthed comedian Louis C.K., who joined Moore as an accusee in Thursday's headlines, has, in the words of the New York Times, "built a reputation as the unlikely conscience of the comedy scene."

Then there are the professional moralists.

Tariq Ramadan, who this week received a leave of absence from his Oxford professorship after two women accused him of rape, is an Islamic scholar notable for dispensing a progressive version of the faith critical of its traditional subordination of women. Watch this video of him talking about marriage in Islam earlier this year, and you can see for yourself.

Or take Leon Wieseltier, the New Republic's longtime intellectual-in-chief, now publicly disgraced as an habitual abuser of women at the magazine. The capstone of Wieseltier's career promoting traditional Jewish values is his book Kaddish, a meditation on the year he spent mourning the death of his father; but less attractive and no less revealing is the nasty piece he wrote on Isaac Bashevis Singer after Singer won the Nobel Prize for literature in 1978.

According to Wieseltier, women in Singer's fiction "are only mere sites of iniquity —no more than creation’s most savory forms of pork. It is not a mysticism of love that Singer expounds, but rather a kind of vulgar theological prurience. He has mistaken manhood for grace."

If our supposedly secular culture leaps at revelations of hypocrisy, that's because the concept is deeply embedded in the Abrahamic tradition. The early Hebrew prophets like Amos and Isaiah were all about denouncing demonstrations of piety and religious observance as worth nothing in the absence of righteous behavior.

But biblical Hebrew lacks a term for hypocrisy as we generally understand it. Instead, there is ח.נ.פ, which my Trinity colleague, biblical scholar Gabe Hornung, translates as "haughty" or "profane." Thus, in Job 34:30, Elihu says that God hides his face so that the haughty or profane man [אדם חנף] "reign not, lest the people be ensnared."

The ancient Greek translation of the Hebrew Bible called the Septuagint goes ahead and translates אדם חנף as "hypocrite," which is Greek for stage actor. The generally accepted explanation for the subsequent semantic evolution is that hypocrites, like actors, put on a show of being something they are not.

That's certainly how Jesus uses the term in Matthew 23:27, when he denounces as "hypocrites" the scribes and Pharisees: "for ye are like unto whited sepulchres, which indeed appear beautiful outward, but are within full of dead men's bones, and of all uncleanness."

But lurking within Jesus' usage, and ours, is the old Hebrew meaning of haughtiness and profanity, implying the kind of prominence an actor manifests just by being on stage. A hypocrite, in other words, must be a person of some stature.

We are, then, entitled to consider every sexual predator in a position of power a hypocrite.