(USA Today) — After a more than 140-year relationship, First Baptist Church of Jefferson City and the Tennessee Baptist Convention are breaking up over the church’s decision to hire the first woman to be its senior pastor.

The Tennessee Baptist Convention, made up of representatives from Southern Baptist congregations across the state, opted Tuesday morning (Nov. 14) not to allow members of the East Tennessee church to vote at the convention’s annual business meeting since the Rev. Ellen Di Giosia now leads the congregation.

The decision effectively means First Baptist is no longer a part of the convention, said Di Giosia, who was hired by the church earlier this fall.

Convention, First Baptist differ on role of women in ministry

Di Giosia was one of the seven representatives, or messengers, from First Baptist who tried to be seated as voting members at the annual meeting. The yearly gathering is where messengers vote on church matters such as finances, committee reports and resolutions, and it is being held this week at First Baptist Church of Hendersonville.

Southern Baptists highly value the autonomy of the local church to make its own decisions, but they also believe the Bible dictates who can preach from the pulpit. Earlier this fall, the convention’s credentials committee declared that First Baptist is “not a cooperating church” because its senior pastor is female.

The messengers voted overwhelmingly on Tuesday morning to affirm the committee’s decision by declining to seat the representatives from First Baptist. The vote was not to remove the church from the convention; there is no formal process to do so.

Randy Davis, executive director of the Tennessee Baptist Mission Board, hopes Tuesday’s vote shows that the convention is committed to Scripture. While the convention respects the rights of others to interpret Scripture differently, the convention is firm in its position that only men can serve as senior pastors, he said.

Before the vote, about a half-dozen messengers from across the state rose to the microphones erected in the aisles of the sanctuary and spoke to both sides of that theological disagreement.

Speakers in support of First Baptist highlighted local church autonomy and that God calls women to ministry. One messenger equated the convention’s current position on female senior pastors to its past support of slavery, which the convention has denounced.

Those opposed pointed to the importance of local church autonomy, but also to the convention’s autonomy to set and follow its own rules based on its biblical interpretation.

The vast majority of messengers seated in the rows of pews raised their hands in support of not permitting First Baptist representatives to be seated.

While she was disappointed, Di Giosia was not surprised by the decision given the convention’s history of believing that only men can serve as a congregation’s senior pastor. It would have been easier to stay home, but she and her church’s other representatives came for clarity, she said.

“This is not a battle. This is a disagreement between brothers and sisters,” Di Giosia said. “We had hoped that disagreement did not have to mean a broken fellowship and unfortunately the messengers at the convention did not agree, but now there is clarity for all concerned.”

The congregation, also affiliated with other Baptist groups such as the Cooperative Baptist Fellowship and Baptist Joint Committee, still may decide to continue to financially contribute to Tennessee Baptist Convention’s institutions and mission work, Di Giosia said.

‘The office of pastor is limited to men’

What played out Tuesday morning in Hendersonville is just the latest example of the theological disagreement among Baptists over the role of women as ministers.

For decades, Southern Baptists — who make up the largest Protestant denomination in the U.S., with more than 15 million members — debated the matter nationwide. In 2000, the Southern Baptist Convention amended its “Baptist Faith and Message” statement, or summary of beliefs, to read “while both men and women are gifted for service in the church, the office of pastor is limited to men as qualified by Scripture.”

“We have affirmed the Baptist Faith and Message since 2006 and on four different occasions and four different kind of ways,” Davis said. “We feel like First Baptist Jefferson City chose to go another direction.”

John McGraw, First Baptist’s chair of deacons, and others at the church believe God had a hand in the church’s decision to hire Di Giosia.

“We didn’t choose her because she was a woman. She just happened to have all the best characteristics as a pastor that we needed in our local church,” McGraw said. “There is not one doubt in my mind that God and our church called Ellen to be our pastor.”

(Amy McRary contributed to this report.) 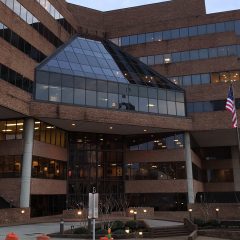 News
Southern Baptists, at impasse, postpone vote on sex abuse probe for a week
Follow us on Facebook!
Submit your photos to RNS