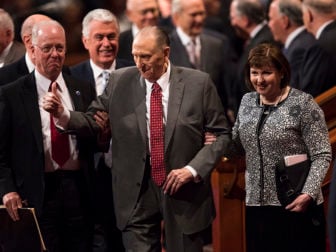 Last month, the LDS Church unveiled another portion of the sweeping curriculum changes for adults that are planned for next year, and I have mixed feelings. I’ve waited to write about this because I was trying to learn more and keep an open mind about the coming changes. Maybe next month when the new curriculum gets going, I will feel differently, but right now what I am experiencing is disappointment.

Just as background: for the last two decades the women’s Relief Society and men’s priesthood curricula have focused on the teachings of the presidents of the Church, from Brigham Young to Gordon B. Hinckley. Even Howard W. Hunter got a whole year devoted to him, which is longer than his nine-month tenure as the head of the church.

But we’re running out of modern prophets, so we need something new. Enter the “Come Follow Me” program for 2018 for all adult men and women of the LDS Church around the world. The Church’s website says the curriculum will emphasize three things:

Here’s how those goals will be implemented from week to week:

No one I’ve talked to seems to know yet what the first Sunday will look like. “Counseling together about local needs” could all too easily devolve into “Gossiping as a group about anyone who has not come to church lately,” so I hope we’ll be getting some more specific direction soon.

It’s weeks 2, 3, and 4 that worry me. My current calling is as a Relief Society teacher in one of those weeks, so I have a dog in this fight. (Though I wonder if I will still have that calling after this post!)

So while I like the idea of studying a single topic in depth for several months – and I love that the inaugural fourth-Sunday topic is going to be the Sabbath, which is the spiritual practice I most cherish – I’m not optimistic that three out of four Sundays, we are basically going to be rehashing Conference talks.

There are some positive developments here too. For example, local teachers will be empowered to decide for themselves which Conference talks would be most helpful or applicable for their contexts for those middle weeks of the month. I had been bracing myself to receive a list of three or four assigned Conference talks that would be the same all over the world, whether church members are in Manila or Manti. So I think it’s great that local Relief Society presidents and priesthood leaders can choose the ones they feel are most applicable. (Other good news: Now that the women’s session is considered part of General Conference, we’ve more than doubled the number of possible talks by women that will be in rotation as possible choices.)

It’s interesting that the Church is doubling down on this practice of emphasizing Conference talks. Actually, make that “tripling down,” because we’ve gone from having one Sunday a month set aside for that purpose to three.

I would guess the new move reflects an underlying anxiety that members are not paying enough attention to Conference, a suspicion that’s borne out by research conducted among U.S. Mormons, particularly younger ones (see here and here).

But lessons based on Conference talks are difficult to teach because the talks were never designed for the vibrant give-and-take that marks an informative and thought-provoking class. Even the most compelling sermons in Conference don’t necessarily translate into interactive or memorable discussions.

As a pedagogical practice, teaching again and again from Conference talks is also a continual echo chamber: we quote two or three church leaders, who quote and effusively praise other church leaders. The narrowness is intensified by the longstanding cultural expectation (which I do not adhere to when I teach) to avoid bringing in outside sources to supplement the material.

Focusing the new curriculum almost solely on Conference talks makes it even harder for members who have questions or doubts to actually voice them. If you disagree with anything in the lesson material, this curriculum is set up so you’re not just disagreeing with an idea, but potentially challenging the authority of someone the church has sustained as a prophet, seer, and revelator. This is hardly an incubator for encouraging anything other than comments that uphold the status quo.

Upping the ante so that those who question will now feel even less welcome in church is exactly the opposite of where we need to be going. Lessons in Relief Society, priesthood, and Sunday School should be safe places where people feel free to bring their actual broken selves, and raise any of the questions that may be plaguing them. The new curriculum does not look like it will be facilitating that kind of exchange, though I hope I’m wrong about that.