Sproul died Thursday (Dec. 14) at an Altamonte Springs, Fla., hospital, his ministry announced. He was hospitalized with severe respiratory problems that were complicated by chronic obstructive pulmonary disease and the flu.

Sproul was known for his worldwide radio broadcast, “Renewing Your Mind,” as well as books such as “Everyone’s a Theologian,” “Defending Your Faith” and “Abortion: A Rational Look at an Emotional Issue.”

“For more than five decades, the Lord has used Dr. Sproul to spread the life-changing truths of biblical Christianity and to expose people to the grace and the knowledge of the Lord,” said Jerry Johnson, president of National Religious Broadcasters, which inducted Sproul into its Hall of Fame in 2016.

“From the inquiring skeptic to the growing Christian, Dr. Sproul has impacted countless lives,” Johnson said.

An ordained minister in the Presbyterian Church in America, Sproul was a co-pastor of St. Andrew’s Chapel in Sanford, Fla. From the pulpit and through his broadcasts, he attempted to draw Christians into serious study and interpretation of the Bible, said Mark Pinsky, a longtime Central Florida religion writer.

“His preaching was similar to his radio show,” said Pinsky. “He had a kind of growly, garrulous delivery, which was particularly engaging because he had a good sense of humor to go along with it.”

Though not a household name like evangelists Billy Graham or Rick Warren, Sproul was heralded for his reach – from everyday radio listeners to seminary presidents to Christian rappers.

“I am grieved to hear of the death of R.C. Sproul,” tweeted Russell Moore, president of the Southern Baptist Convention’s Ethics & Religious Liberty Commission. “It is hard to overestimate his influence on gospel-resurgent evangelicalism.”

Early in my ministry I was discouraged, about to quit ministry. I went to a @Ligonier conf in Memphis, heard R.C. Sproul and @JohnPiper preach on God and providence. God used that to keep me in ministry. Changed my life.

Sproul’s ministry, in a statement announcing its leader’s death, noted his efforts to teach classical Christianity to as many people as he could. Sproul served as chancellor of Reformation Bible College, which was founded in 2011 as an extension of Ligonier Ministries.

“Known to millions of Christians as simply ‘R.C.,’ he was used of the Lord to proclaim, teach, and defend the holiness of God in all its fullness,” his ministry said. “Through his teaching ministry, many of us learned that God is bigger than we knew, our sin is more deeply rooted than we imagined, and the grace of God in Jesus Christ is overwhelming.”

In what appears to be his last tweet, on Dec. 1, Sproul wrote about his belief in eternity:

“When God writes our names in the ‘Lamb’s Book of Life,’ He doesn’t do it with an eraser handy. He does it for eternity.”

News
Ron Lindner, professional angler who inspired many with his fishing and faith, dies at age 86 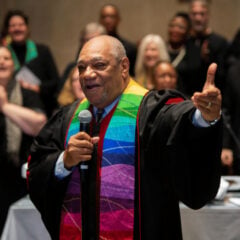