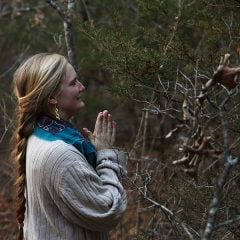 In preparation for the Yule celebration, Darcy Higgins asks a tree for permission to cut it down so it may serve as the Yule tree at Oak Spirit Sanctuary in Boonville, Mo., on Dec. 16, 2017. Higgins said that she always asks permission before harvesting plants or trees and that her own feelings let her understand the plant’s response, as do ecological indicators — such as how well the plant is thriving in its current environment and how well the environment would do without the plant. RNS photo by Mikala Compton Kerry Lynn, Kenny Easter and their grandson, Jaxson Kasten, 2, decorate the Yule tree during the Yule celebration. The Christmas tree derives from the tradition of pagans, who brought evergreen trees inside their homes as a reminder of the coming spring, when other flora will bloom again. RNS photo by Mikala Compton 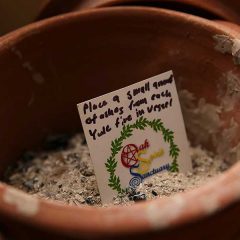 Ashes from the past 20 years of Yule celebrations are kept in a vessel at Oak Spirit Sanctuary and considered sacred. Every year members of the sanctuary burn Yule logs from the previous year’s Yule tree in the ceremonial fire. RNS photo by Mikala Compton 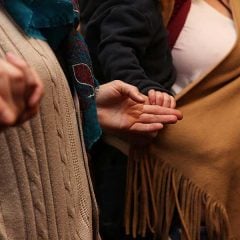 Bridget Hussey writes her intentions for the new year on a piece of paper before the members of Oak Spirit participate in ritual. Hussey, of Fayette, Mo., has practiced Wicca for 30 years, but this Yule celebration was the first time she ever attended a group pagan event. Hussey described her experience as powerful and said the celebration made her feel less alone in her practices. RNS photo by Mikala Compton 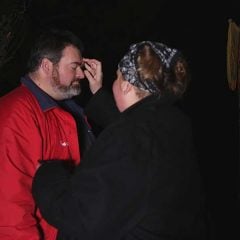 “Salient,” who prefers to be identified only by this “magic” or pagan name, receives a blessing before entering the ritual circle during the Yule celebration. Before a pagan ritual, practitioners “cast a circle.” Then different deities are called upon, usually depending upon the season and the celebration. The goddess Brigid was called on for this ritual because she is the goddess of fire, and the ritual focused on the light to come in the future after the end of the winter solstice. RNS photo by Mikala Compton Brian Stanely, dressed as Father Yule, lights candles on the Yule log during the celebration. Community members wrote their wishes for the new year onto pieces of paper, which were then placed onto the log. RNS photo by Mikala Compton Ambiaka Maupin and Brian Stanely, dressed as Father Yule, celebrate after throwing the Yule log into the fire during the ritual. They wrote their wishes on paper, placed them onto the log, and then threw the log into the fire, believing that burning the wishes releases their energy into the atmosphere. RNS photo by Mikala Compton 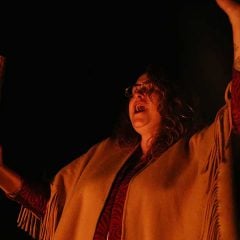 Kerry Lynn lifts her hands in praise while the Yule log burns in the ritual fire. Lynn is the president of the Oak Spirit Sanctuary board and often organizes their monthly gatherings. RNS photo by Mikala Compton 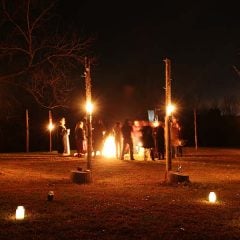 Community members celebrate around the fire after the ritual during the Yule celebration at Oak Spirit Sanctuary in Boonville, Mo., on Dec. 16, 2017. RNS photo by Mikala Compton

BOONVILLE, Mo. (RNS) — The pagans at the Oak Spirit Sanctuary decorate their trees, hang wreaths and tell the story of Santa Claus. But unlike Christian Americans this time of year, pagans are celebrating Yule.

Yule honors the winter solstice — the longest night of the year — when pagans focus on the sunlight to come after a season of dark, and engage in rituals that predate Christianity’s adaptation of these practices.

To pagans, the Yule tree, wreath and candles remind that spring is around the corner.

Though the longest night of the year falls on Dec. 21, the celebrations at Oak Spirit came early this year — on Dec. 16 — when more people could participate.

News
Stormy Daniels’ religious beliefs under scrutiny as federal trial against Avenatti begins
Follow us on Facebook!
Submit your photos to RNS